Apple is Considering a new Method of Constructing iPhones

Today the US Patent & Trademark Office published a patent application from Apple that relates to a different method of construction iDevices like an iPhone. The design includes a multi-segment housing that includes multiple conductive segments that are structurally coupled by one or more non-conductive housing segments or splits. The non-conductive housing segment may be formed from a polymer having an array of fibers dispersed within the polymer.

Apple notes in their patent background that portable electronic devices have become more compact over the years. There is an increasing need to make housings that are both aesthetically pleasing and structurally robust. Some traditional housings are formed from a single material in order to simplify manufacturing and assembly. However, a single piece housings may not provide some of the structural and/or aesthetic benefits of a multi-segment housing.

Apple's invention covers multi-segment housings that include multiple conductive segments that are structurally coupled by one or more non-conductive housing segments or splits.

The non-conductive housing segment may be formed from a polymer having an array of fibers dispersed within. The fibers may be aligned along one or more fiber directions, which may be substantially perpendicular to an exterior surface of the housing.

Some example embodiments are directed to an electronic device having a display and a housing at least partially surrounding the display. The housing includes a first housing segment defining a first portion of an exterior sidewall of the housing and configured to operate as an antenna.

The non-conductive housing segment is formed from or comprises a polymer material having an array of fibers that are substantially aligned along a fiber direction that is transverse to the third portion of the exterior sidewall. 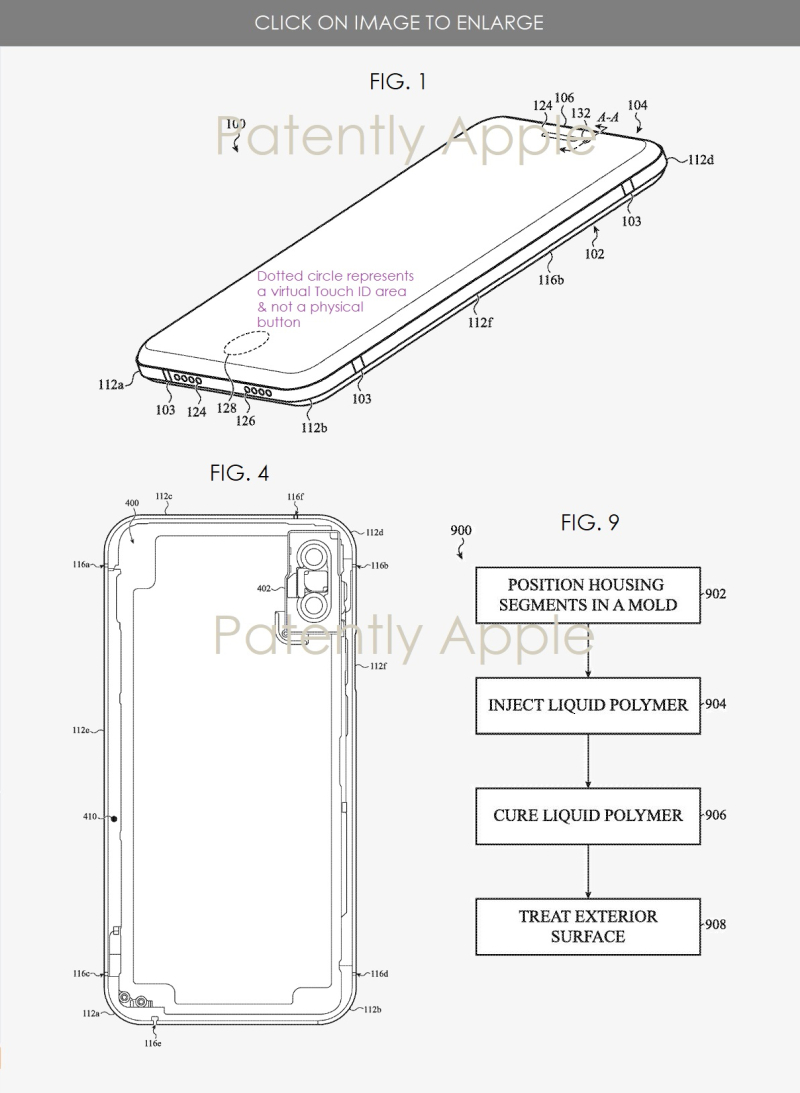 In some embodiments of the devices and housings described herein, multiple housing segments disposed along a sidewall of a device housing may be operated individually or simultaneously as antennas.

Although the main focus of the invention is a possible future iPhone with this new construction, Apple notes that the design could be used for a tablet computer, portable computer, portable music player, health monitor device, portable terminal, or other portable or mobile device.

For the record, anyone understanding patents knows that any part of a design that is illustrated with a dotted outline means that it is not a feature physically "seen." While this is more common in design patents, the principle remains the same. By illustrating a circle with a dotted outline clearly implies that there is a virtual biometrics area on the face of the proposed design construction.