Late yesterday Apple filed for the trademark "Deep Fusion" in both the European Union and Hong Kong, China. It's a camera feature that is bound to improve over time as processors become more powerful. It's a method of capturing an image on the iPhone 11 that sits between Smart HDR used for bright light and Night mode for shooting in the dark. The iPhone 11 camera, since iOS 13.2, automatically turns on this feature if the lighting meets certain criteria and iPhone settings are set properly.

Phil Schiller: Deep Fusion "shoots nine images, before you press the shutter button it’s already shot four short images, four secondary images. When you press the shutter button it takes one long exposure, and then in just one second, the Neural Engine analyzes the fused combination of long and short images picking the best among them, selecting all the pixels, and pixel by pixel, going through 24 million pixels to optimize for detail and low noise, like you see in the sweater there. It’s amazing, this is the first time a Neural Processor is responsible for generating the output image. It is computational photography mad science."

Below is a video of Apple's Special Event that introduced the iPhone 11 with a Sneak Peek at the feature known as "Deep Fusion." The video is set to begin exactly as Phil Schiller begins to talk about this feature so as to not waste your time. This segment ends at the 1:23:20 mark. 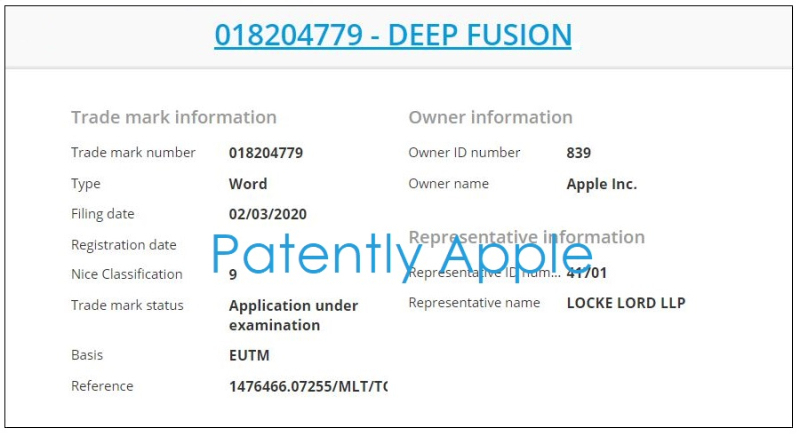 The image below representing the trademark was filed in Apple's Hong Kong filing made by Apple's representative Baker & McKenzie.

Apple filed for "Deep Fusion" under International Class 09 with details as follows:

Apple also filed for this trademark in Hong Kong under application number 305207337 with the same International Class 09 but with at least 5 times the detail that is complete overkill.

The Hong Kong filing throws in ridiculous filler such as "electrified fences; portable remote-controlled car retarders; radiological apparatus for industrial purposes; lifesaving apparatus and equipment; whistle alarms; animated cartoons; egg-candlers; dog whistles; decorative magnets and so forth which have nothing to do with "Deep Fusion."