Home Archives Contact Us Subscribe Twitter MeWe Facebook Patently Mobile
After Switching to iPhones in 2018, the NYPD will be getting a Digital Notebook App that will finally eliminate paper Pads
Apple Developer News reveals that they've reversed course on charging twice for merged Mac, iOS apps and more

Patently Apple posted a patent application report last week titled "Apple Patent Reveals Apple Watch's Digital Crown being eliminated and replaced with an Optical based System." Today the US Patent & Trademark Office published a patent application from Apple that reveals another Apple engineering team is working on making the Digital Crown more relevant by adding Touch ID to the mechanism.

The crown may include a light-directing feature configured to direct, onto the image-sensing element, an image of an object in contact with the imaging surface, such as a finger.

A series of patent figures beginning with FIG. 3 illustrates is a partial cross-sectional view of an example wearable electronic device having a crown with a light-directing feature and a user rolling their finger across the unit that will obtain biometric as a form of Touch ID. 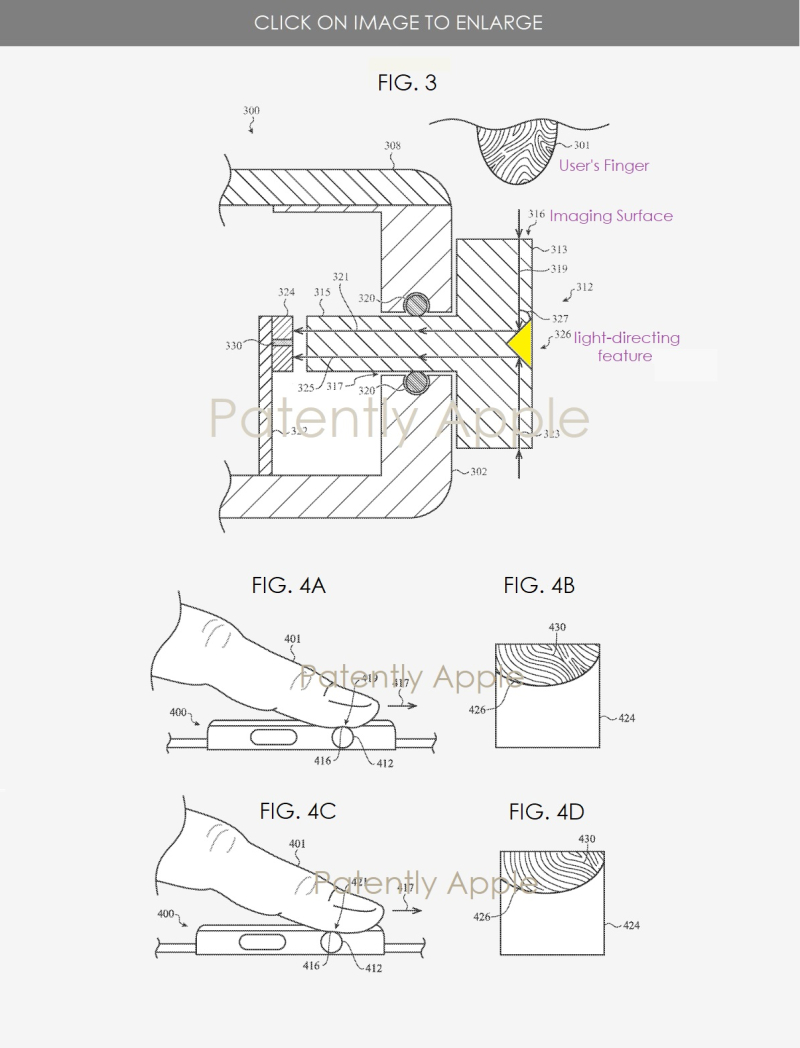 Apple specifically states that "Apple's patent FIGS. 4A to 4D show a bare finger and a fingerprint." Apples patent FIG. 4A above shows Apple Watch (#400) receiving an input from a finger (#401); FIG. 4B shows an example image-sensing element (#424). As the user's finger rolls over the Digital Crown, the features of the user's finger that are visible to the image-sensing element pick up the ridges or other features of the skin of the finger.

A crown, and more particularly, a head of a crown, may also be shaped or configured to act as a lens to aid in the image sensing functionality of a device.

Apple's patent FIGS. 5A to 5D below illustrate how a lensing feature on a crown may enable a device to reject or otherwise ignore images that do not correspond to a finger in contact with the crown. For example, a lensing feature may be configured so that only objects in direct contact with the crown are in sharp focus. FIG. 5A, shows an example electronic device 500 receiving an input from a finger 501.

Apple's patent FIG. 5C shows the Apple Watch (electronic device #500) with the finger (#501) elevated a distance off of the imaging surface #516 (e.g., moved in a direction indicated by the arrow #517). The crown (#512) may have a shape or feature that acts as a lens so that objects that are not in direct contact with (or within a threshold distance of) the crown are out of focus. The threshold distance may be about 0.1 mm, 0.5 mm, 1.0 mm, 2.0 mm, or any other suitable distance. 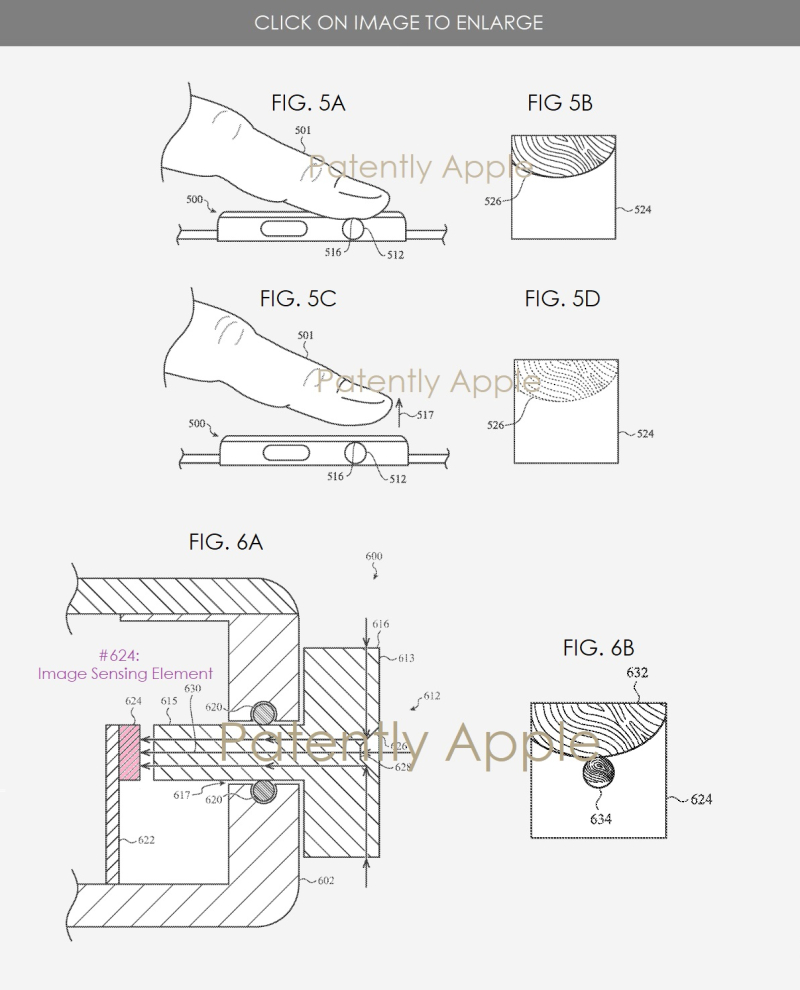 Apple's patent FIG. 5D shows a representation of an out-of-focus image #526. The image sensor may be able to ignore the motion of images that are not in focus, thereby preventing images from the surrounding environment from triggering inputs to the device. In some cases, instead of or in addition to a lensing feature, the device may use a contact sensor to determine when an object is in contact with the crown and ignore image motion when there is nothing contacting the crown.

Apple's patent FIG. 6A above illustrates an Apple Watch (#600) with an optical crown that incorporates both optical gesture sensing (as described above), as well as axial touch sensing.

Apple's patent FIG. 6B above shows a representation of the image-sensing element (#624) showing example images (#632, #634) corresponding to a gesture applied to a peripheral surface of the crown (image #632), and an axial touch input (image #634).

The Apple Watch may take any suitable action in response to detecting an axial touch input, such as turning on or off the device (or a display of the device), selecting a user interface element being displayed on the display, activating or deactivating a device function, or the like.

Beyond Touch ID that requires a bare finger, Apple notes that their light system will work with a glove for other gestures such as turning on or turning off the Apple Watch display and more.

Apple's patent application 20200041962 that was published today by the U.S. Patent Office was filed back in Q4 2018. Considering that this is a patent application, the timing of such a product to market is unknown at this time.