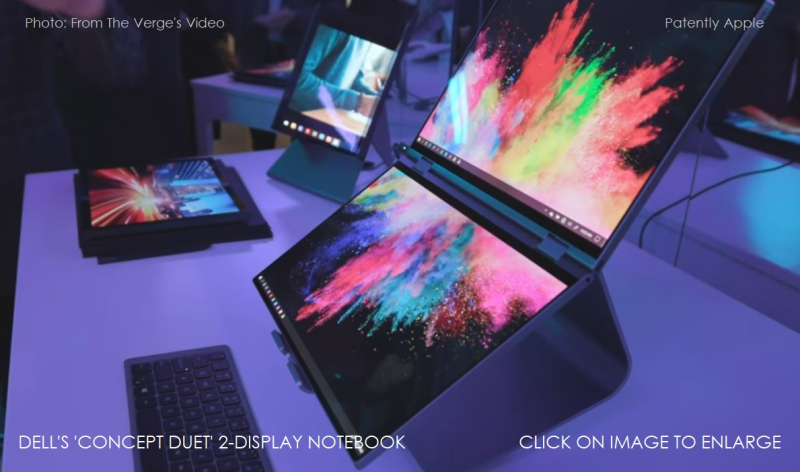 Back in early October Patently Apple posted a report titled "Microsoft is set to Attack Apple during Holiday 2020 with an All-New Foldable Tablet and Foldable Phone." Our report covered Microsoft's 2020 Surface Duo, a dual display smartphone that folds. We also covered the Surface Neo, a dual display foldable tablet. If you've never seen the Microsoft foldable tablet, the video below provides a quick overview of what should be arriving in Q4 2020.

The chief product officer of Microsoft's Devices group, Panos Panay stated during his October keynote that the reason for the delay to market was because developers needed time to write great apps for their new hardware and software / Windows 10X, Microsoft's new mobile OS.

Our report covering the Microsoft event added that another possible reason for the delay was Microsoft wanting to give their Wintel partners time to finish their own foldable products that will be coming to market next year.  The idea, in theory, is to make a huge impact on the market with Microsoft, Lenovo, Dell and other Wintel partners delivering next-gen foldables at one time that are all Wintel based. That was stated because we reported in September that Microsoft and Intel were writing and setting the standards for future foldable devices. Why create standards if there aren't partners to support them. 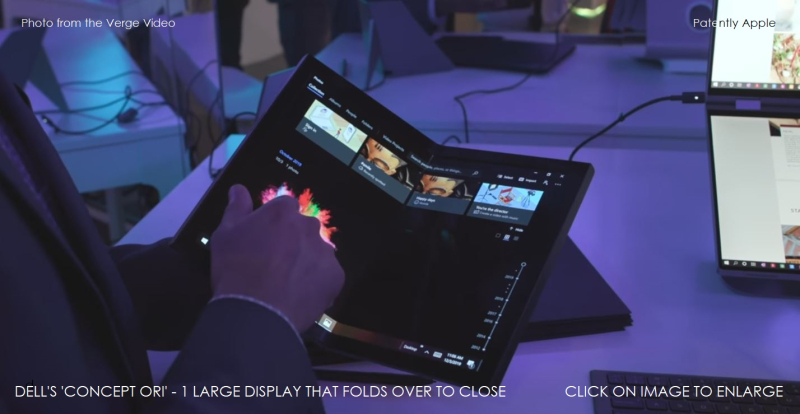 Dell's second unit is called 'Concept Duet' which resembles that of Microsoft's Surface Neo with a slightly different hinge. Many of the demonstrations seem to show features that were first presented for the Surface Neo.

Even Dell's magnetic keyboard that they presented today mirrors the one that Microsoft first presented in October that's in the video at the top of our report. It's a keyboard that could slide up the second display which automatically creates a virtual trackpad below the keyboard to operate it as a full notebook. Below is a video provides a peek at the devices via The Verge.

Back in May 2019 Patently Apple posted a report titled "Lenovo Released the World's First Foldable Notebook Prototype that could Debut sometime in the 2020-2021 Timeline."

The report covered the upcoming Lenovo ThinkPad X1 Foldable notebook, photos, a video to remind you what Lenovo actually delivered along with a few links to Apple patents to prove that Apple has been working on this far ahead of Microsoft. Microsoft is very good at picking up on ideas that Apple filed patents for and racing them to market to make it their idea.

With that said, Lenovo has made it official, to at least Engadget, that they'll be launching their foldable ThinkPad X1 later this year, likely in Q4. Engadget's Cherlynn Low reviews it once again at CES 2020 in her latest video report below.

While I'm not quite sure that the one-full-display foldable concept that Lenovo and Dell are marketing is one that Apple has much interest at the moment, the dual display notebook concept with the keyboard area being used as a second LED display may be something that Apple could deliver over time and very quickly if need be.

Apple has the patents supporting the concept (01, 02, 03, 04, 05 and more) with one dating back to 2011. Yet Apple is likely to sit back and watch how the market reacts to these next-gen foldables before committing to their first dual display MacBook.

Microsoft is a little more desperate, a little willing to go on the bleeding edge in order to beat Apple to market with something new to gain the respect of the market for being innovative with next-gen hardware, pushing Apple to the position of being a market follower.

The last decade belonged to Apple with their iPhone, iPad and Apple Watch dominating market trends. Wintel is determined to not let that happen again and are out to lead the next decade to make up for their past failures of falling asleep at the wheel while Apple crushed their skulls into the ground.

If anything, the announcement at CES 2020  could make this year very interesting, especially for the all important Q4 holiday season. Let the games begin.