With Apple being out of stock before Christmas, parents were scrambling to find AirPods-like products for their kids and hopefully at a discount. Although Apple couldn't keep up with demand for AirPods Pro, Chinese companies easily jammed the market with knock-off products.

While it's always buyer beware when you're buying knockoff products, Christmas puts a lot of pressure on parents trying to give their kids what they want. As long as they look like AirPods, it's good enough, especially for parents with a tight Christmas budget.

A Mom in Toronto, Canada, learned very quickly that the knockoff product she purchased, the i7S wasn't only a knockoff but a fire hazard.

According to a CTV News report, An Ontario woman has issued a warning to consumers after ear buds she purchased at Canadian Tire caught fire on Christmas Day.

Mom-of-two Nicole Tarkovits bought a pair of wireless ear buds, similar to the much coveted and expensive Apple AirPods, from Canadian Tire in Cambridge, Ont., as Christmas gifts for her children.

She said her daughter’s pair caught fire after "half an hour" while charging for the first time. 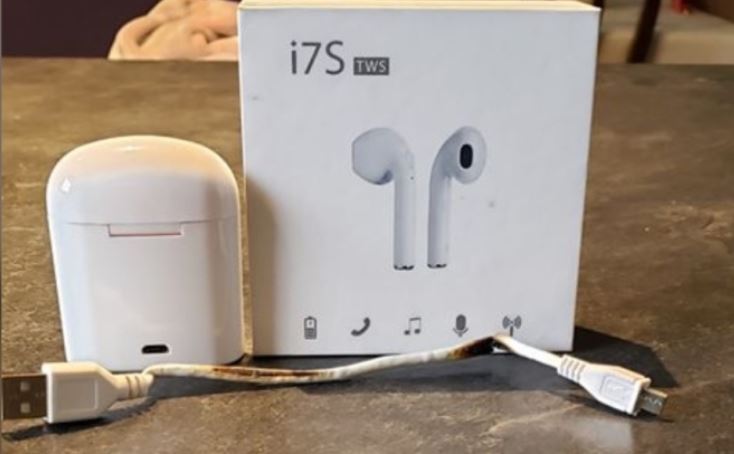 Nicole Tarkovits recounted: "I had 20 people here cooking. I was trying to figure out where the burning smell was coming and I just caught it." Nicole added that her daughter’s pair caught fire after "half an hour" while charging for the first time. "We were very lucky we were home."

Tarkovits caught the source of the burning before there was any damage to her home, but the charging cable is clearly charred. She immediately posted a warning to her local consumer Facebook group.

The box for the buds bought at Canadian Tire is labelled 'i7S TWS,' with no name. According to Tarkovits there is no information on where the product is manufactured other than “Made in China." For more, read the CTV News report.

It just so happened that Unbox Therapy posted a video yesterday on testing fake AirPods Pro. The host Lewis (Lew) Hilsenteger early on in his report recounted his coverage of one knockoff product called 'BlackPods," a knockoff of Apple's standard AirPods.

Lew never warned potential buyers on his show to beware of knockoffs and some of his fans who tried to buy the BlackPods either never got the right product or just got ripped off, and lew, after the fact, issued a warning and repeated it at the end of his show.

Lew tried to brush off the blame, but it was Lew who highlighted this product and should have apologized for not providing an appropriate warning about knockoff products or appropriate contact information to assist those who got ripped off. Lew promoted the product for the sake of clicks and some of his own fans got burned by trusting Lew.

With that said, Lew presents a number of the fake AirPods Pro products in his video report below which goes to show you just how many Chinese companies raced to copy Apple's hot product in time for Christmas.

At the end of the day buyers of Apple product knockoffs beware. Companies who make knockoff products are in it for the money and couldn't care less if your house burns down or if the product dies after a month's usage.