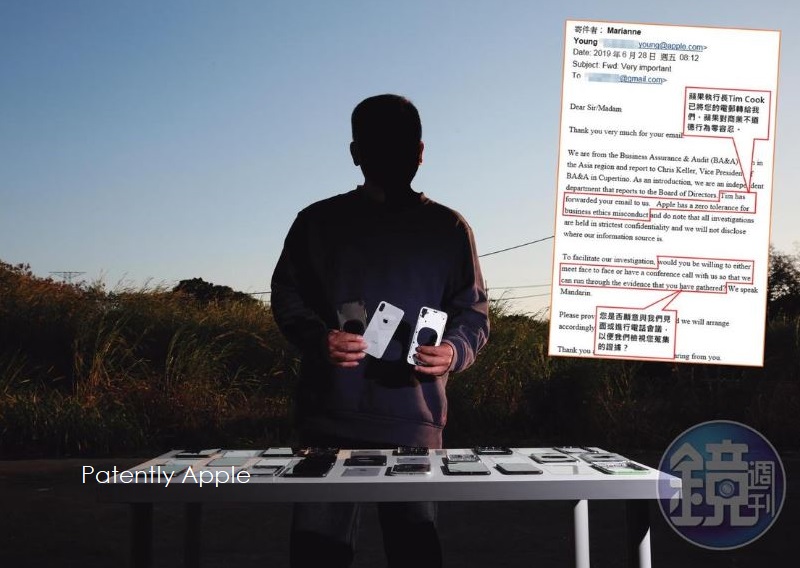 A Taiwanese Magazine reportedly has the scoop behind a potentially explosive story about fraud being carried out by a bussinessman who worked with Foxconn employees to supply him with defective iPhone parts that he then sold at retail prices that were attractive to Taiwanese consumers. The magazine hides the identity of this businessman including his face in photos. The magazine simply calls this individual "Mr. X." While it is difficult to know how much of the following story is true at this time, Hon Hai knows that this is a big story in Taiwan and has agreed to, in a prepared statement, to conduct a full investigation of the matter.

Earlier this morning Patently Apple posted a report titled "Apple's Device Maker Foxconn Launches a formal investigation into Employees who sold iPhones with Defective Components." At the time I thought this was the full story, as it was from one source.

However, in digging into this story a little deeper, I discovered that our story only covered a basic overview of the bigger story. The original source actually covered the breaking story in 8 parts. Our updated report below highlights parts of the eight part-report from Taiwan that's quite an eye opener.

The report noted that "Mr. X, a Taiwanese businessman, laid out a dazzling array of iPhone components on the table [as presented in our cover graphic], including mobile phone panels, cases, and sapphire glass. Among them, the 'back cover assembly' was the largest case, and he broke the news to [this magazine].

"The back cover assembly is highly profitable and simple to handle, so we started to specialize in this project 3 years ago. The back cover we got from the Foxconn Zhengzhou factory has iPhone 8, 8 Plus, small 8, X series, and the aluminum frame of the iPhone X. We sold 300,000 units."

Mr. X revealed that insider theft of components was about a US$3 Billion dollar loss for Apple and a major hit to the image of the Hon Hai Group who owns Foxconn. 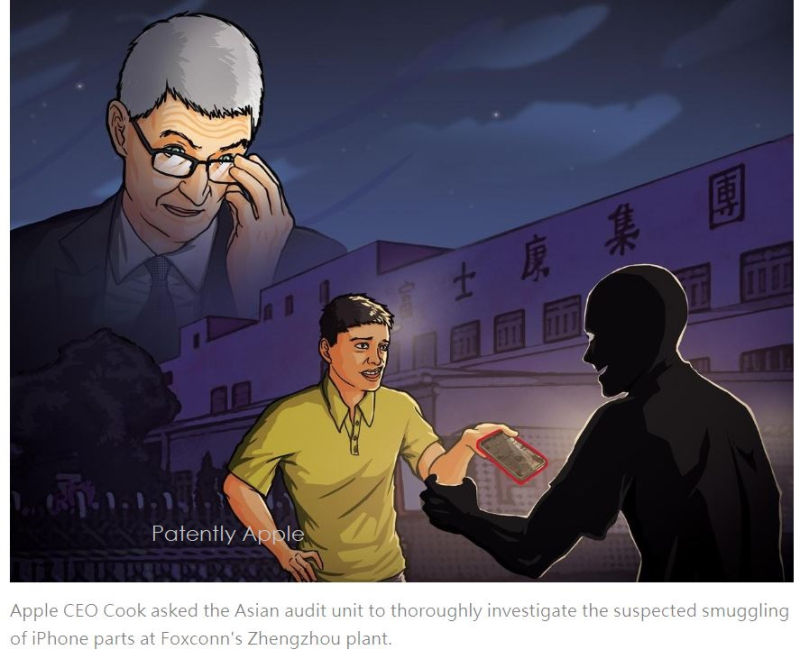 Mr. X has reportedly gotten out of this business without explanation. After dropping out he notified Apple and sent them an email report outlining the scam going on at Foxconn plants. Apple's CEO took it seriously enough to ask for an Asian audit unit to conduct a thorough investigation. Below is another image from the report this is reportedly from the Asian audit unit. 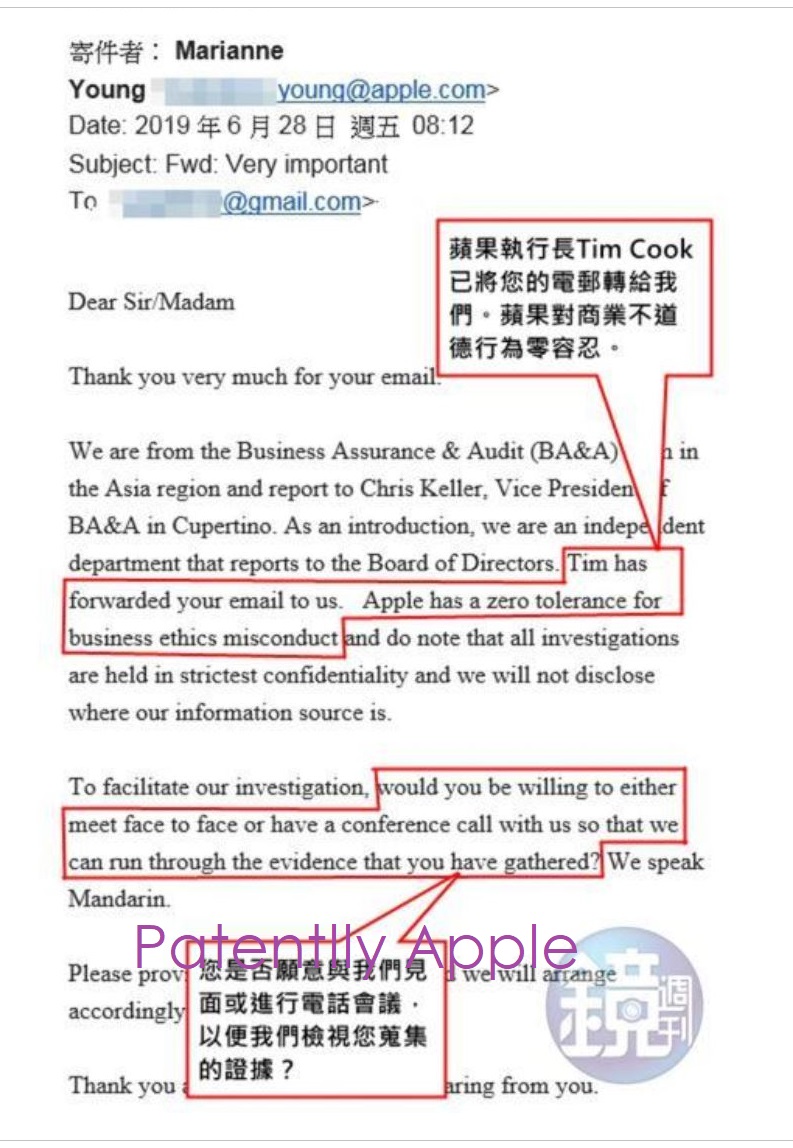 In part two of the report, Mr. X tells the magazine in Taiwan that he was able to successfully enter the Zhengzhou factory by relying on a mainland-born manager the he calls "Wu." He introduced Wu through a friend, and then introduced several subordinates to dock with him. Before taking the goods, he could also enter directly. Foxconn warehouse to see the goods.

Mr. X then revealed that when viewing the goods at Foxconn's Zhengzhou factory, the staff inside the factory would ask them to turn off our mobile phones, but Mr. X still took the opportunity to secretly take a video of the factory inspection, as shown below. He described there being ten cartons placed on a pallet, and the large FOXCONN (Fujiconn) was printed on the outside of the boxes. 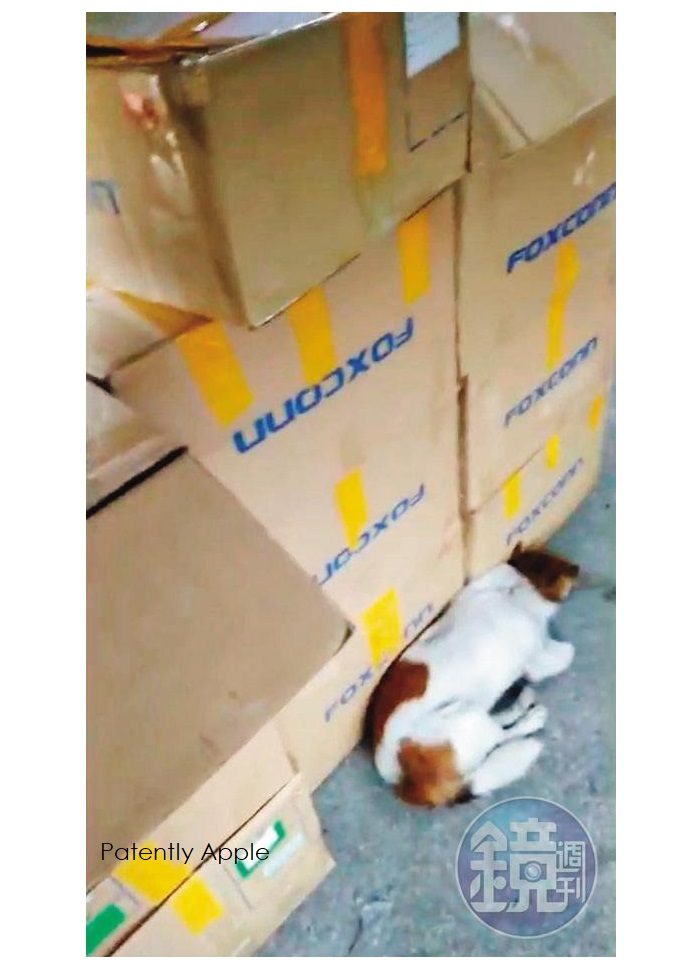 Mr. X then described how transactions took place. The translation is a bit choppy. "We place an order after inspecting the goods and call the truck the next day. The two parties will pick up the goods in a secret house outside the factory. After the inspection, we will pay the cash directly to the connector, and then we will sell the components to fixed-distribution dealers, and eventually they are sold to the whole mainland and indirectly to Taiwan."

The report then noted that Mr. X "cited the latest iPhone XR as an example. Most of the related components were assembled at the Foxconn Zhengzhou factory, with a yield of about 93%, that is, 7% defective products. According to regulations, these defective products must be destroyed, but his team has a way to get the un-destroyed defective products, which can be turned into good products and resold for profit."

As you can see in the photo below, Mr. X explained how they also took advantage of Apple's high repair costs. They sorted out defective parts and sold them as new to repair shops at a discount. 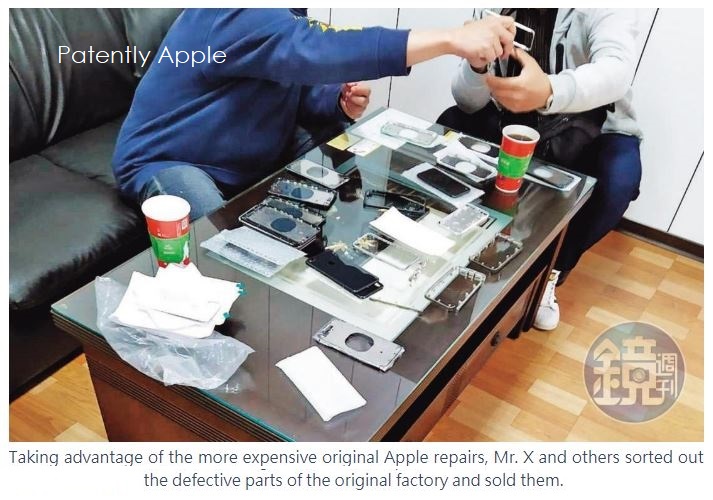 Mr. X added that Apple's original warranty price is high. Many people's iPhones have gone beyond the warranty period and will seek out non-original repairs for the sake of cheapness. Most of these folk mobile phone repair shops supply materials to the mainland. It is difficult to tell whether the store's materials are original or fake.

That admission by Mr. X almost makes Apple's case for fighting the Right to Repair movement. How can Apple device owners be sure that the parts being put into their devices by a repair shop are a) new, b) not defective, and c) not stolen? Below is a photo from the report showing one of the Foxconn parts of an iPhone. 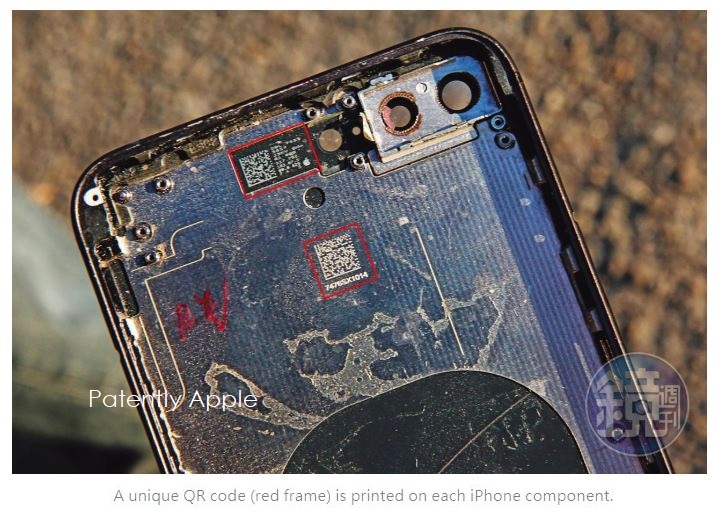 Today, Mr. X has accused the Zhengzhou factory of having unscrupulous managers who have not destroyed the defective products in accordance with the regulations for many years, but instead sold them for profit.

In the big picture, Mr. X points out that while his business was huge, the fact is that the Foxconn Group is huge and has a large number of employees, making it difficult to manage. In 2013, Hon Hai Shenzhen Guanlan Factory had 8 mainland employees, including Cai Yiwei, an assistant manager, and engulfed 2,000 iPhone 5, iPhone 5s tests. And then resell it for profit.

Earlier in 2014, an employee named Qiao from the iPhone 6 Foxconn Jincheng factory also stole the iPhone 6 mobile phone case from the factory and sold it to Shenzhen Huaqiang Electronics Market.

In 2015, Taiwan membership also appeared. The deputy manager and the factory security shipped out 5,000 iPhone 6 handsets from Foxconn's Zhengzhou factory for a private profit.

The report closes off in part 8 with Hon Hai's official response to the news as follows:

1) Hon Hai has always followed strict company policies and does not comment on any rumors, speculations about customers or its product lines. The related weekly reported on Group News on December 18. The verification process was only by phone and email text snippet messages, that is, a response was required within a two-hour time limit. Based on the truth-seeking facts, the company has started to check the SOP for the first time, but there is no clear conclusion yet. It is difficult to cooperate with the media deadline.

2.) The Company has always followed the Code of Integrity Management, and all employees are required to abide by workplace ethics and related norms. Therefore, regardless of whether the content of the weekly magazine is true, the company is willing to face and inspect with the most rigorous attitude. The inspection procedures are also reported to the relevant units for investigation. Once it is found to be true, the company will never leniency. [Obviously some part of the ending of that statement got lost in translation.]

At the end of the day, as the Taiwanese magazine points out, there have been many incidents of fraud occurring at Foxconn plants over the years and so this detailed account of yet another one appears to be credible. Did the magazine sensationalize the story, inflate maters at times, perhaps. These kind of stories are designed to sell magazines. Yet with Hon Hai stating that an investigation is under way, the story must have a kernel of truth.

Still, the one gaping hole in this story is not knowing what moved Mr. X to get out of his lucrative business and immediately turn on Foxconn. Unless Mr. X got some form of immunity from Taiwan officials that's not being reported on, there's a gap in the story that at some point will have to be answered. Perhaps there's still a final chapter in the making.