On Monday Patently Apple posted a report titled "Apple's Timing for a 5G iPhone is seen to be Wise as 5G modems today aren't providing true 5G Connectivity." We noted in the report that "Multi-band 5G modems will only arrive in the market in 2020 and Apple's 5G iPhones will be amongst the best."

Today its being reported by PCMag.com that Qualcomm President Cristiano Amon has confirmed at Qualcomm's Snapdragon Tech Summit that Apple and Qualcomm are working on launching a 5G iPhone "as fast as we can." Amon Added that "We're very happy with the progress we're making, and I expect that they're going to have a great device."

Amon broke down some new details on the two companies' "multi-year" licensing agreement. While the first 5G iPhone will include Qualcomm modems, it may not implement all of Qualcomm's RF front end, a decision intended to make sure the phone gets out on time.

Amon added that "Priority number one of this relationship with Apple is how to launch their phone as fast as we can. That's the priority."

The report went on to state that Apple's iPhone development cycles are long enough that when the two companies agreed to bury the hatchet last April, it may already have been too late to re-invent the 5G iPhone's radio path to integrate Qualcomm's RF front end.

Apple will probably have to take some Qualcomm front-end components, because right now Qualcomm makes the only millimeter-wave antenna modules that work on Verizon and AT&T's 5G networks. 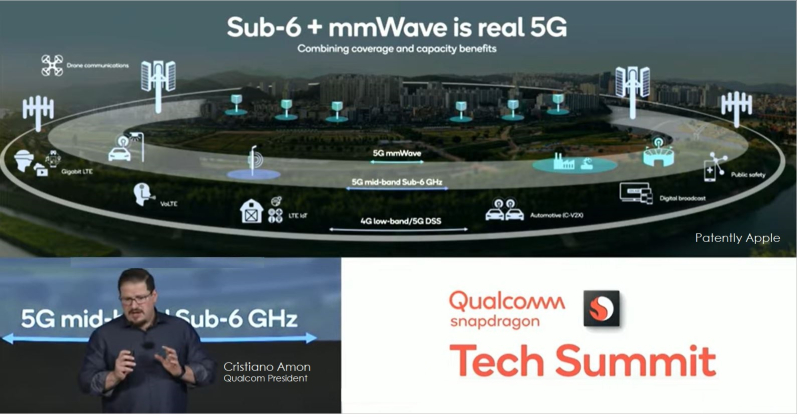 The report noted that Apple may use other elements of the radio path from other manufacturers," or from their newly acquired Intel Modem Business. For more on this, read the full PCMag.com report.

For those interested in learning more about Qualcomm's 5G technology, you can replay  Qualcomm's Snapdragon Tech Summit Sessions here: for Day One and Day Two.

It's in the Day One session where Cristiano Amon spoke but don't look for him to say anything about Apple during his keynote. Obviously his commentary on the progress with Apple was made on the sidelines of the summit or part of a special interview.

Whether Apple will bother to clarify Amon's comment on the stated missing components is unknown at this time. If Apple wants Apple fans to be confident in their first 5G iPhone, the missing components question will have to be explained.