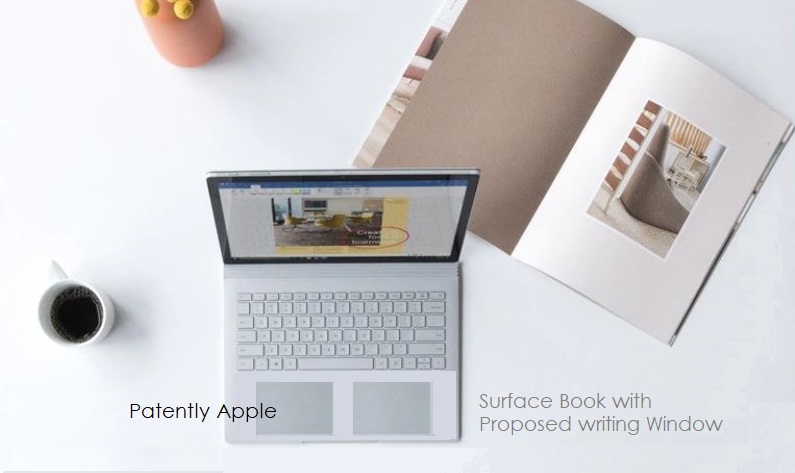 Last week the US Patent & Trademark Office published a patent application from Microsoft that relates to the addition of a new Surface Book feature that boils down to adding a new writing and/or drawing window that will sit beside the trackpad. Users will be able to take quick notes, make small edits or draw simple graphics quickly to documents shown on the main notebook's display. The invention came straight from Microsoft's Area 51 which is also referred to as the Windows Innovation Lab. This is clearly another advancement in an effort to distinguish itself from Apple's MacBook Pro in an attempt to win over more creative and/or enterprise professionals.

The new concept will add a new digitizer with a writing window beside the traditional Surface Book trackpad. While artists were always able to detach the display from the keyboard to draw, there are times when a professional simply wants to add a signature or a draw a simple arrow or circle around text perhaps in editing a document and detaching the display for minor things is too complicated. By having a small digitizer in the palm rest area of the notebook, users will be able to quickly add text, a signature or small graphic to enhance productivity.

Microsoft also notes that the main computing unit is able to invoke a note-taking application which displays the ink strokes created by the user on the main display device.

Further, Microsoft notes that "a user may interact with the writing input device in a manner similar to a physical pad of paper. This capability improves the user's note-taking experience, e.g., by not requiring the user to assume an unnatural posture while taking notes," on the main display.

Microsoft's patent FIG. 3 below is that of their Surface Book wherein the display may detach from the main body and used as a table for web surfacing or drawing if there's an artist in you. FIG. 6 shows an alternative computing device that includes a new writing or drawing surface beside the traditional trackpad. Technically the new writing surface includes a digitizer as presented in patent figure 7 further below. 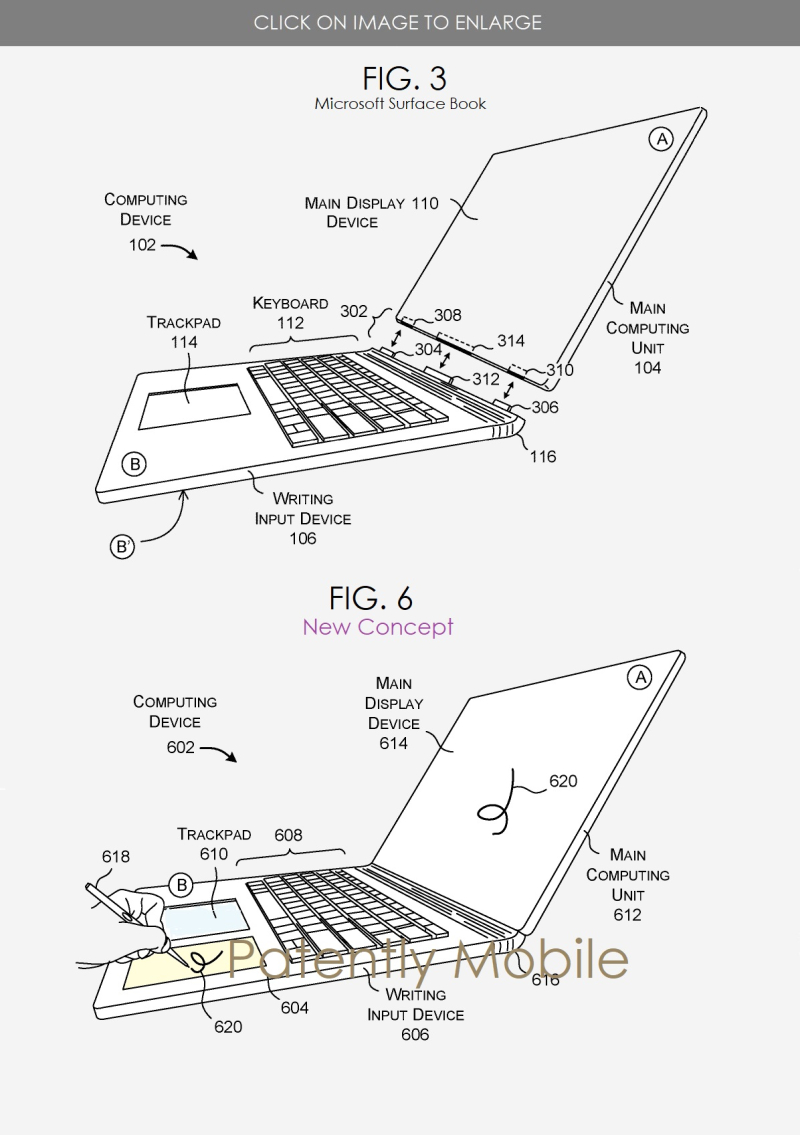 This isn't a design patent, so how it will actually appear on this version of a future Surface Book could be materially different. As a utility patent, Microsoft is simply illustrating a new addition to the keyboard area and its intended use. 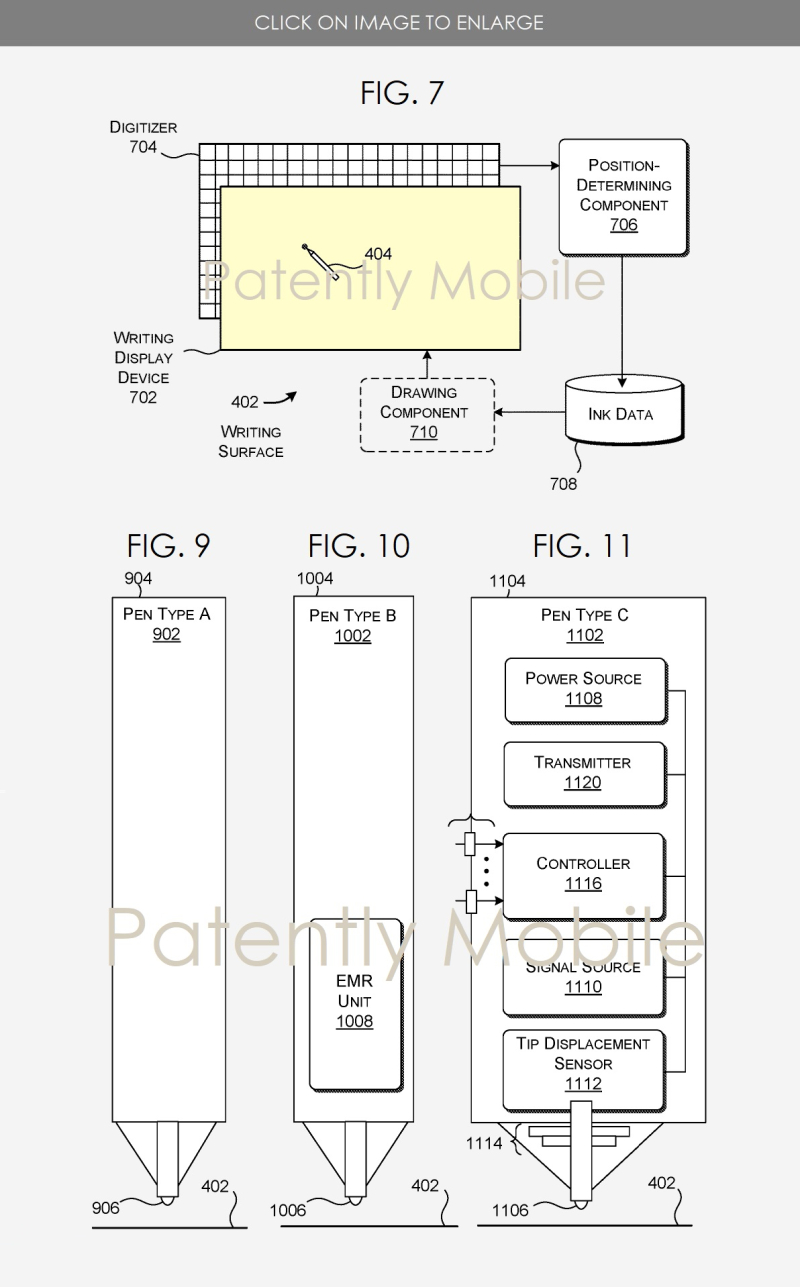 Microsoft's patent FIGS. 9-11 above shows three illustrative pens (#902, #1002 & #1102) for use in interacting with the writing surface of FIG. 7. The three pen options shown are described in the spirit of illustration, not limitation.

The patent filing notes that the digitizer detects the electromagnetic signals emitted by the signal source and determines the location of the tip based on these signals. The pen can optionally include a tip displacement sensor #1112 which detects the pressure at which the user applies the pen tip to the writing surface (e.g., by measuring the displacement of the tip which is biased by a resilient member #1114, such as a spring). The pen can also include a data store (not shown), a controller #1116, one or more input buttons #1118 (e.g., for changing the color of the pen's ink), and a transmitter #1120 for transmitting data to the writing surface 402 (e.g., using Bluetooth, etc.).

Microsoft's patent application 20190369859 that was published last Thursday was originally filed in Q2 2018. One of the inventors of this invention is Jan-Kristian Markiewicz is the Principal Program Manager, Area 51 (Windows Innovation Lab).

Considering that this is a patent application, the timing of such a device feature coming to market is unknown at this time.