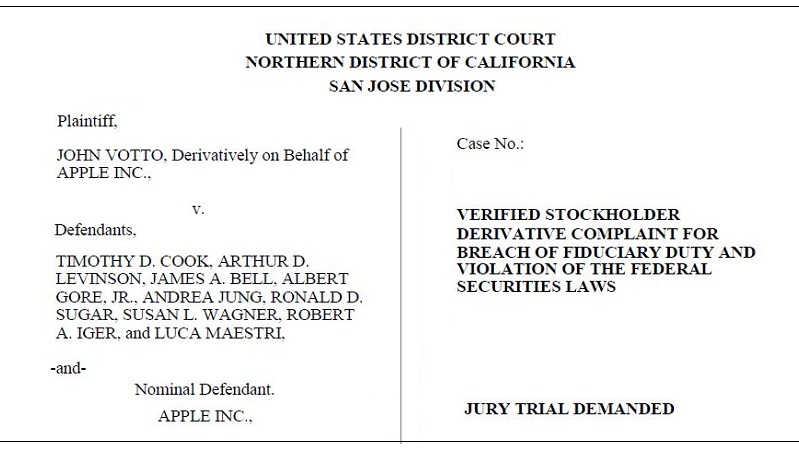 In January 2019 Patently Apple posted a report titled "Apple Issues a Gloomy Preannouncement that they'll miss their Financial Guidance for Q1 2019," which set off a series of lawsuits against Apple's CEO, CFO and Apple board members (01, 02 & 03).

Last week Apple was sued for a fourth time by John Votto who filed the lawsuit in San Jose for: "Verified Stockholder Derivative Complaint for Breach of Fiduciary Duty and Violation of the Federal Securites laws." 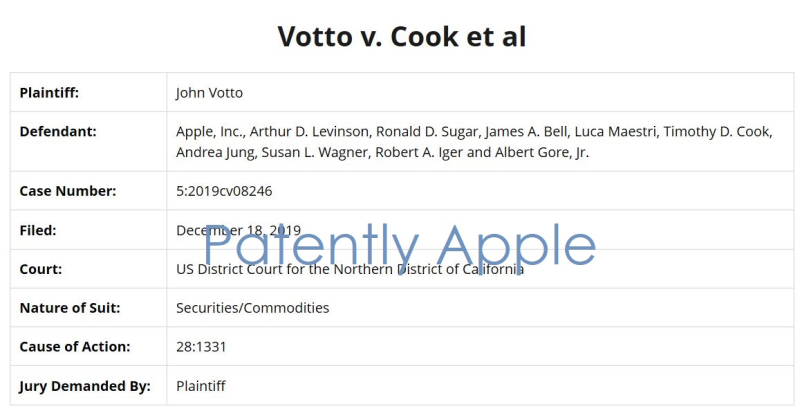 This  is  a  shareholder  derivative  action  brought  in  the  right,  and  for  the  benefit, of Apple against certain of its officers and directors seeking to remedy Defendants’ violations of state and  federal  law that  have occurred  from August  1,  2017 through January  2,  2019 (the “Relevant Period”) and have caused, and  continue  to  cause, substantial  harm  to Apple,  including  monetary losses and damages to Apple’s reputation and goodwill.

Apple is a multinational technology company that designs, develops, and sells consumer electronics and software in the U.S. and abroad. Apple’s flagship product is its iPhone, accounting for nearly two-thirds of the Company’s revenues since 2007.  Apple  sells  the  iPhone throughout  the  world,  including  in Greater China,  its third-largest  market segment behind  the Americas and Europe.

During the Relevant Period, the Defendants misrepresented and/or failed  to  disclose multiple material factors that negatively  impacted Apple’s iPhone sales and revenues,  including that, inter  alia:  (a) consumer  demand  for  new  iPhone  models  was  negatively impacted by Apple’s sales of heavily discounted  battery  replacement program for older  iPhone models, as customers chose not to upgrade or to delay same; (b) macroeconomic factors, including an escalating trade  war  with the United States, increased  competition from cheaper smartphones, and sluggish economy, were likely to negatively affect, and were doing so, Apple’s iPhone sales in China; and (c) that as a result of the foregoing, the Defendants lacked a reasonable basis when issuing positive iPhone sales and revenue guidance for the first quarter of 2019, and when publicly denying the existence and negative impact of the foregoing.

Apple’s wrongful  conduct  came  to  light  on January  2, 2019,  when the  Company disclosed declining iPhone sales and was forced to reveal to investors that it would not meet the first quarter  2019 revenue  guidance  it  had  issued  only  two  months  earlier,  the  first instance  of  Apple having  to  reduce  its  revenue  expectations  in  the  past  16  years. Apple’s Chief Executive Officer ("CEO"), Tim Cook, conceded that the declining sales were the result of users’ decisions not to upgrade  after  receiving  discount  battery  replacements,  as  well  as  economic  issues  in  China,  both issues of which Apple and the Defendants herein repeatedly denied to analysts and investors existed and/or would have a negative impact on sales.

On this news, the Company’s share price fell approximately 9%, from $157.92 on January  2,  2019  to  $142.19 on  January  3,  2019, the  first  trading  day  after  the  disclosure,  on exceedingly high trading volume of over 91 million shares.6.In addition, based on the wrongful conduct discussed herein, numerous lawsuits were filed against Apple and certain of the Defendants and regulatory and governmental investigations were started in the United States and abroad.

For more details, read John Votto's full complaint filed with the court in the full SCRIBD document below, courteous of Patently Apple.