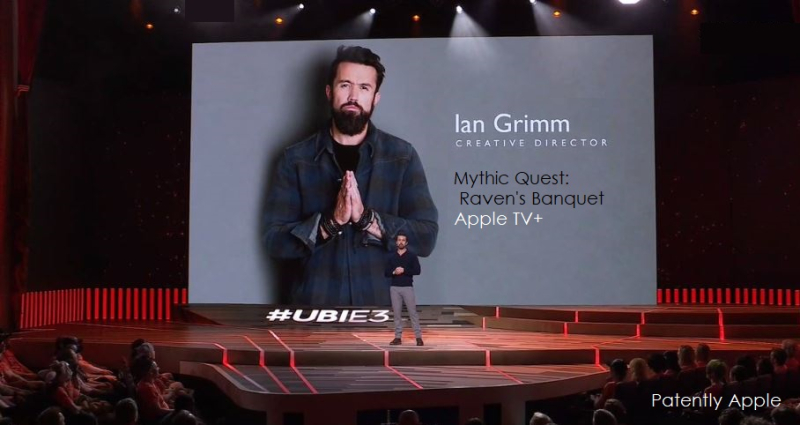 In June Patently Apple posted a report titled "Ubisoft Surprises by backing a new TV Comedy for Apple TV+ Titled "Mystic Quest: Raven's Banquet." The introduction was presented at the gaming event of the year known as E3 with the video of the event can be seen in full below. The introduction was made by the Creative Director of the series Ian Grim.

Today Apple announced that it will premiere the new comedy series on Apple TV+ on Friday February 7. Surprisingly Apple TV+ will provide its customers with the option of playing all nine episodes consecutively, instead of dragging it out week-by-week. This is one of the most popular features that Apple's competitor Netflix is famous for: binge-watching.

Whether this will be a one-time shot or the beginning of a new trend is unknown at this time. Though providing fans with the option to binge-watch a new series in one sitting would definitely be a huge plus for Apple's service.

To clarify, Apple states in their press release this afternoon that "the highly anticipated comedy series, 'Mythic Quest: Raven’s Banquet' from Rob McElhenney and Charlie Day will debut globally on Friday, February 7, exclusively on Apple TV+.  All nine, half-hour episodes of the live-action comedy will be available on Apple TV+ the day of premiere. The series is produced by Lionsgate, 3 Arts Entertainment and Ubisoft."

The "Mythic Quest: Raven’s Banquet" story line follows a team of video game developers as they navigate the challenges of running a popular video game. The video in our report provides you with a better overview of the series.