Last Saturday Patently Apple posted a report titled "The Website of the Year interviewed Apple's Head of Accessibility who explained how the company is driven to Think Holistically" when designing accessibility software and hardware.

Sarah Herrlinger, Apple’s global head of accessibility sat down with UK's website of the year the "Evening Standard" for an interview.  In the big picture, Herrlinger notes that "One of the great things about doing this kind of work at Apple is that the company controls its hardware, software and operating systems. We can infuse accessibility [features] across everything we do and do it in a really holistic way."

Apple notes at one point that a computing device like an iPhone could be further configured to select any of the elements in response to an input received by input device while the particular element is being scanned, thereby allowing a user to interact with any of the elements in the user interface using one or more inputs (e.g., button press, mouse click, tap on a touch sensitive surface, voice command, movement of a part of the users body, or the like). This is particularly useful for disabled users that are unable to operate input devices requiring motion and careful coordination, such as a keyboard, mouse, or touch sensitive display.

Apple's video below highlights what the patent described above. The use of their assistive technology called 'Switch Control' allows Ian MacKay to use his iPhone take a photo without ever having to touch the display.

The action can include scanning the contents of the selected element or performing an action associated with the selected element. The process can be used to navigate an array of application icons, a menu of options, a standard desktop or laptop operating system interface, or the like. The process can also be used to perform gestures on a touch-sensitive device or mouse and track pad gestures (e.g., flick, tap, or freehand gestures). 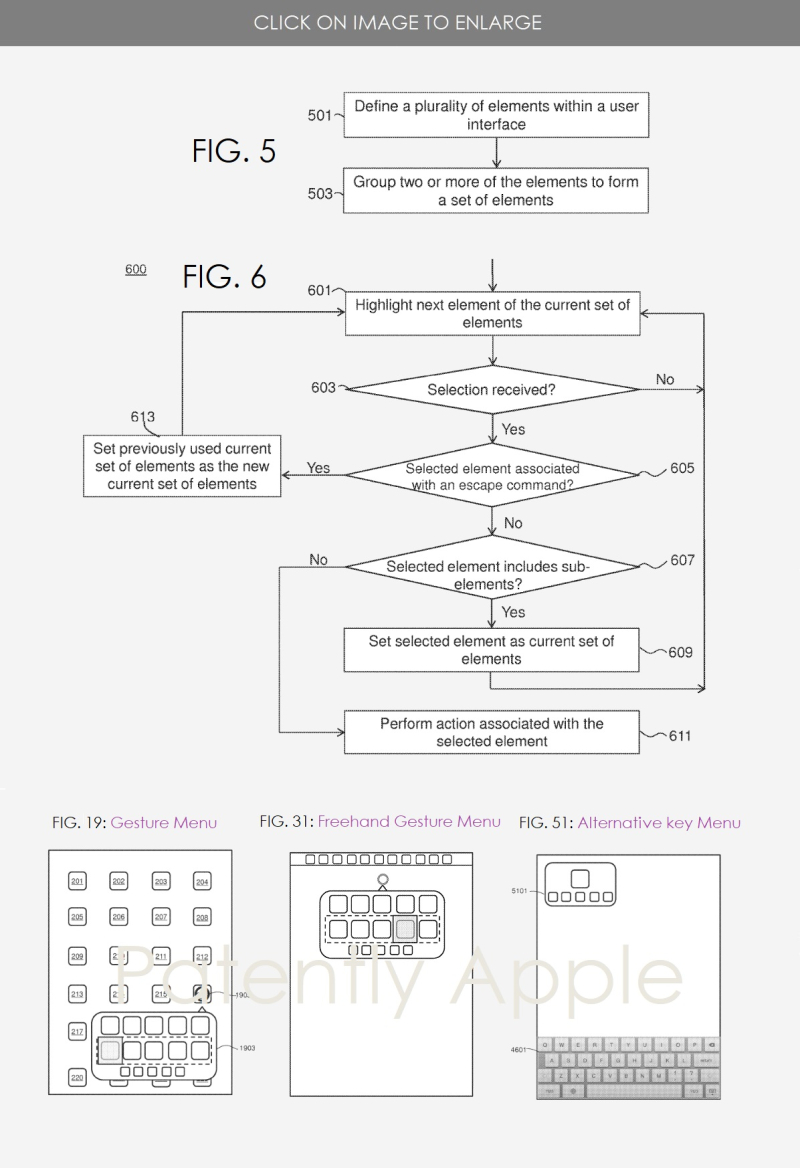 Apple's patent FIG. 19 above covers the use of process #600 of patent FIG. 6 that presents users with a gesture menu where they can select whether to use taps, flicks, pinches, pan, double tap, drag, freehand and adjust the number of fingers used to perform a gesture; FIG. 31 illustrates an exemplary interface #3100 that illustrates the operation of process #600 to perform freehand gestures from a menu; FIG. 51 illustrates an interface covering a virtual keyboard and menu for choosing alternative keys.