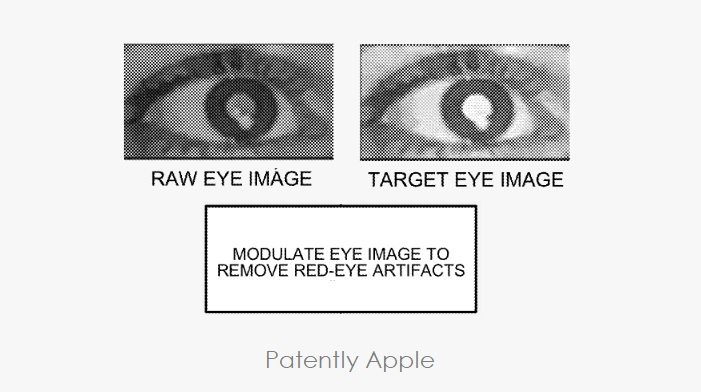 Today the US Patent & Trademark Office published a patent application from Apple that relates to advancing Apple's camera feature for removing red-eye. With the importance that cameras play in smartphones today, Apple continues to advance their cameras with new features and whenever possible advance older features as new technologies and processes permit.

Apple notes that red-eye artifacts are prevalent in consumer photography, mainly due to the miniaturization of digital cameras. Mobile devices equipped with a camera, having the flash and the lenses in high proximity to each other, often cause a direct reflection of flash light from a subject's pupils to the camera's lenses. Due to this reflected light, the pupils captured by the camera appear unnatural, assuming various colors (from dark to brighter shades of red) as a function of the capturing conditions and the subject's intrinsic traits.

Correcting for red-eye artifacts typically involves first detecting (segmenting) the eye region containing the artifacts, and, then correcting the color of the respective pixels. Segmentation of the image region that had been distorted by the red-eye artifacts is commonly done by clustering the image pixels based on color, using a color space such as YCbCr or RGB, and/or by recognizing image patterns (e.g., the pupils' size and shape) by means of annular filters, for example.

In yet another aspect, modulation may comprise detecting landmarks associated with the eye region; estimating spectral response of a glint; segmenting an image region of the eye based on the estimated spectral response of the glint and the detected landmarks, forming a glint mask; and rendering one or more glints in a region associated with the glint mask. By leveraging both a raw image (or a pseudo-raw image) and a processed image, the accuracy of detecting affected regions, rendering the natural appearance of a subject's eyes, and restoring glints can be improved. 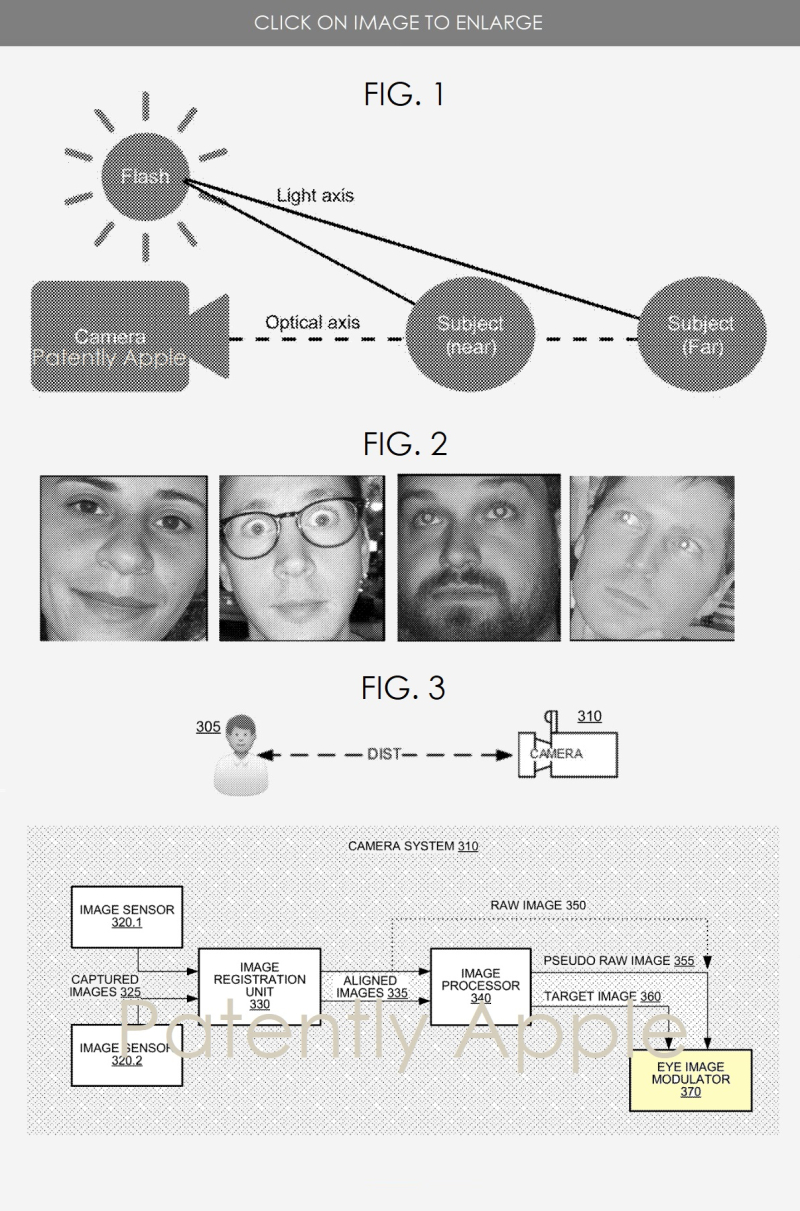 Apple's patent FIG. 3 above is a block diagram showing a camera system for red-eye artifact correction according to an aspect of the present invention; FIG. 4 below is diagram showing exemplary image processing algorithms. 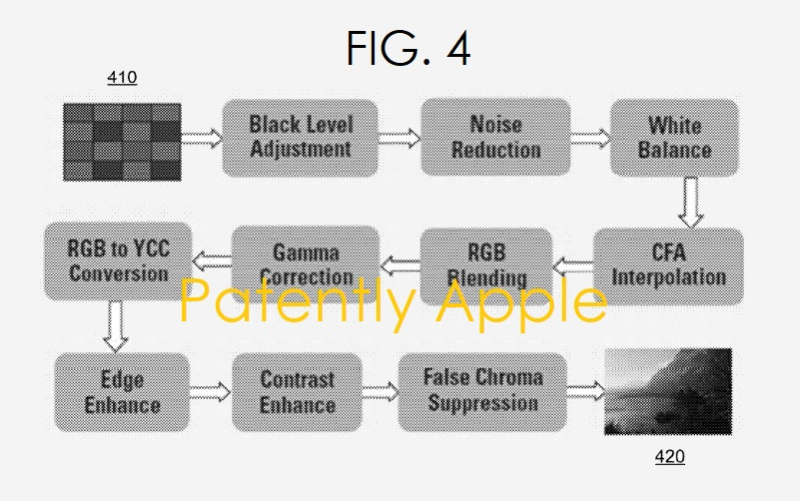 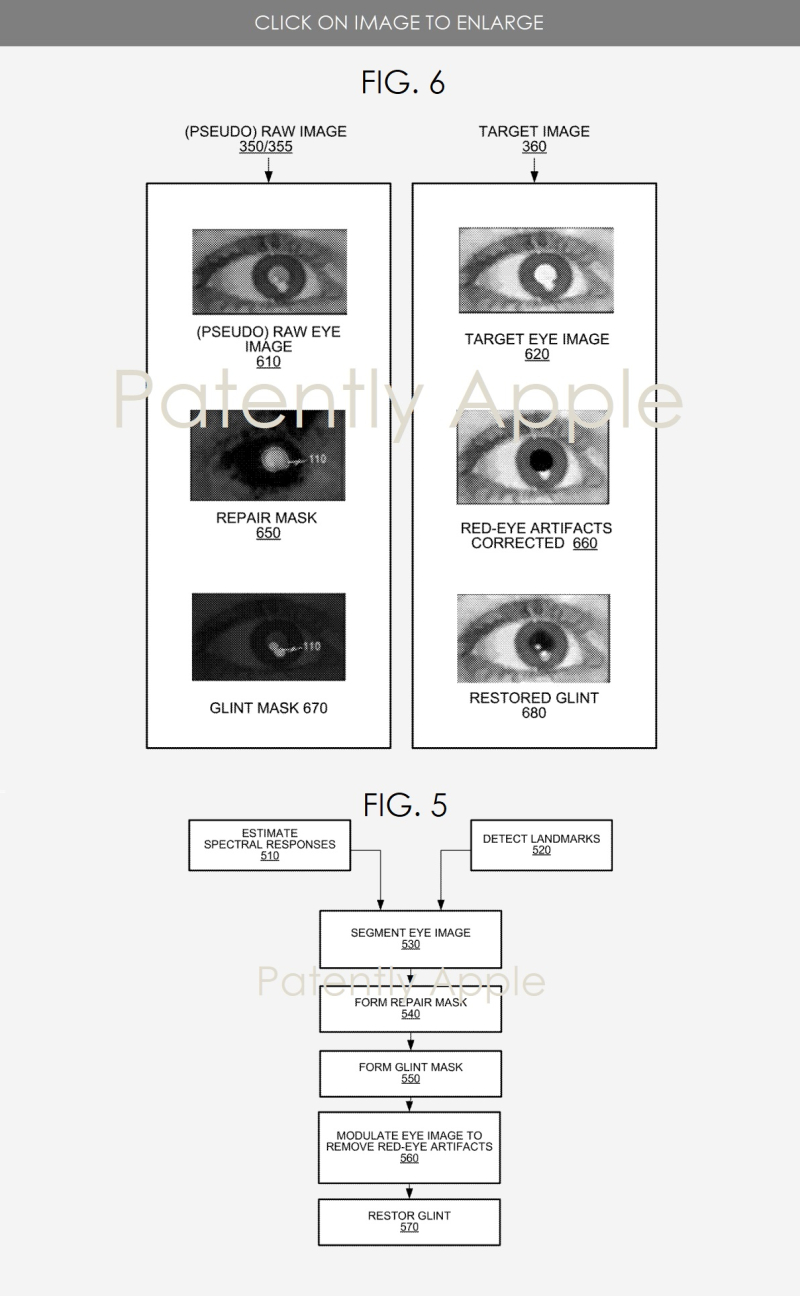 Apple's patent application 20190370942 that was published today by the U.S. Patent Office was filed back in Q2 2019 with some work dating back a year earlier.