Home Archives Contact Us Subscribe Twitter Facebook Patently Mobile
The European Smartphone Market was the hottest Global Market in Q3 2019 but not for Apple
Intel announces new Partnership with MediaTek to deliver 5G PC Notebook Chipsets for HP, Dell and others for early 2021

Last Thursday Patently Apple posted a report titled "Apple and Intel have filed an Antitrust Lawsuit against Fortress Investment Group Connected to Uniloc USA and Luxembourg." Today we present those interested in this case with more details. In the Apple-Intel opening statement of introduction, we learn about a new patent troll scheme involving a web of smaller patent trolls being bank rolled by investment firms like Fortress Investment who call the shots. It's an eye opener for those not familiar with patent trolls hurting the tech industry. Our report presents you with the full introductory statement by Intel and Apple followed by a full SCRIBD document that details everything about this case. For the record, some of the full document has been redacted by the court.

Introduction to the Lawsuit

The Full Introduction found in this lawsuit:

Rather than promote the progress of science and useful arts, patent assertion entities (“PAEs”), including Defendants that aggressively pursue meritless litigation have long been recognized to harm and deter innovation.

For example, one study estimated that patent litigation brought by PAEs in the United States resulted in expenditures of $29 billion in 2011 for licensing fees, legal fees, and other costs of responding to PAE litigation.

Another study found, by looking at the impact on stock price, that lawsuits by PAEs from 1990 through 2010 were responsible for the defendants losing half a trillion dollars. And those losses are not offset by corresponding gains to patent holders that promote innovation.

One study found that the profits received by PAEs from litigation amounted to less than 10% of the lost share value of companies targeted by the PAEs.

Based on such studies, the President’s Council of Economic Advisers, the National Economic Council, and the Office of Science & Technology Policy warned in a 2013 report that 'Patent Assertion Entities . . . focus on aggressive litigation, using such tactics as: . . . creating shell companies that make it difficult for defendants to know who is suing them; and asserting that their patents cover inventions not imagined at the time they were granted.' Further, the report concluded that PAEs 'have had a negative impact on innovation and economic growth.'

Recognition of the threat posed by improper patent assertions has led to judicial determinations clarifying the law and legislative changes with the potential to curb meritless litigation.

In 2011, the U.S. Court of Appeal for the Federal Circuit struck down the overreaching presumption offered by Defendant Uniloc USA, Inc. (“Uniloc USA”) that, as a rule of thumb, infringement of a single patent warranted twenty-five percent of the product’s profit.

The same year, Congress enacted the Leahy Smith America Invents Act, including inter partes review procedures through which the Patent Trial and Appeal Board (“PTAB”) of the U.S. Patent & Trademark Office (“USPTO”) can be asked to review whether issued patents are actually valid.

And in 2014, the Supreme Court held in Alice Corp. v. CLS Bank International, 573 U.S. 208 (2014), that inventions directed to abstract ideas could not be patented unless they contain an 'inventive concept' beyond implementation of the abstract idea in computer code.

In 2016, the Council of Economic Advisers returned to the subject of PAEs, observing that research since 2013 continues to show 'that a substantial amount of patent litigation in the United States, often with little substantive merit, often arises from certain types of NPEs [non-practicing entities] called ‘patent assertion entities.'" But the Council noted that legislative and judicial actions, such as those described above, are 'promising in that all of them should reduce the level of frivolous patent litigation.'

In the face of these challenges, PAEs have evolved. PAEs have increasingly been partnering with investment firms to fuel their litigation. This trend is part of a larger trend in the growth of third-party investment in litigation generally.

Although the precise scale of investment in litigation is unknown, estimates put it in the tens of billions of dollars. As one example, the largest litigation investor reported having investments of $2.8 billion in 2019.

Having deep-pocketed investment firms standing behind them has made PAEs only more aggressive. Indeed, to meet the expectations of their new investors for high returns, PAEs must act ever more aggressively. These new investors are content to incur loss after loss so long as they have the chance to hit a windfall reward that will justify their investment.

Patent assertion thus becomes simply a numbers game disassociated from the merits of the underlying patents, with PAEs and their investors betting that serial assertions with aggressive demands will strike a jackpot eventually making up for many other losses. Consistent with this strategy, while the overall level of patent litigation may be declining, assertions by non-practicing entities are increasing.

A central player in this emerging investment strategy is Fortress Investment Group LLC (“Fortress”). Fortress is an investment firm that went public in 2007. Fortress’s shares traded at over $35 per share after going public, but one decade later, Fortress was struggling with poor returns and its share price had plummeted to around $5 per share in 2017. Fortress was acquired that year by SoftBank Group Corp. ("SoftBank") for $3.3 billion.

Fortress contends it is “a leading, highly diversified global investment manager” and claims to have approximately $39.2 billion of assets under management as of March 31, 2019. One way in which Fortress has tried to turn around its performance and justify SoftBank’s investment in it is through increased speculation on patent assertions.

Intel and Apple bring this complaint to end a campaign of anticompetitive patent aggregation by Fortress and a web of PAEs that Fortress owns or controls.

Fortress has used its stable of PAEs to aggregate a massive portfolio of patents that purportedly read on high-tech consumer and enterprise electronic devices and components or software therein and processes used to manufacture them.  By employing a network of PAEs that it either owns or controls, Fortress has created a web of entities that obscures Fortress’s puppeteering role in this scheme.

Rather than enhancing efficiency, Fortress uses aggregation to undermine it by creating a structure in which Fortress and its PAEs benefit by asserting weak patents—i.e., those that never would have been asserted by their former owners—in order to stretch the resources of their targets and increase the possibility that those weak patents will improperly be found valid and infringed or the prospect that a target (like Intel or Apple) will agree to a license to resolve the threat posed by Fortress and its PAEs. Thus, rather than promoting the procompetitive benefits of the patent system by increasing innovation and output, Fortress’s scheme has the opposite effect.

Fortress and its PAEs acquire and seek to monetize meritless patents that never would have been asserted by their original owners, imposing a tax on the electronics industry that increases prices, decreases output, and ultimately harms consumers.

To the extent that Fortress and the other Defendants have patents that would actually be of value to potential licensees, the transfer of those patents to Fortress’s control limits access to them because those patents are now held by entities that have no incentive to license patents in a way that captures royalties that are commensurate with their actual value. Instead, those entities have incentives to obtain excessive monopoly rents by exploiting patent portfolios that aggregate any valuable patents with many meritless patents.

Through its anticompetitive aggregation scheme, Fortress has engaged in anticompetitive conduct by creating a portfolio of patents that purportedly read on electronic devices and components or software therein and processes used to manufacture them that allows it to charge far more than the value of the inventive contributions (if any) of the patents and of competitive prices for licenses.

Fortress and its PAEs seek to use that ill-gotten power to extract and extort exorbitant revenues unfairly and anticompetitively from Intel, Apple, and other suppliers of electronic devices or components or software for such devices and ultimately from consumers of those products.

Fortress’s aggregation is thus intended for an anticompetitive purpose—to invest in patents at costs lower than the holdup value of the patents to ensnare as many potential licensees as possible and to allow it and the other Defendants to assert as many possible claims of infringement to tax the commercial use of existing technology at rates beyond the actual value (if any) of the aggregated patents.

In furtherance of the anticompetitive scheme, Fortress and the other Defendants have deployed patents in waves of lawsuits against their targets without regard for the merits of the claims. Rather than licensing and litigating based on the merits of the patents, Fortress and its PAEs operate based on volume and repetition, targeting the resolve of the targets instead of establishing the merits and value of the patents.

Given the size of the portfolio, Fortress and its PAEs can deploy patent after patent in case after case against their targets with the threat of ever more patent assertions and ever more litigation. Faced with this threat, many victims have agreed to settle, rather than to challenge Fortress and its PAEs, for amounts that reflect not the merits of the underlying patents but the effectiveness of the Fortress model. Thus, Fortress and the other Defendants foreclose the possibility—which existed before aggregation—that litigation can be an economic alternative to licensing patents.

Intel and Apple bring this action to remedy the harms that they have already suffered from Defendants’ violations of federal antitrust and state unfair competition laws and to prevent further harm to themselves, the broader electronics industry, and U.S. consumers.'"

For the record: All of the highlighting with a digital yellow marker  was done by Patently Apple to emphasize points made in the court filing.

For more details, read Apple's full complaint filed with the court in the full SCRIBD document below, courtesy of Patently Apple. 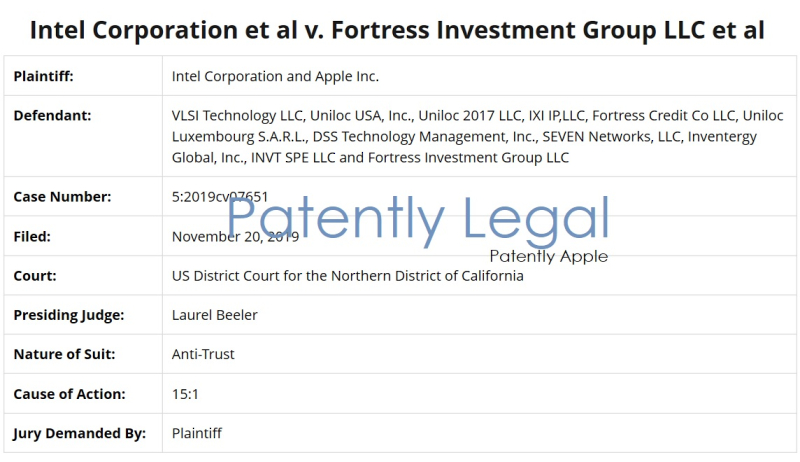