In mid-October the US Patent & Trademark Office published a patent application from Microsoft that relates to a future Surface Pro tablet that could deliver a new audio experience with single or multiple speakers, with one that could be integrated into its kickstand.

Yesterday's review of the Surface Pro X by Engadget's Cherlynn Low gave the new Surface Pro X a decent review giving the new tablet high marks for a beautiful build, speedy and reliable LTE and a comfortable keyboard case. On the downside, Cherlynn pointed to buggy software issues, crashes and limited app compatibility. The one big hit on the hardware side was squarely against the Pro X's audio being tinny and totally underwhelming.

One of Microsoft's latest inventions/patents shows us that one of their engineers from Israel has come up with a way to advance audio specifically for Microsoft's Surface tablets.

In Microsoft's patent FIG. 3 presented below we're able to see resonance box #322 which may be utilized as a speaker, subwoofer, or other acoustic resonator when paired with one or more speakers #326. Speaker 326 may be a micro speaker, such as those commonly used in mobile phones and other electronic devices. Micro speakers offer an advantage in that they are relatively thin, and thus may not add significant depth to the sides of the resonance box. 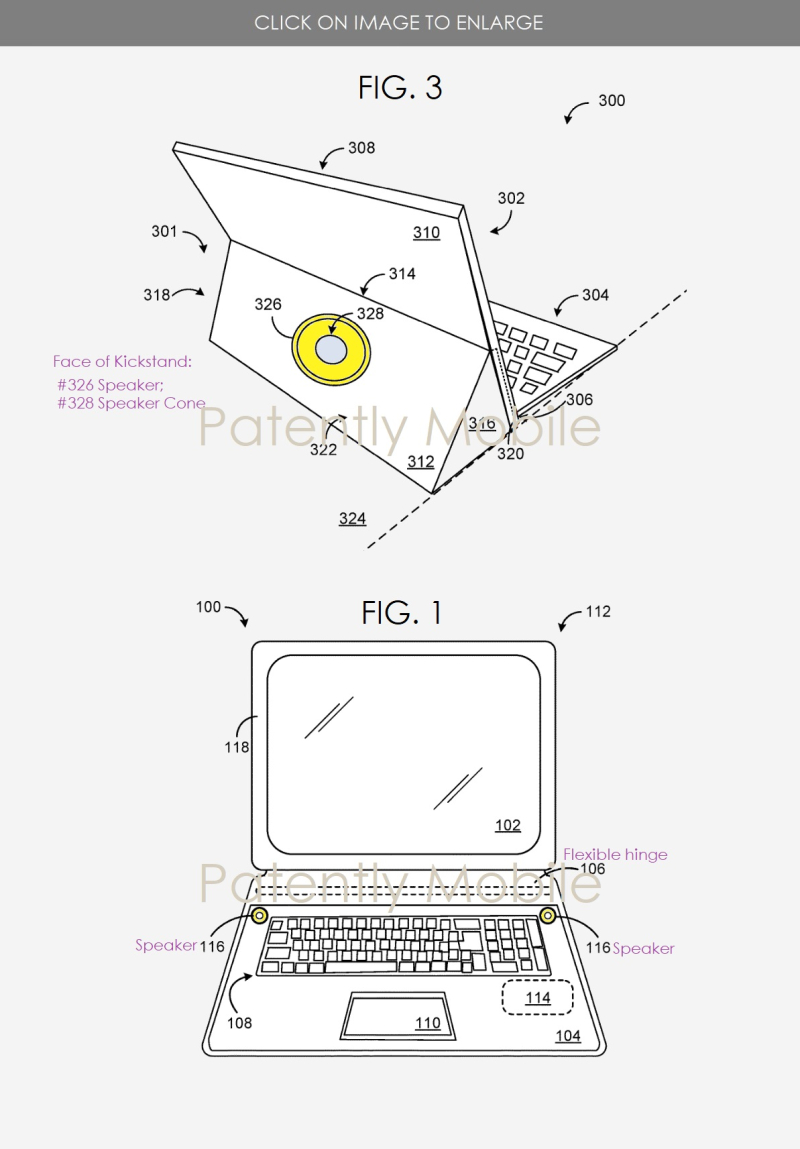 While patent FIG. 3 illustrates a single speaker, multiple speakers may be included. Although depicted herein as a traditional speaker assembly including a cone and drive magnet, other speaker types may also be used, such as piezoelectric speakers and Micro ElectroMechanical Systems (MEMS) speakers, for example.

Microsoft's patent FIG. 1 above illustrates 2 speakers at the top sides of the keyboard that will work with the larger kickstand speaker of FIG. 3.

Microsoft notes that if two or more speakers are provided, the amplifier may provide each speaker with the same signal, or may provide them with different signals (e.g., stereo).

However, a user may be provided with the option to bypass the built-in speakers, and thus both high and low frequency audio signals may be provided to the speaker(s) positioned on the resonance box.

In Microsoft's patent FIG. 4 below we're able to see the Surface Pro with an all-new "expandable enclosure" #401 found between the kickstand and the back of the Surface tablet providing a folding sidewall that is able to close off the sides of the kickstand to provide deeper audio. 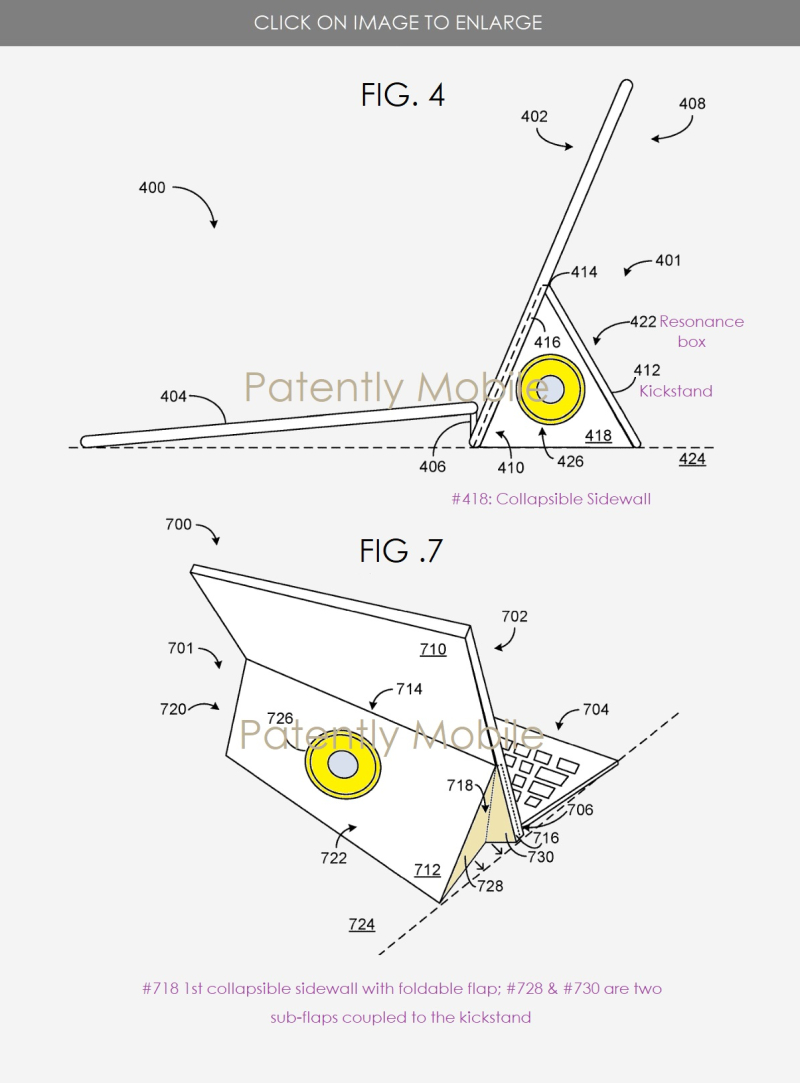 In Microsoft's patent FIG. 7 we're able to see that it differs from FIG. 3 above in that there's a collapsible sidewall versus an empty space.

Lastly, Microsoft has extended their larger speaker concept to the back of a smartphone as presented in Patent FIGS. 9 and 10 below. 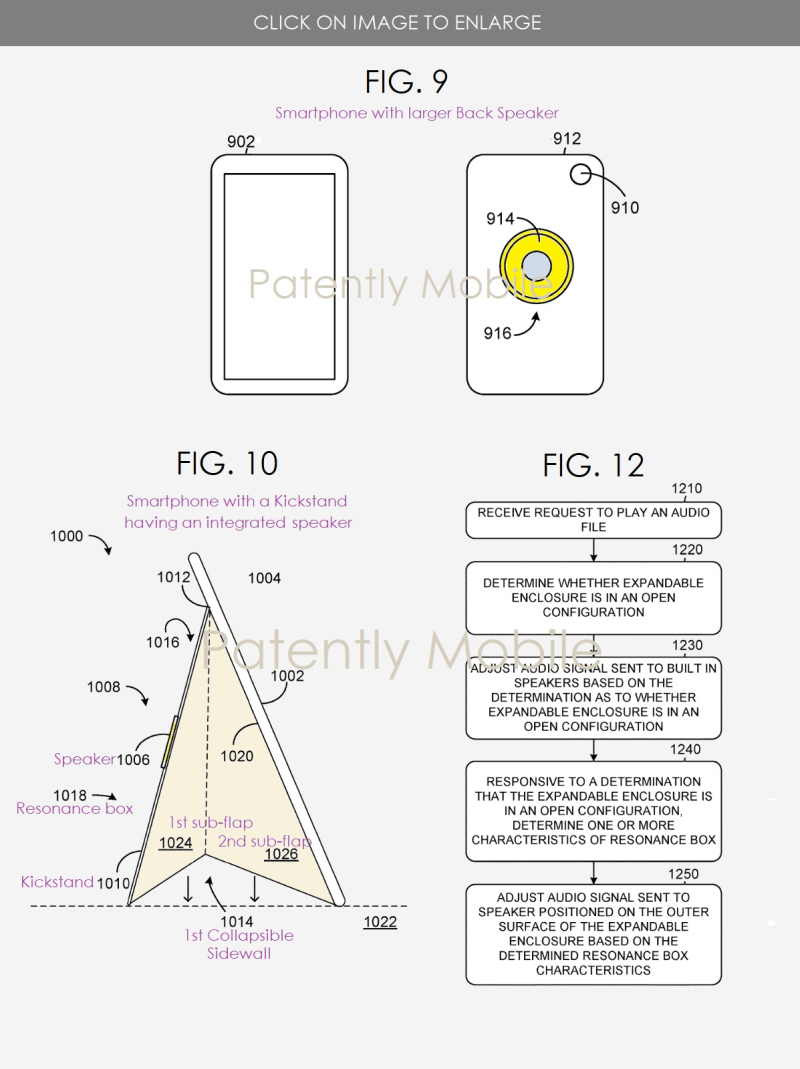 While Microsoft illustrated their 2020 Surface Duo at a Surface event in October as a folding smartphone, Microsoft may also offer a single display smartphone as well. Of course being a patent application, this may or may not pan out for 2020 though remain an option for the future should Microsoft's return to smartphones be viable.

The last Microsoft patent FIG. 12 above is a simple flowchart for an example method for adjusting audio output by an electronic device having a speaker affixed to an expandable enclosure.

Considering that Microsoft has "borrowed" some of Apple's original ideas over the years, you have to wonder if this speaker concept is one that Apple would be interested in adopting in a future version of their Smart Keyboard Folio for the iPad Pro

A writer for Cult of Mac last month expressed his unhappiness with his new iPad Pro's audio. Would adding speaker(s) in the kickstand be a solution?

In general, what do think of the concept for the iPad Pro's keyboard? Would that be something that you'd like to see in the future? Send in your comments below.