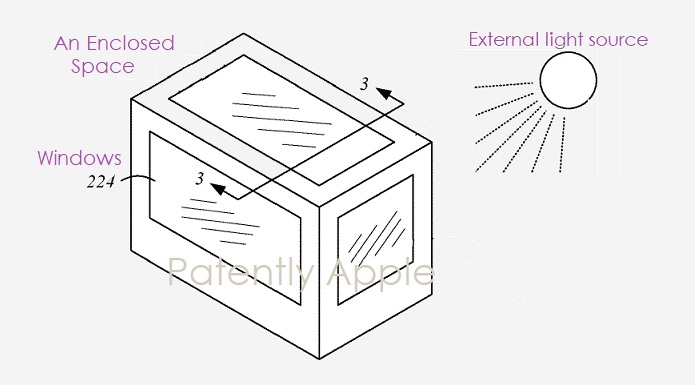 The U.S. Patent and Trademark Office officially published a series of 53 newly granted patents for Apple Inc. today. In this particular report we cover Apple's patent relating to adjustable lighting system. The system could be used in conjunction with a specialized room for video conferencing, a space within a transportation system and more.

It's an oddball patent that was in-part invented by two specialists that work with Apple's "Special Projects Group," that works on things like Project Titan and Apple's future headset(s).

Apple granted patent is an oddball that's difficult to get your head around as to exactly what it is. Apple claims that their invention relates to an adjustable lighting system which is controlled to achieve a configuration for an internal light condition.

The adjustable lighting system is operable to regulate the lighting conditions in an area, such as an enclosed space such as a room or a compartment in a transportation system.

On the surface this is an oddball patent for Apple when you see the first two patent figures 2 and 4 below.

Apple's patent FIG. 2 below is a perspective view illustration showing an enclosure; FIG. 4 is a cross-section view illustration taken along line 3-3 of FIG. 2 showing the enclosure and a second example of an adjustable lighting system. The first video conference endpoint is located within an enclosure (not shown in FIG. 16) of the adjustable lighting system which may be similar to the enclosure 220 of FIG. 2.

Beyond a video conferencing room, Apple's description for what the room with adjustable lighting could be used for is just too ordinary to give us a clear picture of the invention.

Apple states that "An occupant (#432 of FIG. 4 above) is located in the interior space (#430) of the enclosure (#420), and is engaged in an activity. Examples of activities include eating, sleeping, reading, watching television, and using computing devices and other electronic devices.

The occupant is located within a field-of-view of the camera #408. The camera captures an image or a series of images (e.g., a movie) depicting objects and persons that are located in the interior space (#430) of the enclosure.

Beyond a video conferencing room, the patent verbiage is just too vague to figure out what they're describing. Being that Apple's patent application does point to the room being associated with a "transportation system," it could be reinventing a "Truck Sleeper" or a space within a future autonomous vehicle. Unfortunately Apple refuses to provide us with a broader understanding of the space/room/compartment/interior space the lighting system is for.

To dive further into oddball granted patent 10,477,659 click here. Apple's granted patent was originally filed in Q3 2017 and published today by the US Patent and Trademark Office.