Apple and Intel on Wednesday filed an antitrust lawsuit against SoftBank-owned Fortress Investment Group, alleging the firm stockpiled patents to hold up technology companies with lawsuits demanding as much as $5.1 billion from Apple.

CNBC reports that "The suit follows an earlier case filed by Intel against Fortress in October. Intel withdrew that suit and on Wednesday filed a new version in the U.S. District Court for the Northern District of California with Apple also joining as a plaintiff. 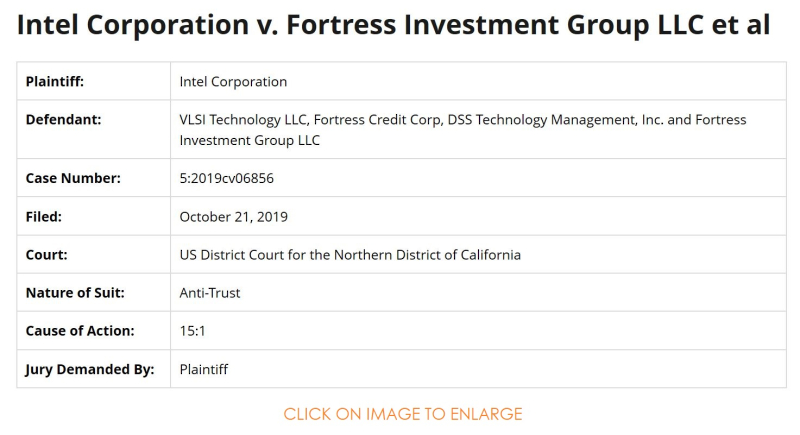 In the filing on Wednesday, Apple said that a group of firms connected to Fortress had filed at least 25 lawsuits against the iPhone maker, asking for between $2.6 billion and $5.1 billion in damages from the iPhone maker. One of the suits, Apple wrote in its filing, alleged that Apple violated a step-counting patent in its devices with health-tracking apps.

Two Fortress-connected firms, Uniloc USA and Uniloc Luxembourg, 'have disclosed that they believe they are entitled to damages of between $1.41 and $2.75 per Apple product, for total damages in the range of $375 to $732 million,' Apple wrote in its complaint.

'The apparent precision of the per-unit damages request is a facade; Uniloc USA and Uniloc Luxembourg simply adopted the amounts that Apple sought from Samsung in litigation for Apple’s patents.'"

Intel said it could not comment beyond the court filing, and Apple did not immediately respond to a request for comment.

In 2018 alone Uniloc had filed more than 180 patent infringement lawsuits against a wide array of technology companies.

The new Apple-Intel lawsuit is not a surprise in the least.