Home Archives Contact Us Subscribe Twitter Facebook Patently Mobile
At the last moment, Apple Surprisingly Cancelled the AFI Festival Premiere of ‘The Banker’ over Undisclosed ‘Concerns’
LG U+, in Collaboration with Nreal, is preparing to launch Augmented Reality Glasses in Early 2020 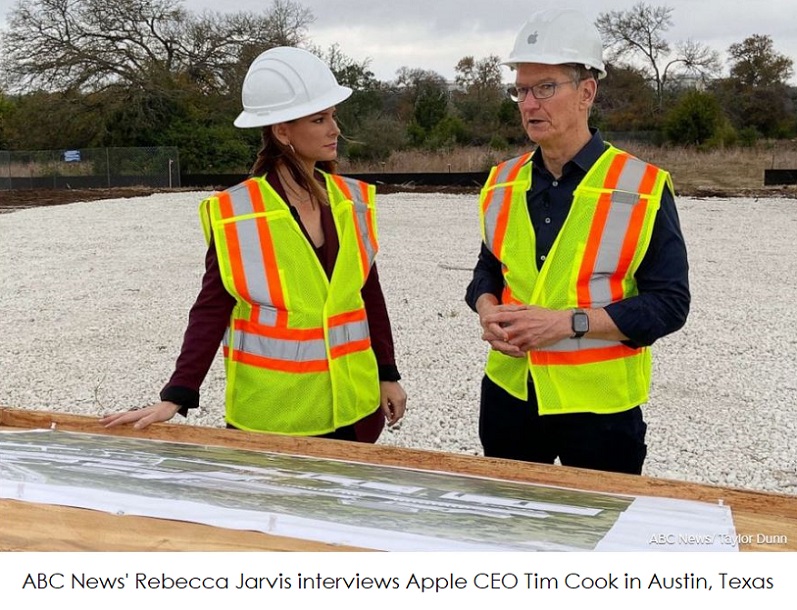 As Apple broke ground at its newest facility, in Austin Texas, CEO Tim Cook said that the company was proud to make its "most powerful computer ever" in the U.S., and opened up about having the president's ear and navigating business in China amid political tripwires and an ongoing trade war.

"We are really proud to make the Mac Pro here -- this computer is our most powerful computer we've ever made, by far," Cook said in an exclusive interview with ABC News' Rebecca Jarvis on Wednesday. "It performs over 50 trillion tasks per second. I mean, this is just mind-blowing."

While it was widely reported last week that Apple hired a Republican as part of their lobbying team, Cook told  Jarvis that he didn't believe in lobbyists but rather direct conversation. Adding that "I strongly believe in engagement. I hate polarization. I despise it."

The ABC News interview goes on to cover a lot of territory including DACA, the situation in Hong Kong, what Apple looks for in a candidate when hiring and much more. There's also a 3 minute video interview which you can check out here.