In Spotify's Q3 financial results reported today they note: "We continue to feel very good about our competitive position in the market. Relative to Apple, the publicly available data shows that we are adding roughly twice as many subscribers per month as they are. Additionally, we believe that our monthly engagement is roughly 2x as high and our churn is at half the rate. Elsewhere, our estimates imply that we continue to add more users on an absolute basis than Amazon. Our data also suggests that Amazon’s user base skews significantly more to ‘Ad-Supported’ than ‘Premium’, and that average engagement on our platform is approximately 3x.

The company finished Q3 with 113 million Premium Subscribers globally, up 31% Year over Year. Net Subscriber growth exceeded our expectations and was led by strong performance in both Family Plan and Student Plan. All other product offerings were mostly in line with expectations.

Overall, Total Monthly Active Users (MAUs) grew 30% Year over Year to 248 million, outperforming the high end of their guidance. Developing regions continue to be a significant driver of this outperformance. Growth in Latin America accelerated sequentially for the 2nd consecutive quarter as retention among newer users continues to improve.

Southeast Asia remains our fastest growing region (excluding India), and Y/Y growth in Q3 accelerated 1400 bps vs. 3Q18. Of note, India outperformed our forecast by 30% this quarter. This momentum was driven by a number of factors including the launch of our first broad-based marketing campaign, “Sunte Ja” (“Listen On”), since launch in February.

The company was positive about their new podcast service as well: "We continue to see exponential growth in podcast hours streamed (up approximately 39% Q/Q) and early indications that podcast engagement is driving a virtuous cycle of increased overall engagement and significantly increased conversion of free to paid users."

In late June a French publication numerama reported: "It was at the Apple Store on the Champs-Elysees that Eddy Cue, Senior Vice President in charge of Services, was waiting for us to talk about the future of Apple Music. In one of the company's new meeting rooms in France, the one who works directly with Tim Cook did not hide his pride: in just 4 years, Apple's music streaming service has attracted more than 60 million subscribers." A Statista report presented a statistical chart published in early July supporting the subscription number. 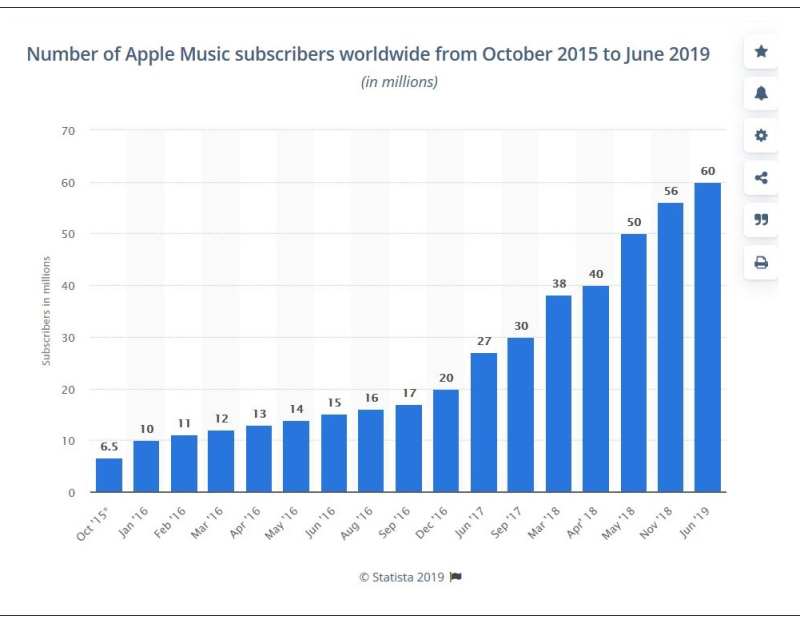 Apple reports their fiscal Q4 2019 financials on Wednesday, October 30. Apple may or may not break out Apple Music subscribers at that time but are sure to get the news out one way or another over the next month.