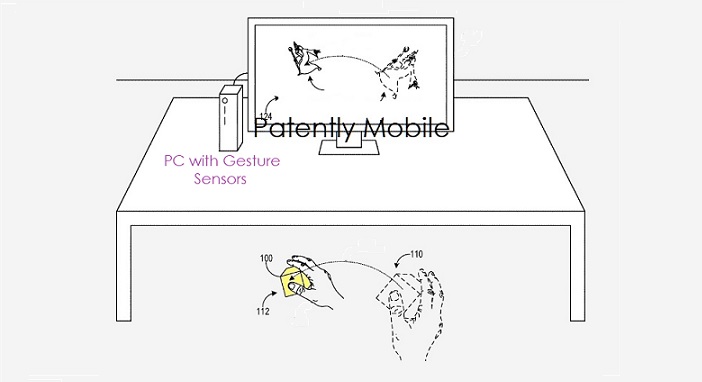 Microsoft's hardware division has grown slowly beginning with their Surface Tablet line-up with a keyboard-protective case. They moved on with their inventive Surface Book with a detachable display that acts as a standalone tablet. They've since delivered a series of new notebooks and even introduced noise cancellation over-the-ear headphones. Then came the big shocker earlier this month when Microsoft provided introduced Surface Neo, the foldable tablet, and Surface Duo, their foldable smartphone that will be coming to market in Q4 2020.

The leap to foldable devices ahead of Apple showed that they wanted to get out in front and lead the market, not just follow it. It showed that this wasn't some kind of experiment with Microsoft that would eventually die. Microsoft is doing the research and are now willing to assist their ecosystem partners like HP, Dell, Asus, Lenovo and others break into new categories first and ahead of Apple. It's a new day.

In a recent interview with Marques Brownlee, Microsoft's CEO Satya Nadella quoted the famed Alan Kay who worked at HP and later joined the Xerox PARC research staff in Palo Alto, California. Throughout the decade, Alan had developed prototypes of networked workstations using the programming language Smalltalk. Those inventions were later commercialized by Apple in their Lisa and Macintosh computers.

Satya stated: "I love that Alan Kay quote that says "If you're serious about your software you will take your hardware seriously." This is something that Microsoft never really committed to until Satya became CEO.

Satya added that "For us, really going that extra mile, all the way to ensuring from the silicon to the cloud things are coming together around the experience has been a very important thing for us." The video below is cued up to start just as Satya makes the quotes we've mentioned.

Beyond foldable devices, Microsoft showed us at their special event that they're trying to follow Apple's footsteps by finally entering the silicon engineering game with partners like AMD and Qualcomm so as to give their future mobile devices a slightly different experience than other Android devices.

In that vein of wanting to get ahead of the competition, earlier this month the US Patent & Trademark Office published a patent application from Microsoft that reveals that they've invented what could be a next-gen input device for PC's that goes far beyond the two-dimensions of a mouse to that of an input device capable of delivering six degrees of freedom (6DOF).

Microsoft begins their patent by discussing what's available what could be. They note that input devices may facilitate different types of user interaction with a computing device. As examples, two-dimensional translation of a computer mouse across a surface may cause two-dimensional translation of a cursor on a display, while a handheld controller equipped with an inertial measurement unit may provide three-dimensional input as the controller is manipulated throughout space.

These and other existing input devices may present a variety of issues. First, a typical input device has a form factor that lends itself to being held or otherwise manipulated in particular ways.

Other ways of manipulating the input device may be cumbersome or awkward, and when considered with the constrained nature of human wrist and arm movement, this can limit use of the input device.

Second, typical input devices do not support easy/effective transitions among different paradigms of user interaction. This can hinder or prevent multi-modal interaction, further limiting the usefulness of the input device.

As one example of multi-modal interaction, a user may want to animate a graphical object in three dimensions--itself often a challenging task due to the limitations of existing input devices and the two-dimensional nature of graphical output representing the object and its animation--as well as the ability to supply two-dimensional input to a graphical user interface.

Input devices revealed may be conducive to manipulation with a greater variety of orientations and motions, supporting natural and expressive movement throughout space, to better enable various paradigms of user interaction.

Microsoft's patent Figures 1A-1D below illustrate various example modes of user interaction carried out between an input device and a computing device. 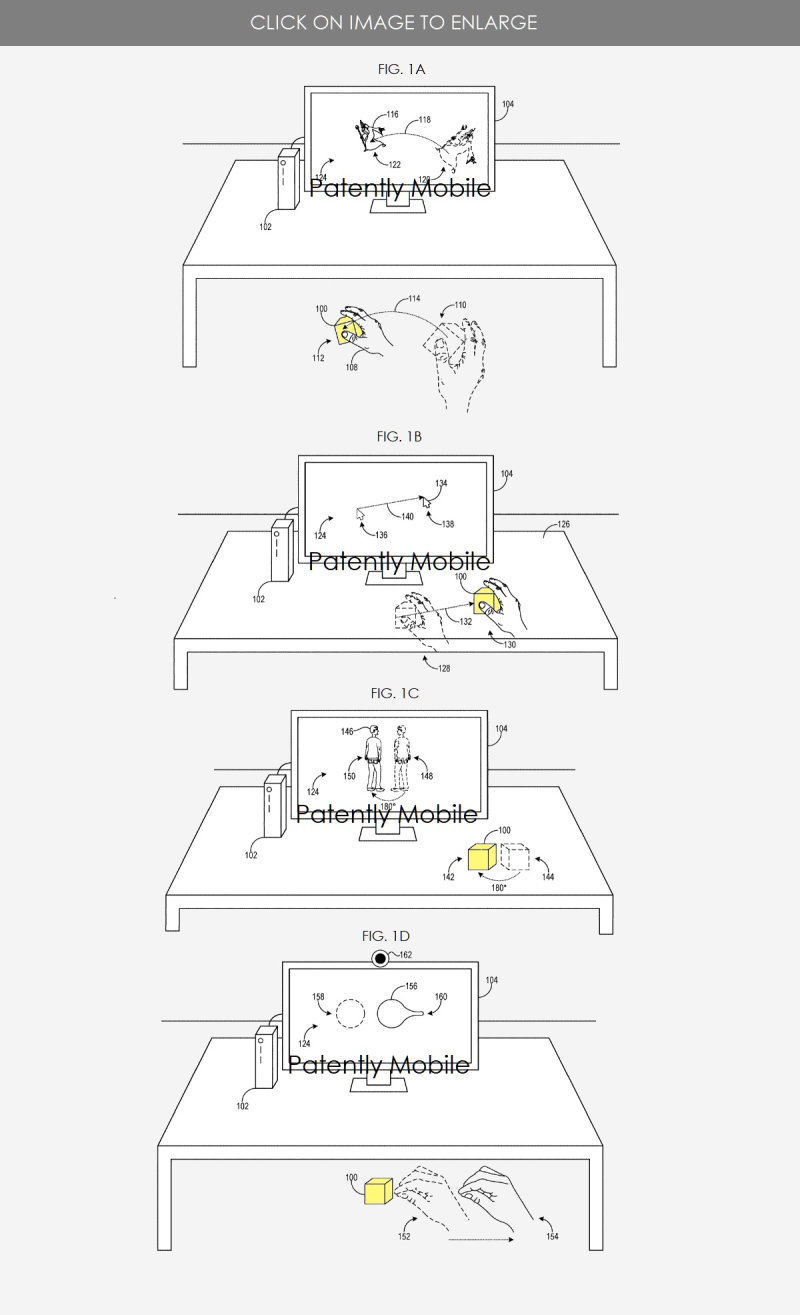 The sensor system may assume any suitable form, such as that of an inertial measurement unit (IMU), and may include one or more of an accelerometer, gyroscope, and magnetometer. As another example, sensor system may perform six DOF sensing based on alternating current electromagnetic sensing technology. 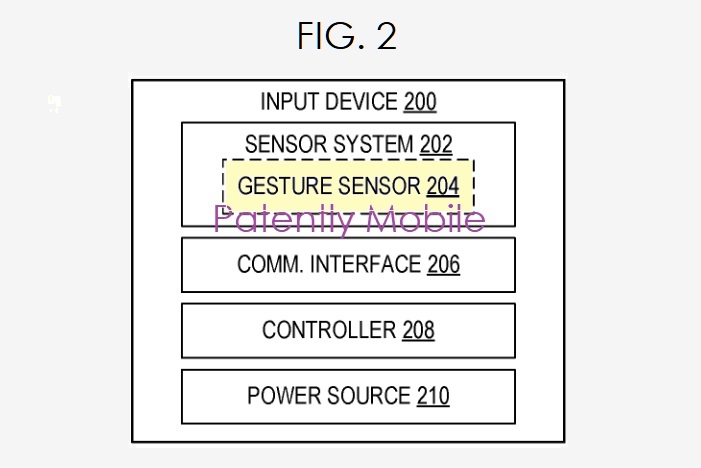 To this end, FIG. 1D depicts an example in which hand #108 performs a pinching hand gesture in relation to input device 100 (which may be held with another hand not shown in FIG. 1D).

The hand gesture is started at an initial location #152 proximate to the surface of input device #100. While retaining the pinched posture, the user's hand moves in the positive y direction to a final location #154 away from the input device. A virtual object #156 rendered on the display (#104) is controlled in response to this pinching hand gesture.

To this end, Microsoft's patent FIG. 1D shows an image sensor (#162) coupled to computing device (Desktop #102) and configured to detect gestural input applied to the input device. The Image sensor may assume any suitable form, such as that of a depth camera (e.g., time-of-flight, structured light, stereo camera system).

Microsoft's patent Figure 3 below shows an example input device in the form of a stylus that could use six degrees of freedom (6DOF). 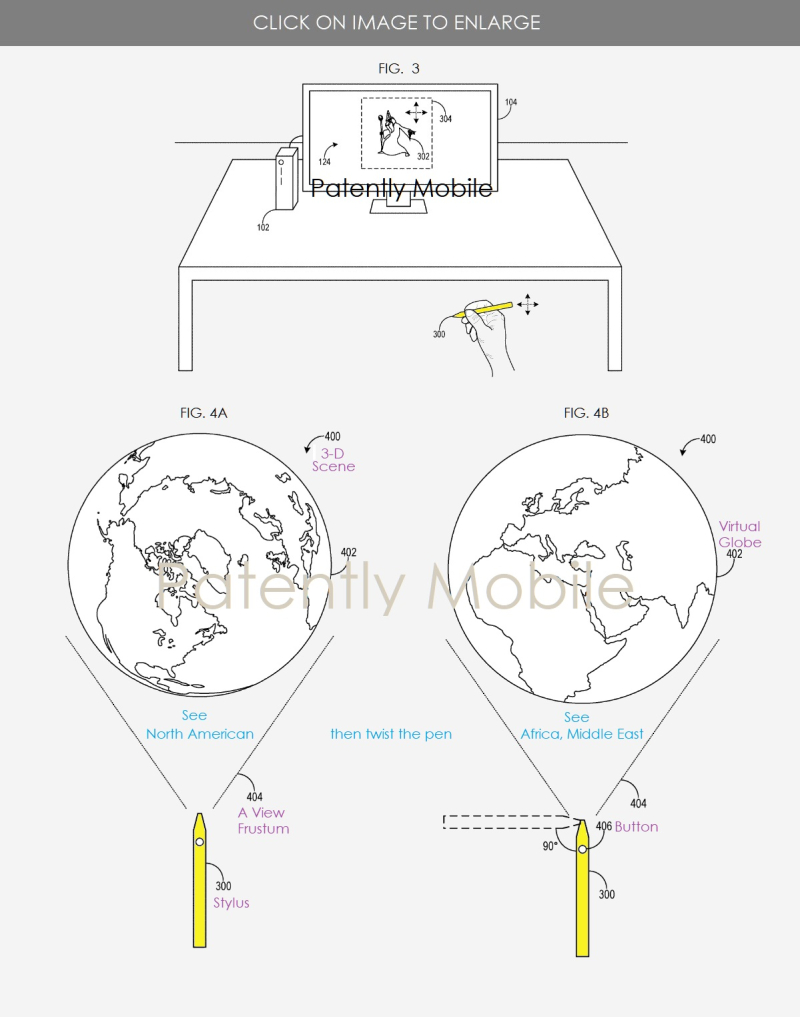 Microsoft's patent Figures 4A and 4B illustrate the control of a virtual camera in a three-dimensional scene by the stylus of FIG. 3.

In Microsoft's patent FIG. 4A above, the globe #402 is viewed from a first perspective that is selected according to the three-dimensional orientation of the stylus #300.

To illustrate this variance, Microsoft's patent FIG. 4B shows the globe viewed from a second perspective resulting from the rotation of the stylus and view frustum by 90 degrees about a vertical axis (e.g., extending into the page of FIG. 4B).

A different portion of globe 402 can then be perceived from the second perspective relative to the first perspective. While not illustrated in FIGS. 4A-4B, three-dimensional scene #400 may also support the variation of the perspective of the globe in response to translation of the stylus to thereby enable zoom into/out of the globe.

The camera control enabled by the stylus may utilize any suitable combination of user inputs. In one mode of control, the perspective of the globe may change in real-time as the orientation of the stylus changes.

The user input may include a single or double tap of a button #406 provided on the stylus for example.

Microsoft patent FIG. 5 below shows another example input device configured for use with the input device of FIGS. 1A-1D. Input device #500 may provide input detectable by a touch/hover sensor. 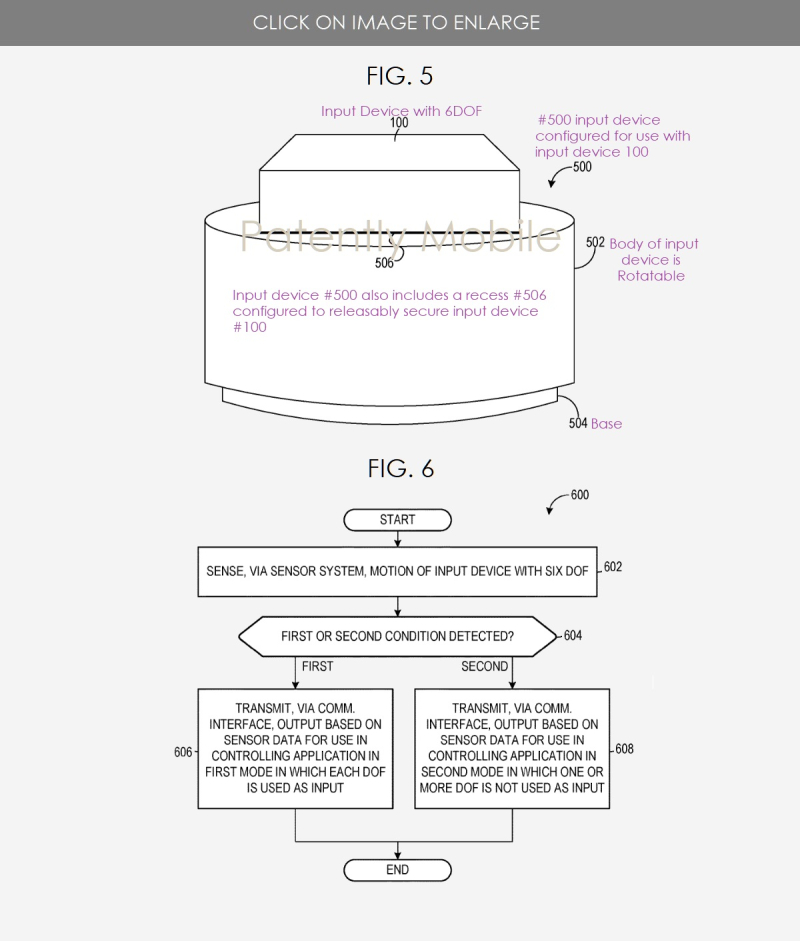 Microsoft's patent application that was published earlier this month was originally filed in Q1 2018.

Lastly, Apple had folding devices on record for years and yet it appears that Microsoft and partners will beat Apple to market. Could the tide be turning?