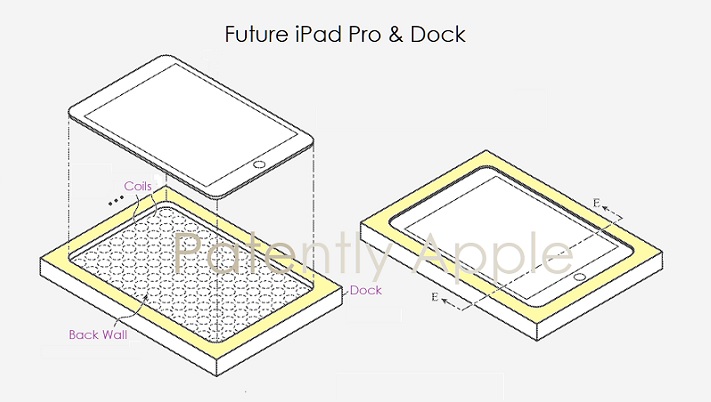 The U.S. Patent and Trademark Office officially published a series of 64 newly granted patents for Apple Inc. today. In this particular report we cover Apple's surprising revelations of a new Apple Pencil that closer to a pen with a rolling-ball point tip. The new Pen uses an advanced magnetics system that could provide higher-end haptics. Apple also illustrates a new iPad Pro dock which can also be a next-gen smart cover, smart folio and so forth. Overall, it was a surprise to see this granted patent not having a history of being a public patent application.

Generally, Apple's invention relates to an interface system in which force and/or motion outputs are provided to a user through a stylus or Apple Pencil.

An Apple Pencil may be used to provide inputs to devices with touch-sensitive input surfaces, such as drawing tablets, tablet computers with touchscreens, and the like. However, being primarily input devices, many styluses do not provide any force or haptic outputs to the user.

Accordingly, systems are described in Apple's granted patent in which a future Apple Pencil will be able to produce force and/or motion-based outputs, such as forces (e.g., directional forces), vibrations, oscillations, or the like.

Such outputs may provide users with useful feedback or information relating to the input being provided by Apple Pencil. For example, force and/or motion-based outputs may indicate when a stylus is deviating from an intended or predicted path (e.g., while drawing or writing), or they may be used to help differentiate or delimit different regions of an input surface (e.g., to indicate the location or boundary of an icon or other affordance).

These and other uses may also improve device accessibility for visually or hearing impaired users.

Apple's patent FIG. 1B below shows the interface system #100 in an active state, with the input device (e.g., Apple Pencil #104), and in particular a magnetic component #112 of Apple Pencil being subjected to a magnetic field  #110. 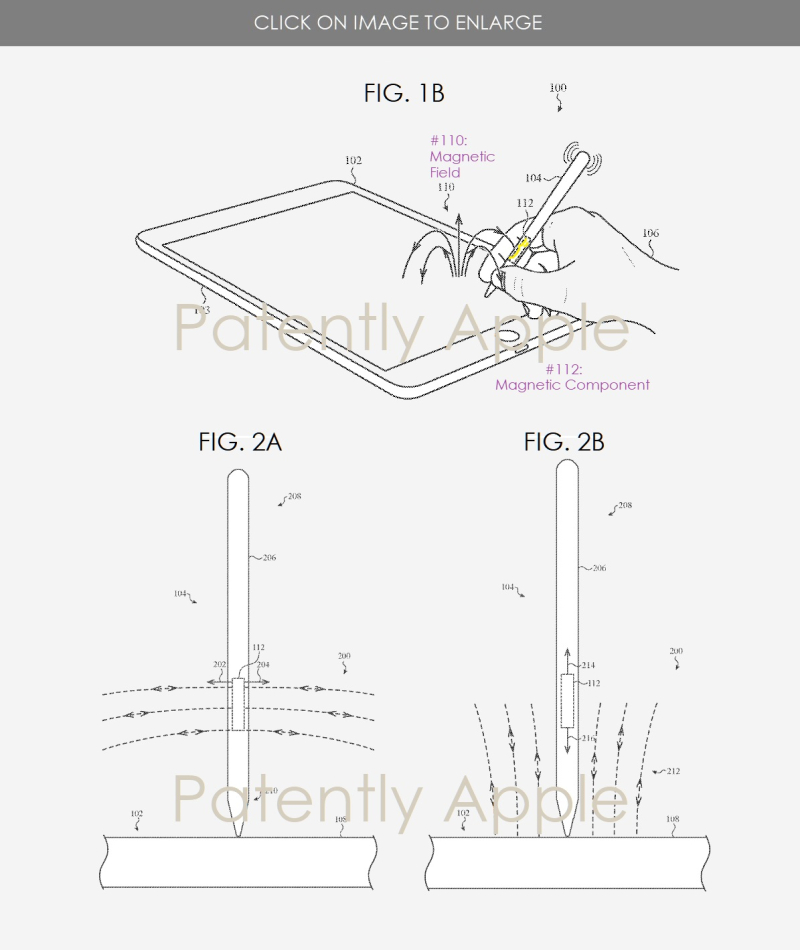 Apple's patent FIGS. 2A and 2B above illustrate how magnetic fields works with Apple Pencil to create forces that will produce vibrating haptic outputs.

Apple's patent FIGS. 4A and 4B below present examples of a future iPad Pro having built-in mini conductive coils under the display. In some cases, all or some of the coils may overlap other coils. By reducing the size of each coil #400 and including more coils, greater control may be exerted over the forces imparted to the magnetic components of the Apple Pencil. 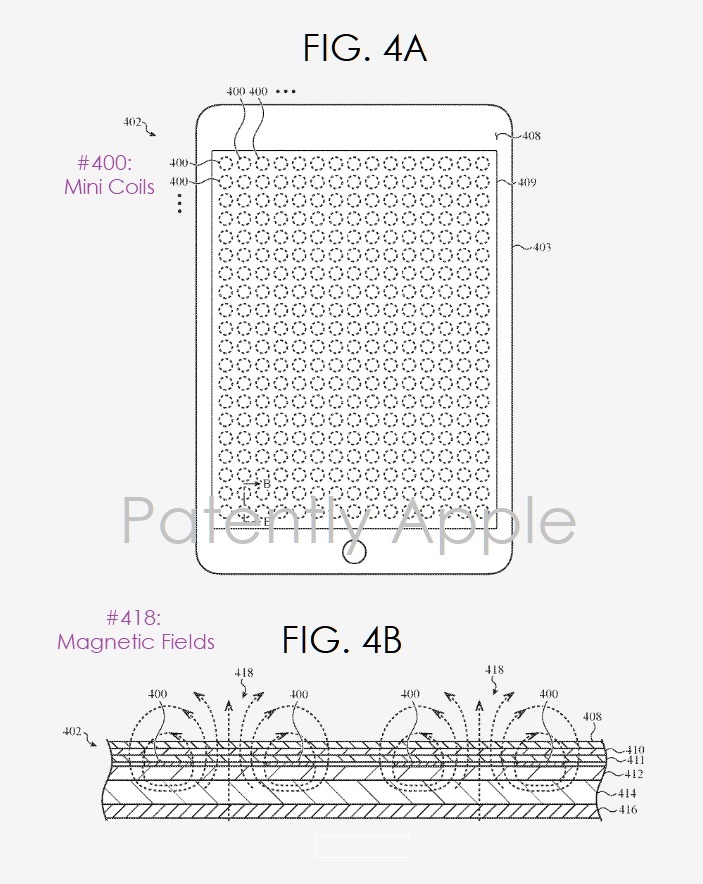 By selectively activating multiple coils, different magnetic field configurations may be produced. Moreover, forces that tend to move or guide the stylus (e.g., forces parallel to the display cover, such as those in FIG. 2A (#208) may be more accurately produced than with larger or more sparsely placed coils.

Apple's patent FIGS. 8A-8C reveals an iPad Pro that is designed to work with a new Dock. Apple notes that "The dock #810 may include an array of coils #812 embedded in or otherwise incorporated in a back wall # 814 of the dock. 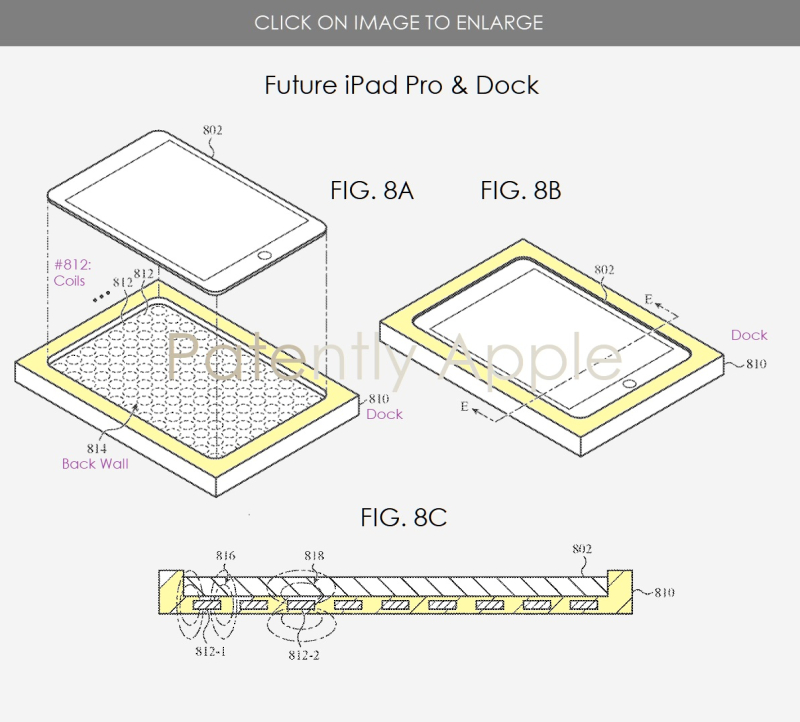 The iPad Pro will include a communication port #1428 (further below) that is configured to transmit and/or receive signals or electrical communication from an external or separate device.

In the graphics below you'll find Apple Pencil with more conductive components and more importantly in patent FIG. 12, a new rolling-ball point tip/mechanism. 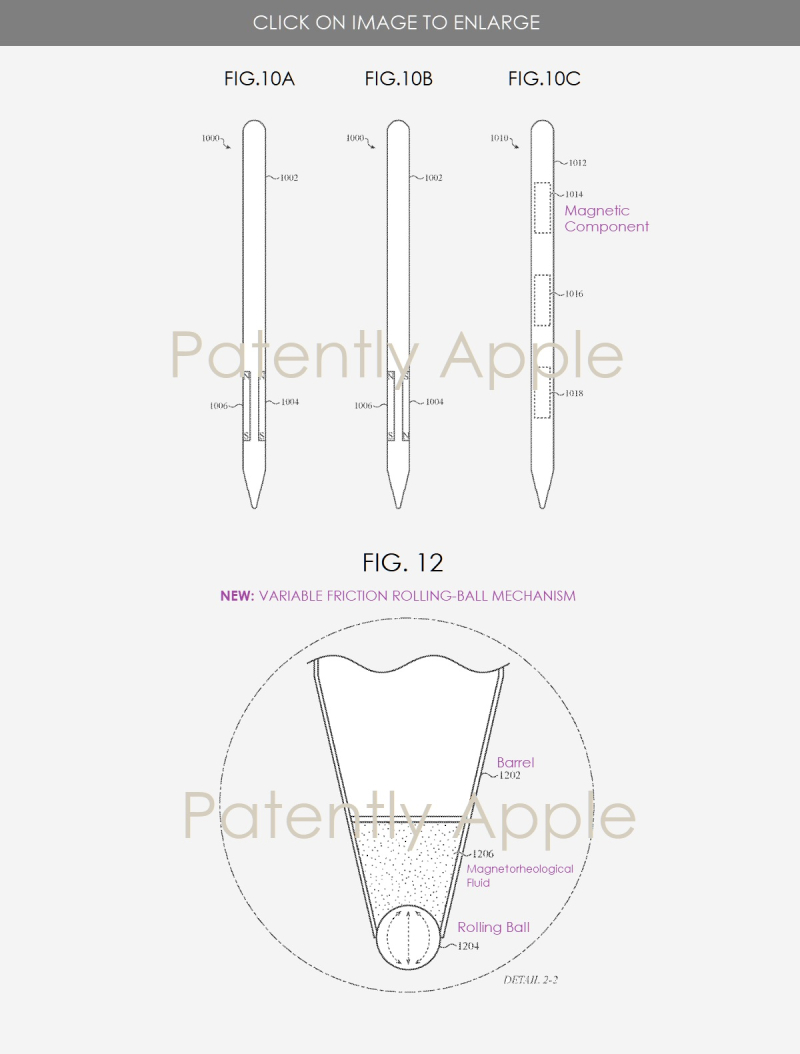 Apple notes that patent FIG. 12 abo e shows an example of a rolling-point stylus #1200 that uses a fluid to vary the rolling resistance of the ball.

In particular, the new stylus includes a barrel #1202 and a rolling ball #1204 retained to the barre. The rolling ball may be capable of rotating in substantially any direction, similar to a ballpoint pen.

You have to wonder if Apple will brand it a "Pen" rather than a "Pencil" with this new rolling-point design.

Apple further states that the stylus also includes a controllable fluid #1206 (e.g., a magnetorheological fluid) or other actuator that can selectively control the rolling resistance of the ball by changing a property of the fluid.

The stylus may control the properties of the fluid in any suitable way, such as by applying or removing an electrical current or a magnetic field to the fluid. The fluid may directly contact the ball or it may be used to force a friction pad or other member against the ball.

Also, in some cases, an actuator may not use fluid, but instead may impart a force to vary the rolling resistance using other techniques. For example, the stylus may use an electrical (e.g., a solenoid) actuator.

By varying the rolling resistance of the ball, the stylus may provide physical and/or tactile information to a user. For example, the rolling resistance of the ball  may be increased when a user moves the stylus off a suggested path or away from a target location, which may help guide the user back to the suggested path or towards the target location.

One example is presented below in patent FIG. 13A below which shows a haptic output being produced during a writing training exercise. For example, the iPad Pro is displaying an outline of a letter #1306 that is intended for the user to trace. This may be part of an educational application for individuals learning to write or learning a new language or alphabet. 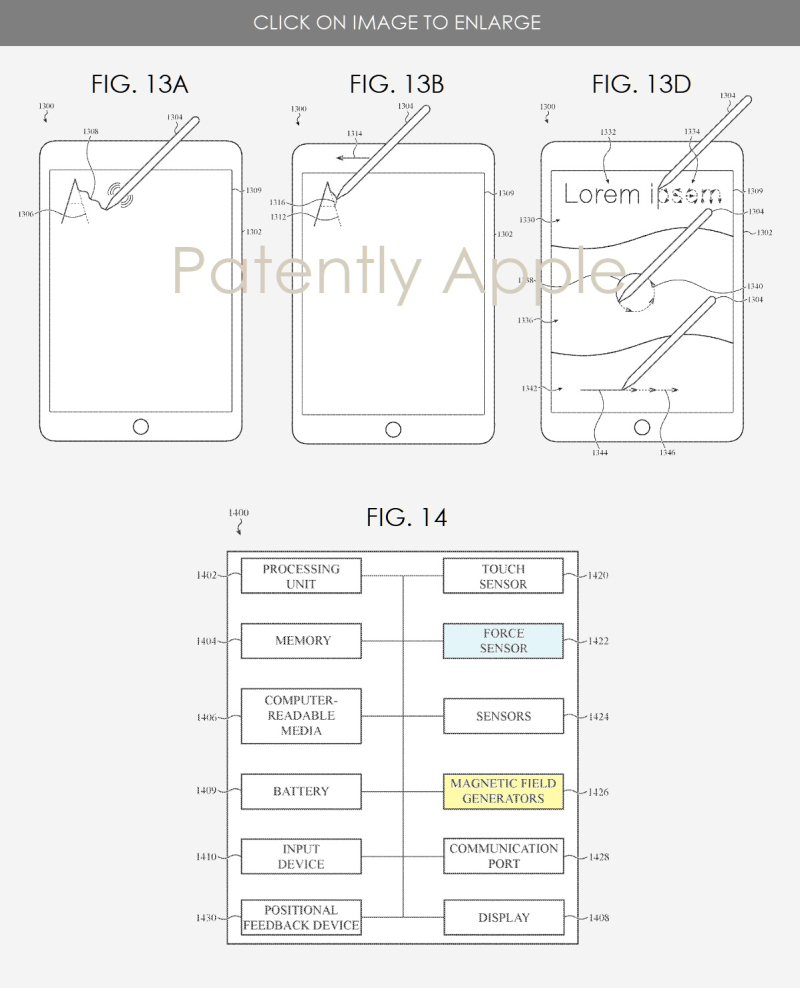 If the iPad Pro determines that Apple Pencil has deviated from the outline of the letter #1306 (e.g., path #1308), Apple Pencil may produce a haptic output, such as a vibration (as shown).

When a deviation is detected, Apple Pencil may also or instead produce force-based outputs such as directional forces (as shown in FIG. 13B), increased frictional forces (e.g., by electromagnetically attracting Apple Pencil to the iPad Pro or using a driven or variable-resistance rolling-ball mechanism.

Apple's granted patent 10,437,359 was originally filed in Q1 2017 and published today by the US Patent and Trademark Office.