Travel photographer and tech geek Austin Mann who has reported on many Apple iPhone cameras in the past, published his latest project of reviewing the iPhone 11 Pro earlier today.

Austin Mann's latest report covers his testing of the iPhone 11 Pro’s new capabilities including the Ultra Wide lens, Night Mode, Capture Outside the Frame along with iOS 13 management, editing tools and more.

Seeing in the Dark

In this segment of Mann's report he notes that "As long as I can remember, the top question I’ve received from iPhone photographers, beginners and pros alike, is How can I shoot better pictures in low light?

This year’s addition of Night mode is the answer to the question. It’s easy to use, crazy powerful, and because it’s automatic it will completely change how everyone shoots on their iPhone."

The amazing first photo shown below was shot in Guilin where there are some  amazing landscapes and rivers. Mann spent some time on a boat owned by Huang Gaohui photographing him on his boat at sunset/dusk. It was an incredibly beautiful scene and the perfect place to test some of the new capabilities of iPhone 11 Pro, especially Night mode. 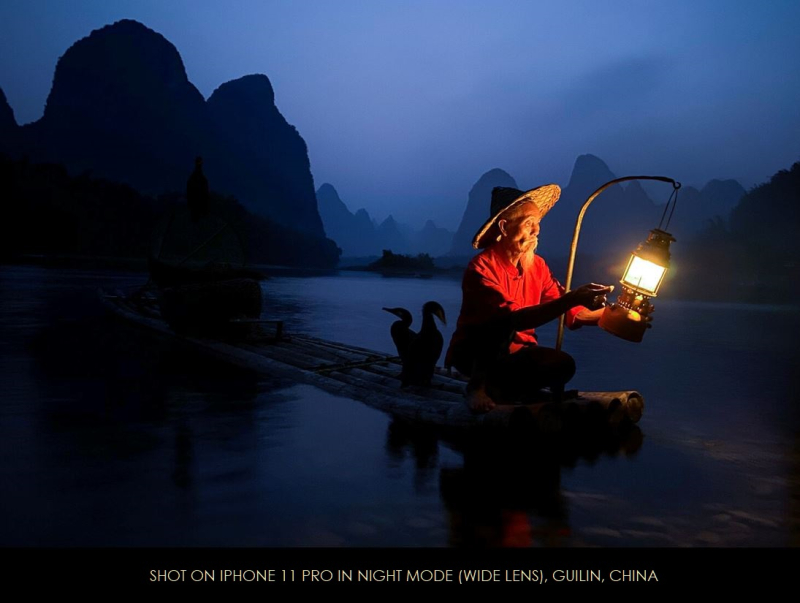 Mann later said that it was good to see the iPhone 11 Pro having caught up in low light performance to phones by Huawei and Pixel 3. Patently Apple posted a report back in March where Huawei mocked Apple's iPhone XS Max as being unable to capture night shots properly as shown below. The photo below shows off Apple's new Night Mode and the difference from an iPhone XS shot versus the iPhone 11 Pro is like night and day. It's dramatic. 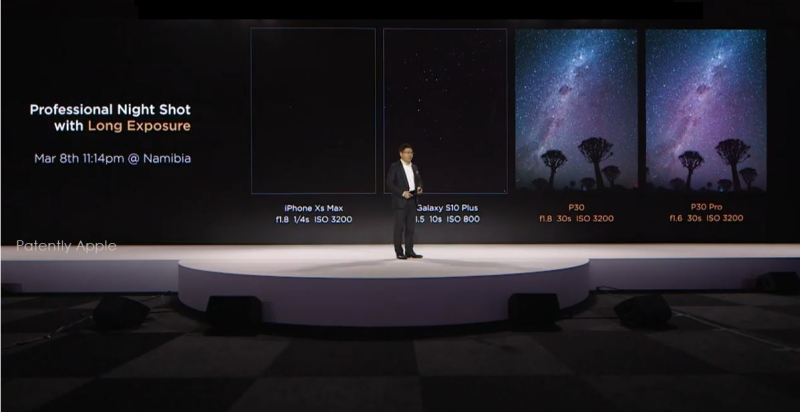 Mann added that he was "really impressed by Night mode’s overall preservation of color — in some scenarios, the iPhone 11 Pro pulled out colors in low light scenes I couldn’t even see with my naked eye.

I think I can say this is easily the most dramatic leap forward we’ve seen since the introduction of panorama mode on the iPhone 5 in 2012. It’s the first time in a long time I’ve looked at an image and said to myself "wow, I can’t believe I shot this with my phone."

When Mann first heard about improvements in how the iPhone 11 Pro renders skin tones, he was excited. "We’ve all seen how Smart HDR occasionally renders skin tones with that weird flat/posterized/orange look, so I was anxious to see if this problem is solved.

Where I’ve seen Smart HDR look the weirdest is underexposed shots, so I tried it on the plane over with a selfie. I shot the following images with the front-facing TrueDepth camera and adjusted the exposure down as far as it would let me. 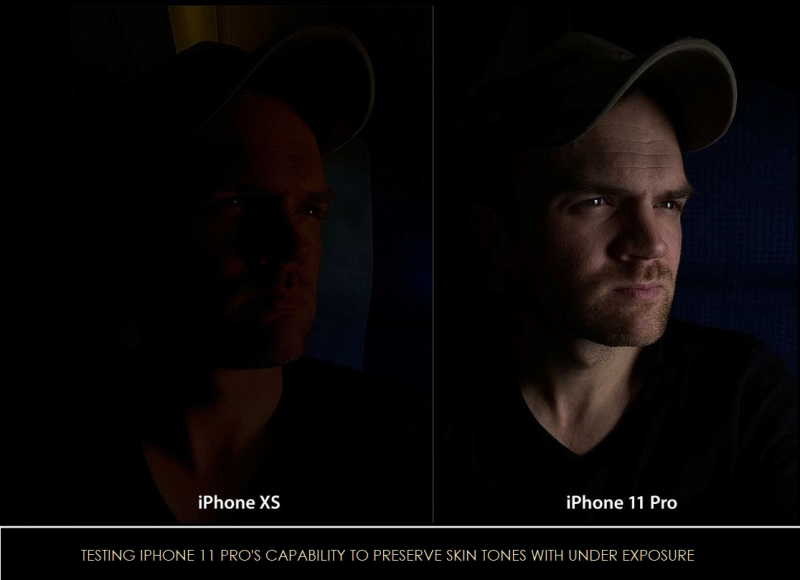 Apple calls this new approach “semantic rendering” in which their software isolates skin, eyes, and teeth in order to properly preserve the texture and contrast of these features in a photograph. Judging by the images above, I’d say it works pretty well.

Capture Outside the Frame

One of the most interesting camera features introduced this year is "Capture Outside the Frame." Basically, if I’m shooting with the Wide (26 mm), the iPhone 11 Pro is also capturing with the Ultra Wide (13 mm) so I can decide later about my framing. If the software detects a human on the edge of your frame, a little icon pops up to indicate you might want to crop out which is pretty cool. As part of this feature, I can see what’s just outside of my frame (a preview of what would be included in my shot if I switched to the Ultra Wide 13 mm).

This new feature however was a hit and miss and Mann explains what he didn't like about this feature in his full review here.