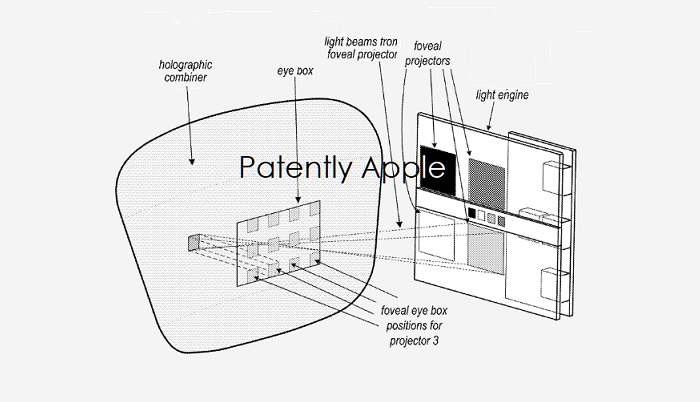 Today the US Patent & Trademark Office published a patent application from Apple that relates to a newly advanced mixed reality headset that addresses "accommodation-convergence mismatch problems" that could cause eyestrain, headaches, and/or nausea in some headsets.

According to Apple, accommodation-convergence mismatch arises when a VR or AR system effectively confuses the brain of a user by generating scene content that does not match the depth expected by the brain based on the stereo convergence of the two eyes of the user.

Accommodation-convergence mismatch problems are undesirable and may distract users or otherwise detract from their enjoyment and endurance levels (i.e. tolerance) of virtual reality or augmented reality environments.

While at least some embodiments may provide mixed reality, for simplicity the system may generally be referred to herein as an AR system.

Embodiments of an AR headset (e.g., a helmet, goggles, or glasses) are described that may include or implement different techniques and components of the AR system.

In some embodiments, an AR headset may include a reflective holographic combiner to direct light from a projector light engine into the user's eye, while also transmitting light from the user's environment to thus provide an augmented view of reality.

In some embodiments, the holographic combiner may be recorded with a series of point to point holograms; one projection point interacts with multiple holograms to project light onto multiple eye box points. In some embodiments, the holograms are arranged so that neighboring eye box points are illuminated from different projection points.

In some embodiments, the holographic combiner and light engine may be arranged to separately project light fields with different fields of view and resolution that optimize performance, system complexity and efficiency, so as to match the visual acuity of the eye. In some embodiments, the light engine may include foveal projectors that generally project wider diameter beams over a smaller central field of view, and peripheral projectors that generally project smaller diameter beams over a wider field of view.

In some embodiments, the light engine includes a lens for each projector to focus emitted light beams such that, once reflected off the holographic combiner, the light is substantially collimated again when it enters the subject's eye. The required focal surface may be complicated by the astigmatism of the holographic combiner, but is a curved surface in front of the combiner.

In some embodiments, active beam focusing elements may be provided for each projection point. This may reduce or eliminate the need to change beam diameter with angle. This may also enable beams that diverge into the eye to, rather than being collimated, match the beam divergence of the supposed depth of the virtual object(s) being projected by the light engine.

With the methods and apparatus presented above, the AR system may not require extra moving parts or mechanically active elements to compensate for the eye changing position in the eye box or for the changing optical power from the holographic combiner during the scan, which simplifies the system architecture when compared to other direct retinal projector systems.

Apple's patent FIG. 4 below illustrates a direct retinal projector system that uses a curved ellipsoid mirror to direct light from a projector into a subject's eye, while also transmitting light from the environment to the subject's eye. 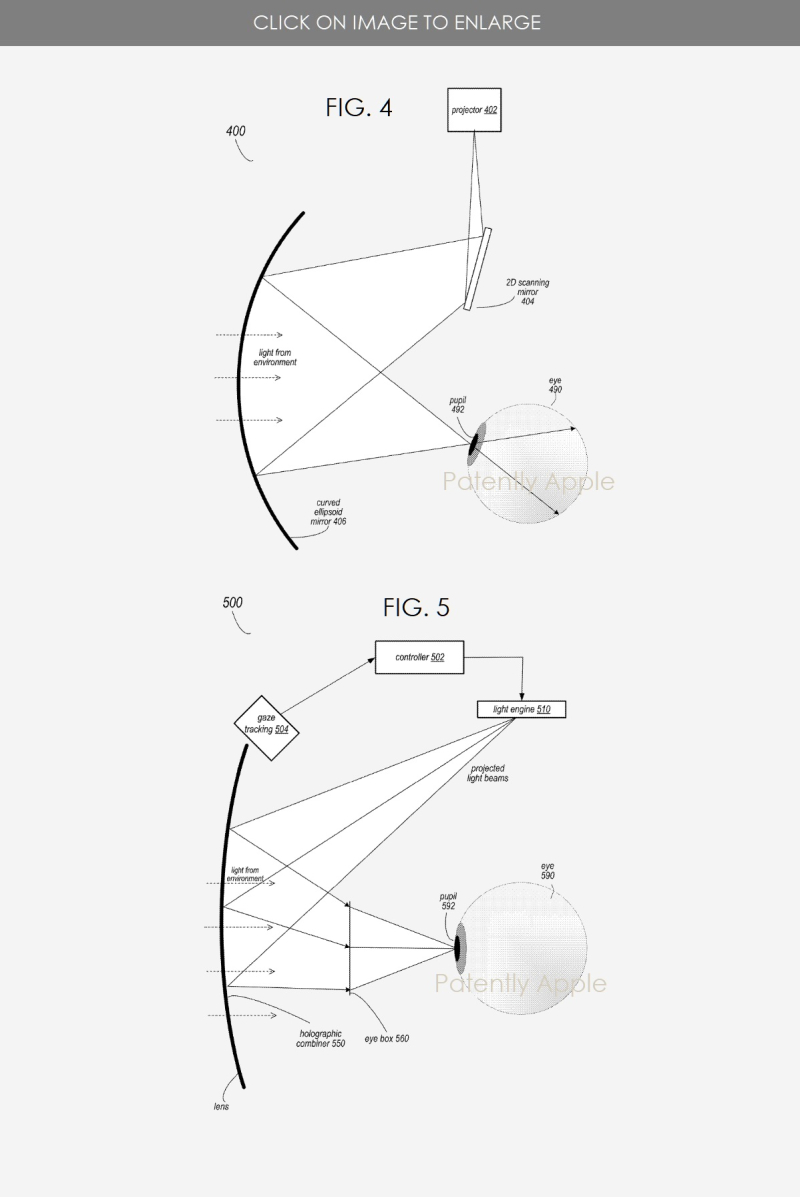 Apple's patent FIG. 5 above illustrates an augmented reality (AR) system that uses a reflective holographic combiner to direct light from a light engine into a subject's eye, while also transmitting light from the environment to the subject's eye.

Apple's patent FIG. 6 below illustrates an AR headset that includes a reflective holographic combiner to direct light from a light engine into a subject's eye, while also transmitting light from the environment to the subject's eye. 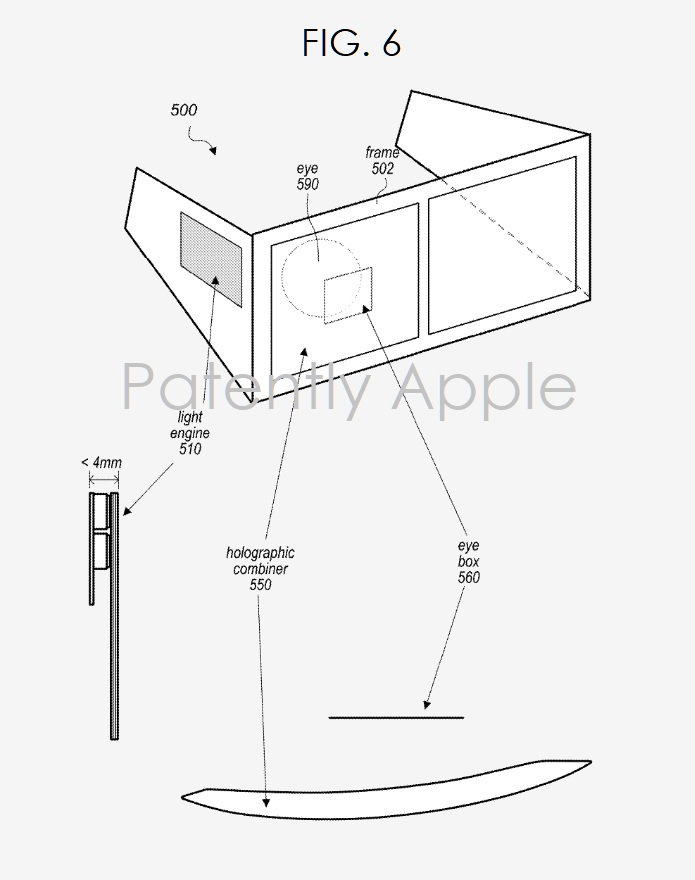 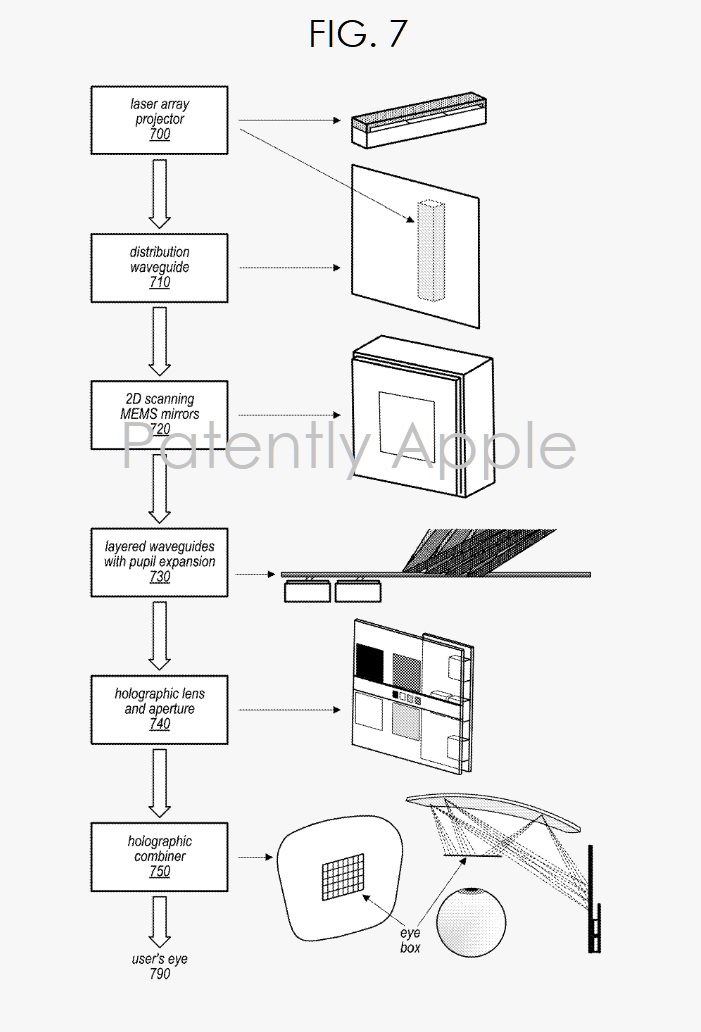 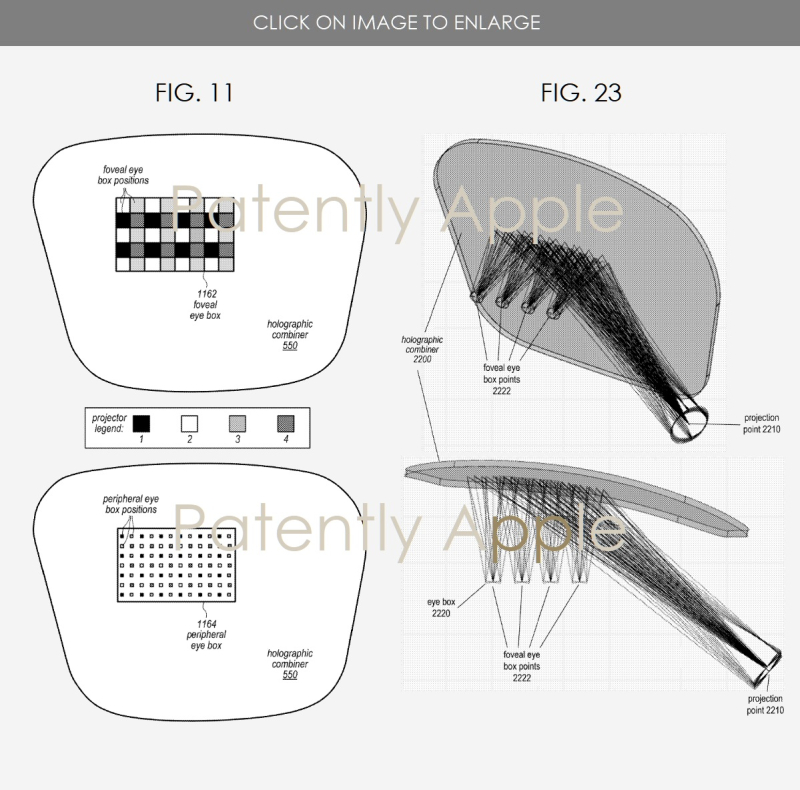 Alexander Shpunt: Architect. Shpunt came to Apple via the acquisition of PrimeSense where he was the Chief Technical Officer.

About Making Comments on our Site: Patently Apple reserves the right to post, dismiss or edit any comments. Apple IP 20190285897