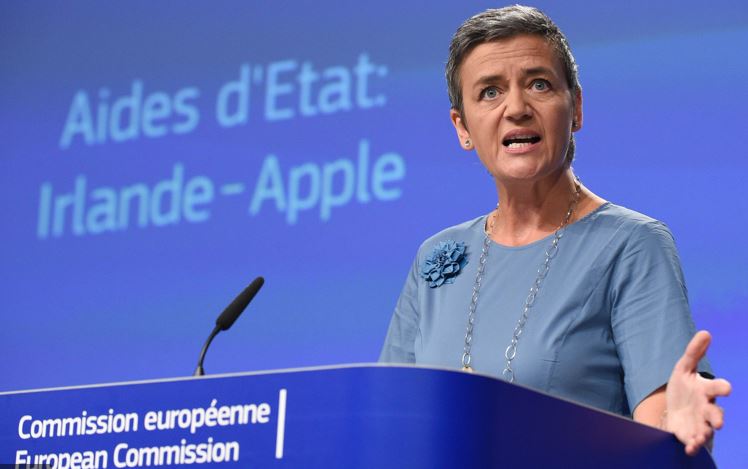 In mid-August Patently Apple posted a report titled "Apple's €13 Billion Battle with the European Union will Finally go to Court In Mid-September." Our report noted that "The EU’s General Court, its second-highest tribunal, will hear arguments in the challenges by Apple and Ireland over two days set for Sept. 17-18. The U.S. last year lost a bid to intervene in the case in support of Apple." The EU Commission Antitrust case, led by Margrethe Vestager, accused Apple of avoiding taxes for more than 20 years.

On Tuesday and Wednesday the court battle begins when judges in Luxembourg hear arguments from both sides. Will we hear the ruling on this matter once and for all this week? No.

In a report published by the Financial Times today "A ruling is expected by the end of next year. But whatever the outcome, the losing party is set to appeal. After that, an appeal is likely to go through the European Court of Justice where the case is expected to take three to four years to reach a conclusion."

The report further noted that "Apple has accused Brussels of 'legal mumbo jumbo.' In 2016 its CFO, Luca Maestri, said the commission was ignoring the reality that Apple’s research and development happens at its Cupertino headquarters, whereas Ireland only performs distribution, procurement and logistics.“They are simply pretending that all the value of the Apple products are generated in [the Irish city of] Cork."

Ireland has long complained that the EU has interfered with its sovereignty, misunderstood state-aid rules, and accused Brussels of undermining Ireland's low corporate tax-regime. For more on this, read the full Financial Times report