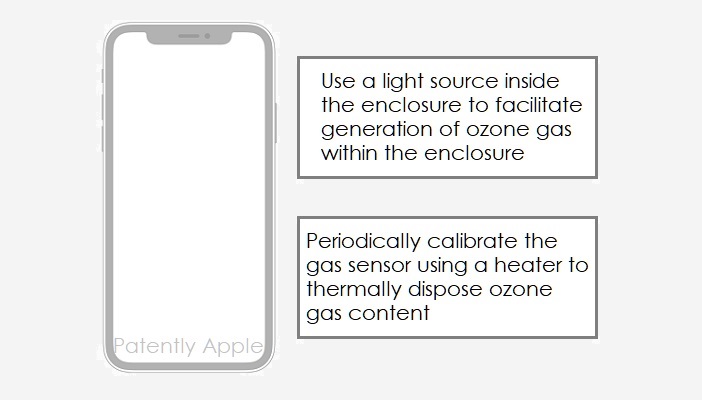 On August 22nd Patently Apple posted a patent report relating to Future iPhones with Gas Sensors and on Thursday August 29th the U.S. Patent Office published yet another Apple patent application relating to another possible aspect of the technology aimed for future iDevices that could notify device owners of dangerous levels of gas in their environment. This time Apple focuses on the addition of a new specialty ozone sensor to detect dangerous gasses.

In the big picture, miniature gas sensors for consumer electronics represent a technology category that could enable upcoming features and/or products in applications such as, e.g., environmental and health monitoring, smart homes, and internet of things (IoT).

Chemical poisoning and deactivation of the sensor materials in metal oxide sensors, however, can cause drift in both baseline resistance and sensitivity, which can pose great challenges to the mass market adoption of miniature gas sensors. Apple's invention addresses this challenge.

Apple notes that in one or more aspects, the subject technology is directed to devices and configurations for an in-sensor span calibration of a micro electro-mechanical system (MEMS) ozone (03) sensor in devices such as a smartphone or smartwatch.

The disclosed solution is to integrate a controllable UV light source within an enclosure of a gas-sensing device along with a sensor, selective to ozone gas, including a metal-oxide (MOX) or an electrochemical ozone gas sensor or another ozone gas sensor.

The UV light source can be activated, for example, periodically to produce small quantities of ozone gas, which would be used as span calibration point(s) for the MOX sensor.

The level of ozone gas generated may be dependent on a number of conditions such as the sensor geometry, ambient air temperature, relative humidity, barometric pressure and presence of ozone and/or cross sensitive gases and/or other factors. These conditions can be detected with co-located sensors, or be modeled based upon multiple parameters such as location, time of day, weather condition and the like.

The drive scheme of the UV light source can be a periodic or pulse-width modulated (PWM) scheme, and the intensity and duration of the UV source can be varied to provide various span calibration levels. In situations where the carrier (ambient) gas cannot be treated to reach a near zero-level of ozone, the in-sensor ozone gas generation technique could still be utilized to increase the level of ozone gas to create a specified ozone concentration delta. This would allow achieving an effective span calibration of the ozone gas.

Apple's patent FIG. 3 below is a schematic diagram illustrating an example of a miniature gas-sensing device capable of in-sensor span calibration. 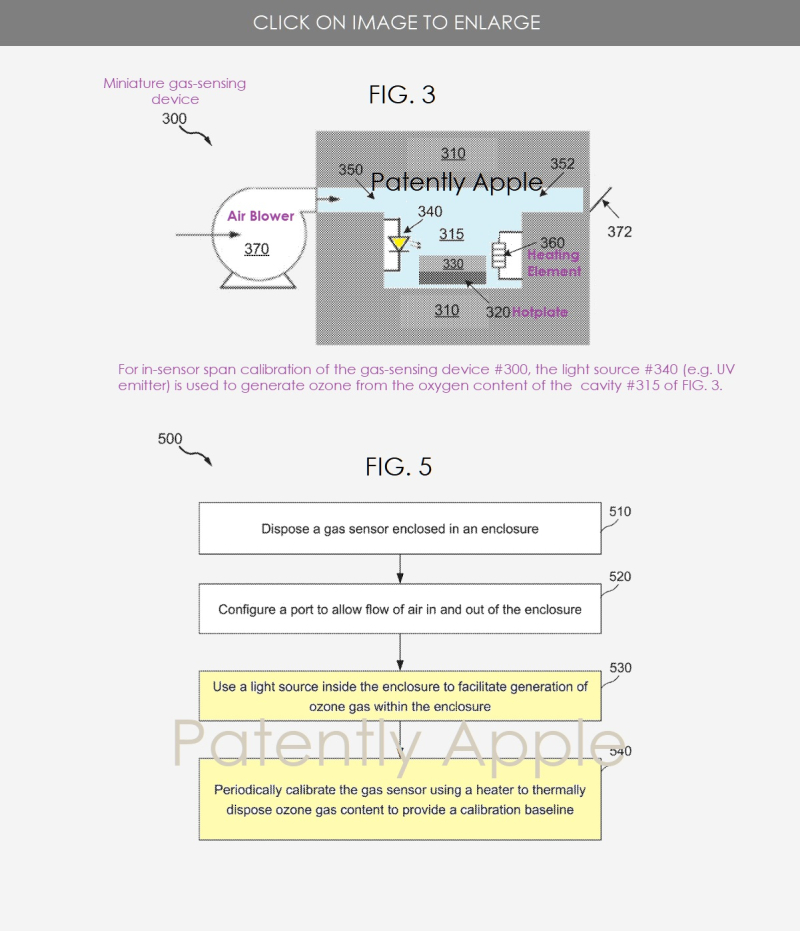 Apple's patent FIG. 5 above is a flow diagram illustrating an example method of providing of a miniature gas-sensing device capable of in-sensor span calibration. A light source (#340) inside the enclosure may be used to facilitate generation of ozone gas within the enclosure (#530). The gas sensor is periodically calibrated, in some implementations using a heating element to thermally dispose ozone gas content to provide a calibration baseline (#540).

Apple's patent application that was published on Thursday by the U.S. Patent Office was filed in Q1 2019 with references to a 2018 provisional patent. Considering that this is a patent application, the timing of such a product to market is unknown at this time.

Other gas sensor related patent reports include the following:

01 – January 24, 2019:  One of Apple's Next Health Sensors for iDevices could save your Life by Detecting Invisible Deadly Gases

About Making Comments on our Site: Patently Apple reserves the right to post, dismiss or edit any comments. Those using abusive language or negative behavior will result in being blacklisted on Disqus. Apple IP 20190265183