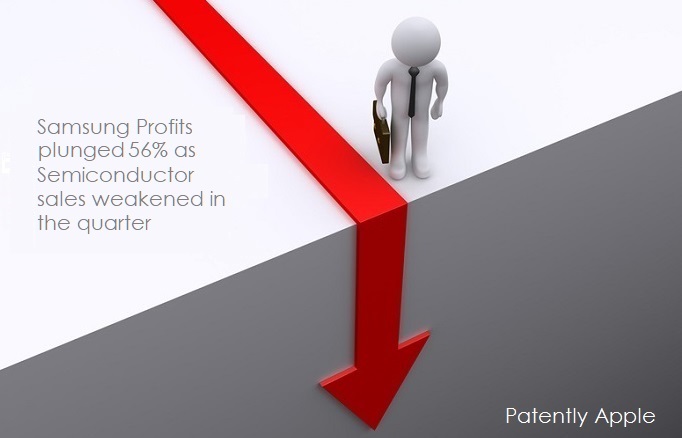 On April 29th Patently Apple posted a report titled "Samsung Posts a 60% Drop in Q1 Operating Profit." Today Samsung announced that they saw its operating profit plunge 56 percent in the second quarter from a year earlier due to weak semiconductor sales.

In the report, the tech giant estimated its second-quarter sales at 56 trillion won ($48 billion) and operating profit at 6.5 trillion won.

Sales and operating profit decreased by 4.2 percent and 56.3 percent, respectively, from a year earlier.

Although the guidance did not give details on the performance of each business, analysts surmised that slow sales of DRAM and NAND flash chips, which account for about two-thirds of the firm's sales, may have dragged down its profitability.

Kim Un-ho, an analyst at IBK Investment & Securities commented for the report by stating that "It is expected to take more time for the memory chip market to get back on track as prices are anticipated to keep sliding in the second half of this year. Chip demand for servers is expected to increase in the latter half, but it will be hovering below earlier estimates."

The mobile division was also expected to have lackluster profits despite strong sales of Galaxy A series in emerging markets as the average sales prices of the midrange smartphones are cheaper than the flagship line.

Park Gang-ho, an analyst at Daishin Securities stated for the report that "Samsung’s smartphone sales are expected to weaken in the third quarter compared with a quarter earlier despite the release of the Galaxy Note 10 launching on August 7th.

To boost demand in the premium segment, Samsung plans to unveil its latest phablet, the Galaxy Note 10, on Aug. 7 in New York,

Some analysts cited unfavorable factors facing the semiconductor and display markets, including a prolonged trade war between the United States and China in addition to Japan's decision to tighten the rules for exports of high-tech materials and chemicals needed for manufacturing semiconductors and displays.

On June 21st Patently Apple posted a report titled "Apple is Reportedly in a dispute with Samsung over a Contract Penalty kicking in due to Lower than Expected OLED Demand." Yet for Q2 Samsung's only bright spot this quarter came by way of better  sales of premium OLED displays.

Hana Financial Investment analyst Kim Kyung-min who reviewed Samsung's financials stated that "The weak Korean won and increased profit from flexible OLED displays may have resulted in improvement of the firm's operating profit compared to the previous quarter." There appears to be a contradiction here with Samsung's better profits from OLEDs and Apple not meeting supply levels per their contract.

It was also reported in South Korea that LG Electronics announced today that its second-quarter operating profit is expected to have dropped 15.4 percent from a year earlier, mainly due to its sluggish smartphone business.

Apple will be reporting calendar Q2 / fiscal Q3 2019 financials on July 30th. With Apple no longer breaking out iPhone sales for the quarter it's going to be difficult to determine the true status of their smartphone business for the quarter.