Home Archives Contact Us Subscribe Twitter MeWe Facebook Patently Mobile
The DOJ Sentenced a Chinese National for Trafficking Counterfeit Apple Products like iPhones in the U.S.
The White House Blacklist killed a new Smart Speaker that Huawei worked closely on with Google for a September Launch

Apple's CEO Confirms that Apple Card will roll out in August 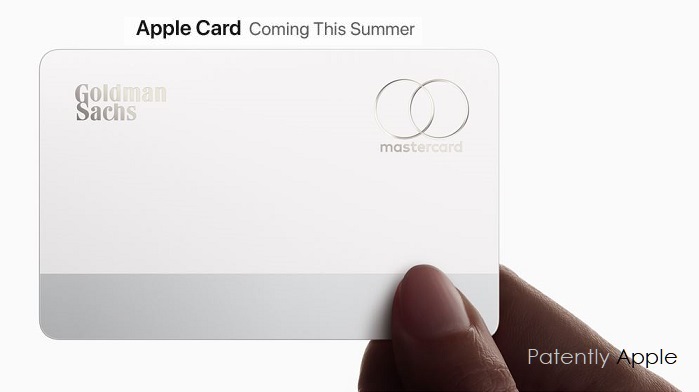 Last Friday Patently Apple posted a report titled "Even with a few Tense Moments behind the Scenes, Apple Card is Rumored to be Launching Sometime in August." During yesterday's financial conference call, Apple's CEO Tim Cook stated during his traditional opening statement that Apple Card would be launching in August.

Cook's revelation on the release time-frame of Apple Card came at the end of his commentary on Apple Pay as follows:

"Apple Pay launched in 17 countries in the June quarter, completing our coverage in the European Union and bringing us to a total of 47 markets currently. Based on June quarter performance, Apple Pay is now adding more new users than Pay Pal, and monthly transaction volume is growing four times as fast.

In the United States, in addition to a successful integration into Portland's transit system in May, we're beginning the rollout of New York City transit and will launch in Chicago later this year.

In China, Apple Pay launched the payment card for Didi, the world's largest ride-hailing provider. As I've said before transit integration is a major driver of a broader digital wallet adoption and we're going to keep up this push to help users leave their wallet at home. In more and more.

On a related note, thousands of Apple employees are using Apple card every day in our beta test and, we plan to begin the rollout of Apple card in August.

Apple's CFO Luca Maestri confirmed this news when answering questions posed by Shannon Cross, Cross Research. Maestri stated that "As Tim said, we starting the rollout of Apple Card in August, and still more important services, that we're going to be adding to our portfolio during the fall."

When answering Citigroup's question, Maestri stated in-part: "We talked about a lot of new services that we are launching during the fall, and Apple Card next month, obviously, they will require the appropriate level of marketing and advertising as we launch them to the general public.