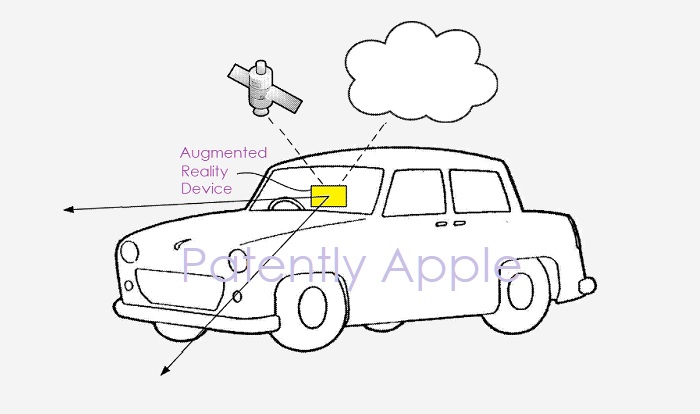 Today the US Patent & Trademark Office published a patent application from Apple that relates to an augmented reality device to provide next generation navigation for Maps. The AR device could be built into future vehicles (a Project Titan vehicle or not). Alternatively, the AR device could be a pair of smartglasses or a next-gen iPhone sitting on the vehicle's dashboard. The devices must have  an advanced AR camera built into them in order to enable the use of this proposed augmented reality mapping system.

Apple patent application states that an augmented reality device can enhance and improve the ease at which a device can convey lane guidance information to a user that is traveling along a route.

The device can capture a series of images (e.g., video footage) in front of the augmented reality device that closely represents what is actually perceived by the user, and display the captured series of images in real time, e.g., on a screen of the device or as a projection.

Concurrently, the device can superimpose a navigational layer over the displayed captured images to guide the user into one or more lanes that would best position the user to proceed along the route.

To enable this functionality, the augmented reality device can be configured to communicate with one or more global positioning system (GPS) satellites and one or more route servers. The GPS satellites can utilize triangulation to provide the location of the device, and the route server can utilize one or more databases to provide route information regarding the route of travel between an origin location and a destination location (or to each intervening location between the origin and destination locations).

With this information, the augmented reality device can analyze the video footage to determine the number of available lanes. The device can then correlate the video footage with the location of the device, which can be taken as the location of the vehicle, and identify one or more designated lanes from the one or more available lanes in which the vehicle should be traveling to stay in the route. The device can display the series of images along with a navigational layer over the series of images to guide the user into the correct lane, or a plurality of correct lanes, if applicable.

In some embodiments, the navigational layer can block out regions (e.g., lanes, curbs, sidewalks) of the captured images where the vehicle is not intended to travel, and leave unblocked regions (e.g., lanes) where the vehicle is intended to travel. That way, the user can clearly understand which lane he or she should be in. In additional embodiments, the navigational layer can include an indicator positioned over the unblocked region.

In another instance, the indictor can be a series of multiple diagonal arrows that blink in a sequential order indicating the same. The indicator can blink to convey a degree of urgency at which the user should perform the indicated task.

Devices that provide navigation using symbols require the user to decipher the symbols in real time and immediately apply them to what the user is perceiving, which may not always be easy to do. 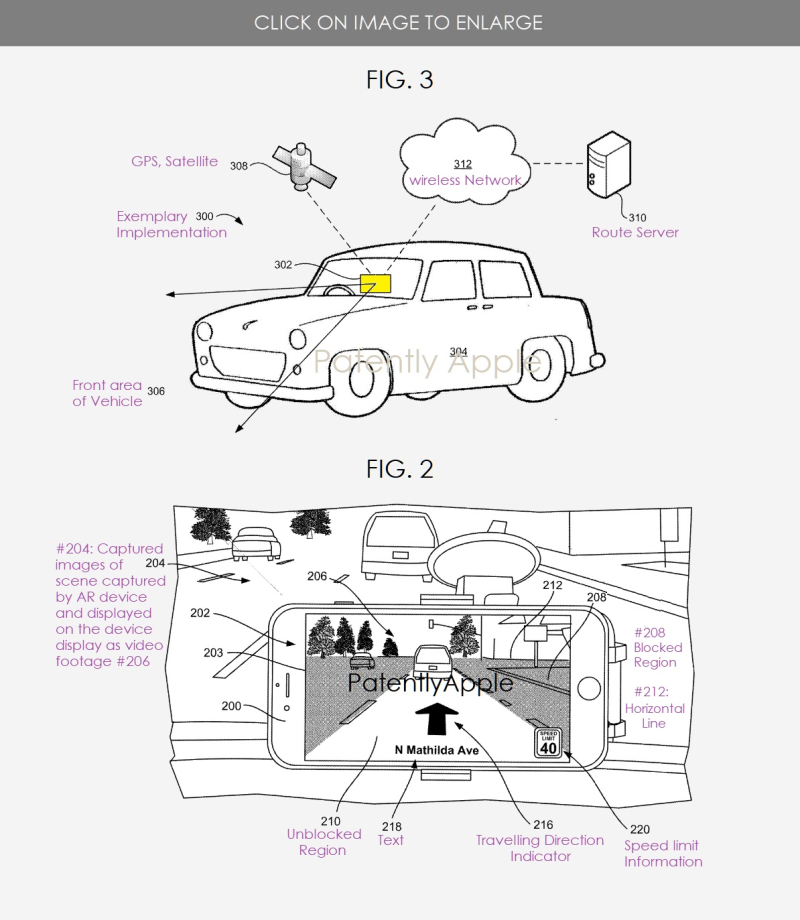 The augmented reality device can be used in a vehicle that is capable of being driven or otherwise controlled by a user. In some embodiments, the augmented reality device can include a camera (not shown) for capturing images of front area (#306), or can include hardware and software for communicating with a separate camera positioned to capture images of the front area.

To enable the augmented reality device to provide navigational and/or lane guidance functions, the device can be configured to communicate with external devices, such as one or more GPS satellites (#308) and a route server (#310) through a wireless network (#312).

While the AR device could be a future custom device, Apple notes that "the device could be an iPhone [with a next gen AR backside camera that has already been forecasted] or a pair of smartglasses."

In a somewhat humorous note describing the AR interface of FIG. 2, Apple notes that "By providing horizon (#212), the navigational layer can clearly indicate that the blocked region (#208) applies to the ground upon which the user is traveling and not the sky." Gee, thanks, I wouldn't want to make that mistake. 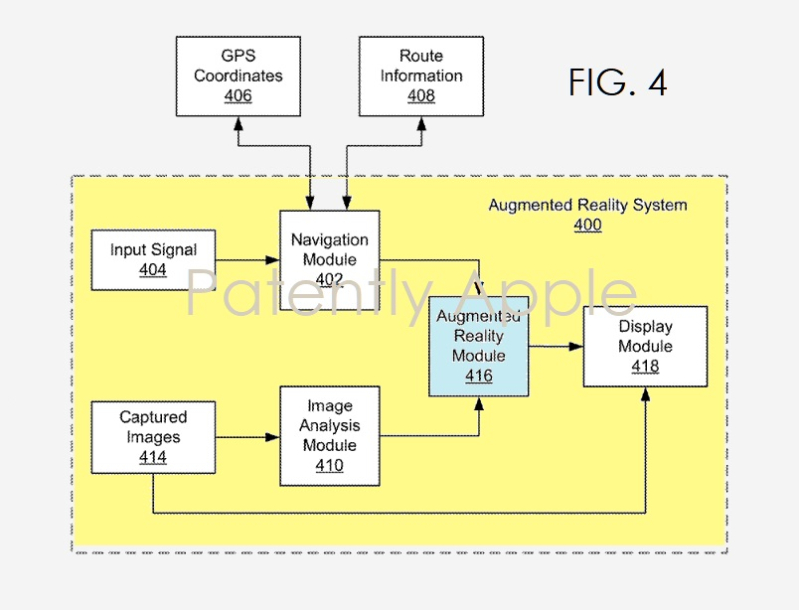 Apple's patent FIG. 5A below is a simplified top-down diagram of a vehicle traveling along a segment of an exemplary route; FIGS. 5B and 5C are snapshots illustrating a navigational layer superimposed over captured images for an exemplary case where only one lane in a multi-lane segment of road is a designated lane. 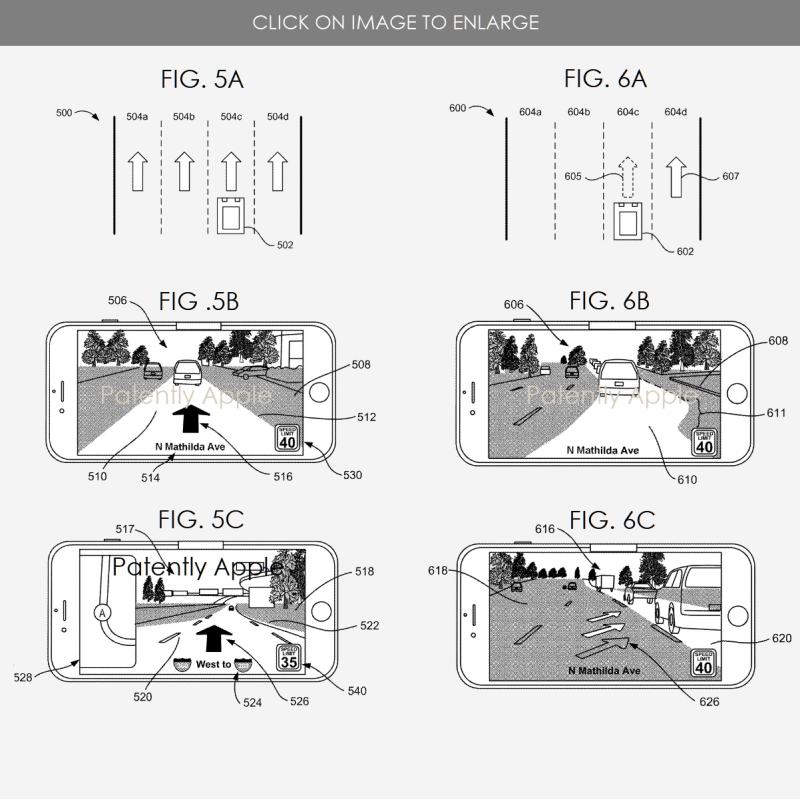 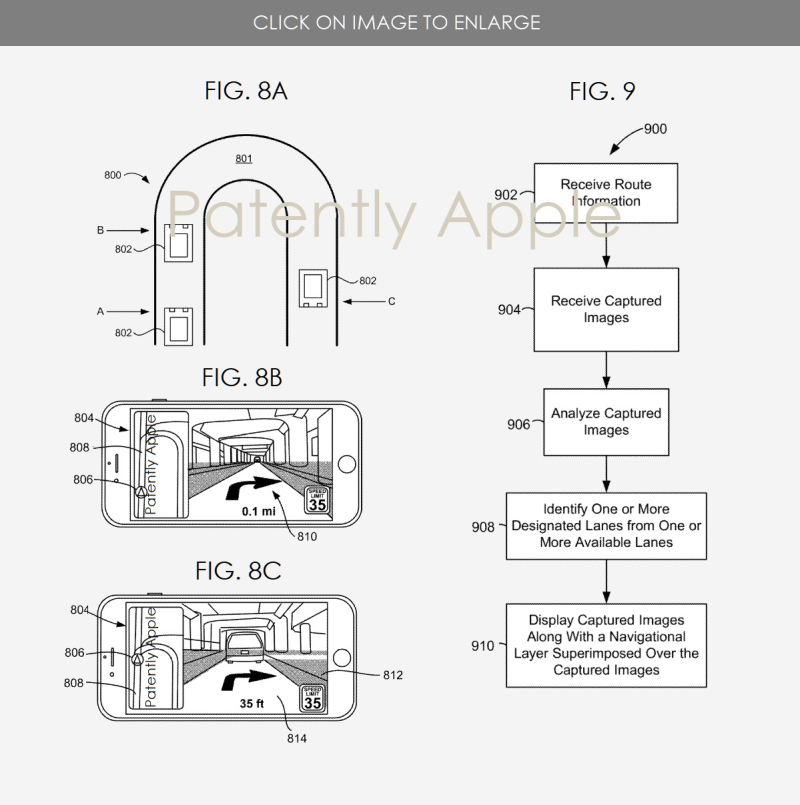 Apple's patent FIG. 9 above is a block diagram of a method for performing navigation and lane guidance.

Apple's patent application that was published today by the U.S. Patent Office was filed back in Q1 2019. Some of the work dated back to Q1 2018. Considering that this is a patent application, the timing of such a product to market is unknown at this time.