Huawei and Xiaomi ate into Apple's market share Big Time in Europe, the Middle East and Africa in Q1 2019 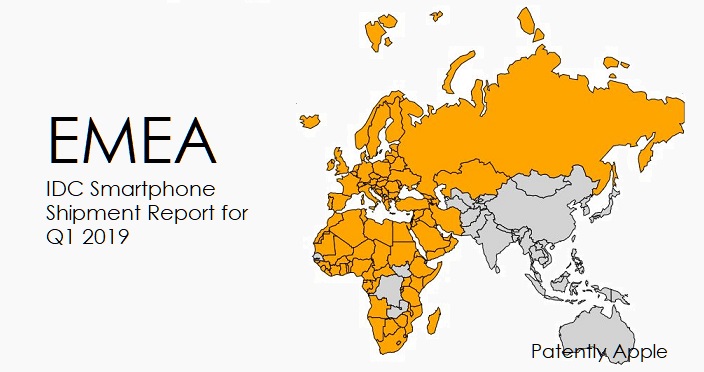 Late yesterday IDC reported on Q1 2019 smartphone shipments in Europe, the Middle East and Africa – known as the EMEA market. The exact countries in this market can be reviewed here. The EMEA smartphone market reached 83.7 million units in the first quarter of the year, a 3.3% drop on the same quarter last year — confirming recent trends of a slowing market.

For Apple, Marta Pinto, research manager at IDC EMEA stated for the report that "In brands, Huawei continued to make incremental advances, and so did Xiaomi, while Apple had a tough quarter, with its 23% market share across Europe the lowest Q1 result in five years."

IDC's chart below shows Apple's shipments falling 22.73% Year over Year while Huawei, with close to 50% of their shipments being under $200, grew 66%. The second biggest gains went to Xiaomi at 33%. Both Chinese companies primarily ate into Apple's market share while only dinging Samsung.

IDC mentioned the blacklisting of Huawei in the U.S. on May 16 is creating  many unknowns, and uncertainty. It may begin to affect Huawei's growth in future quarters if nothing gets resolved with the U.S. government. Read more of IDC's report here.