Apple is known to be working on a VR headset and beyond mere rumors, there are many patents illustrating this fact.  One of their patents that came to light in March covered a Thermal Regulation System in order to keep a VR gaming fan's face cool while playing games for extended periods of time.

While Google has dabbled with a VR Headset using Android smartphones as the headset's display called Daydream View – it appears that they may have bigger plans down the road.

Earlier this month the US Patent & Trademark Office published a patent application from Google relating to a possible future VR headset that will implement an advanced phase-change cooling system so that a VR gamer's face can remain relatively cool when playing for long periods of time, just like Apple's plans are but using a different technology approach.

Google notes in their patent application that a traditional phase-change chamber is typically fabricated separately from the structure, adding expenses in terms of materials or construction. It is also limited in terms of the type of structure to which it might be applied, typically comprised of planar, two-dimensional (2D) surfaces.

As such, a traditional phase-change chamber is not applicable to a complex and curved, three-dimensional (3D) structure housing a virtual-reality headset, a personal assistant/smart speaker, a smartphone, or a gaming controller.

Google's invention covers the use of specific techniques, phase-change mechanisms and a phase-change material (PCM) that may be integrated as part of the structure, improving thermal control over the electronic system that might otherwise rely on convection or conduction based mechanisms.

A phase-change material (PCM) may be a fluid such as water, alcohol, or a refrigerant. The fluid may be in the form of a liquid, a vapor, or a combination of both. Furthermore, although a single fluid may be easiest to implement, mixtures of fluids may enhance thermal performance by altering surface tensions and allowing boiling to initiate more smoothly without excessive surface temperatures. Depending on a desired outcome, the fluids associated with a phase-change mechanism may be miscible or immiscible. 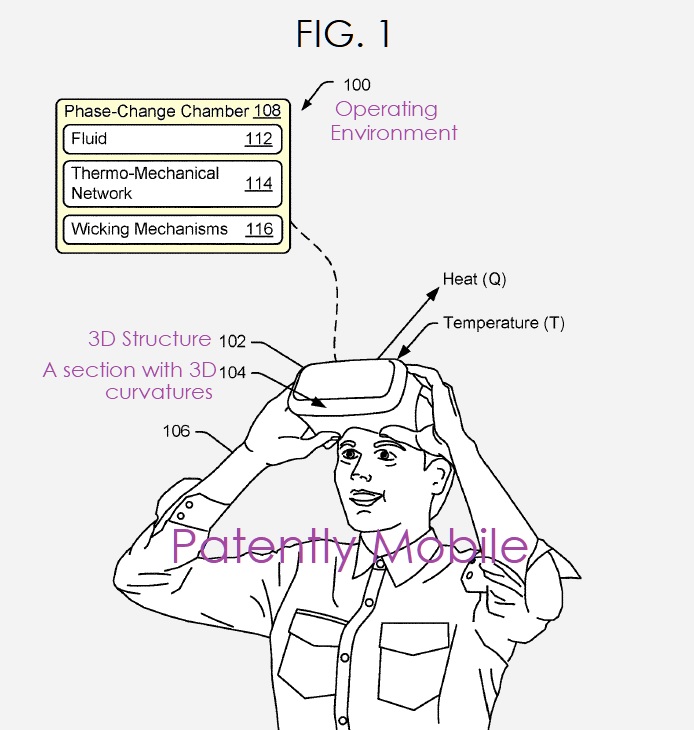 To learn more about this invention, check out our full Patently Mobile report here.