G20: The U.S. holds off on new Tariffs on China which spells relief for Apple and others Tech Companies 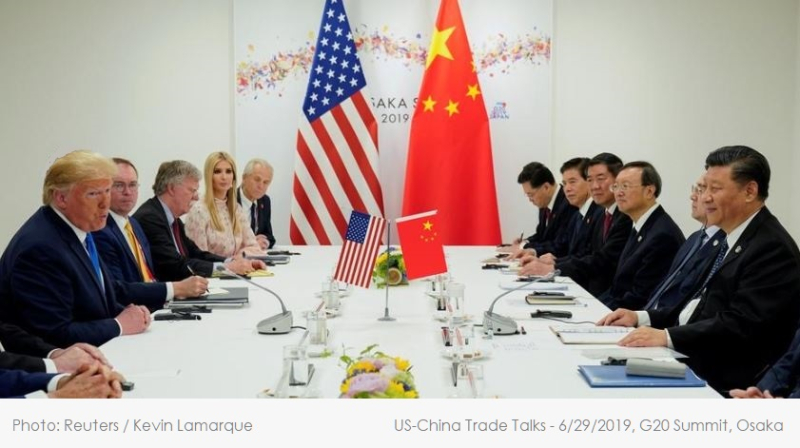 On June 20th Patently Apple posted a report titled "Apple, Dell, HP and others Speak Out on the U.S. Imposing new Tariffs on China," wherein we included the full letter that Apple sent to U.S. Trade Representative Robert Lighthizer. Apple urged the U.S. not to proceed with new tariffs. More specifically Apple noted that U.S. tariffs would also weigh on Apple’s global competitiveness. The Chinese producers we compete with in global markets do not have a significant presence in the U.S. market, and so would not be impacted by U.S. tariffs. Neither would our other major non-U.S. competitors. A U.S. tariff would, therefore, tilt the playing field in favor of our global competitors." Today Apple got its wish, at least in the short run.

Today, Silicon Valley and especially Apple have to be relieved that emerging from the G20 Summit in Osaka today is that the United States and China agreed to restart trade talks with Washington holding off new tariffs on Chinese exports, signaling a pause in the trade hostilities between the world’s two largest economies.

Trump told reporters after an 80-minute meeting with Chinese President Xi Jinping on the sidelines of a summit of leaders of the Group of 20 (G20) major economies in Osaka, western Japan: "We’re right back on track and we’ll see what happens. If we make a deal, it will be a very historic event."

Further, Trump stated that "We’re holding back on tariffs and they’re going to buy farm products,"” he said at a news conference, without giving any details of China’s future agricultural product purchases.

In a step of good faith, the Trump administration signaled that U.S. firms would be able to sell certain components to Huawei where there was no national security problem.

Trump added that the U.S. commerce department would meet in the next few days on whether to take it off a list of firms banned from buying components and technology from U.S. companies without government approval. China welcomed the step.

Wang Xiaolong, the Chinese foreign ministry’s envoy for G20 affairs said that "If the U.S. does what it says, then of course, we welcome it."

Jacob Parker, a vice-president of China operations at the U.S.-China Business Council stated: "Returning to negotiations is good news for the business community and breathes some much needed certainty into a slowly deteriorating relationship."

While the talks were positive, it all comes back to several key sticking points. The United States says:

China's position is that the United States is making unreasonable demands and must make additional concessions. Read more about this in the Reuters report.

New tariffs on China would have been very painful for Apple on most hardware but especially the upcoming iPhones in September. Shareholders can breathe a sigh of relief.