The U.S. Patent and Trademark Office officially published a series of 63 newly granted patents for Apple Inc. today. In this particular report we cover one of Apple's Project Titan inventions focused on "remotely-controlled driving control of a vehicle." For those who say that they'll never use a vehicle with an autonomous driving option, Apple may convince you otherwise with one new feature. Apple's granted patent covers a new emergency service for autonomous vehicles that could be lifesaving.

Apple patent states: "Remote driving control can be engaged based on determination, via processing vehicle sensor data, of a health emergency associated with one or more occupants of the vehicle, and the remote control system can generate remote driving commands which cause the vehicle to be navigated to a particular location without requiring the occupant associated with the health emergency to manually navigate the vehicle.

The remote control system can monitor the occupant via communicated vehicle sensor data and can control remote control devices included in the vehicle to provide external indication that the vehicle is being navigated according to remote driving control.

Apple's patent FIG. 1 below illustrates a schematic block diagram of a vehicle (#100) which comprises a vehicle navigation system (VNS) 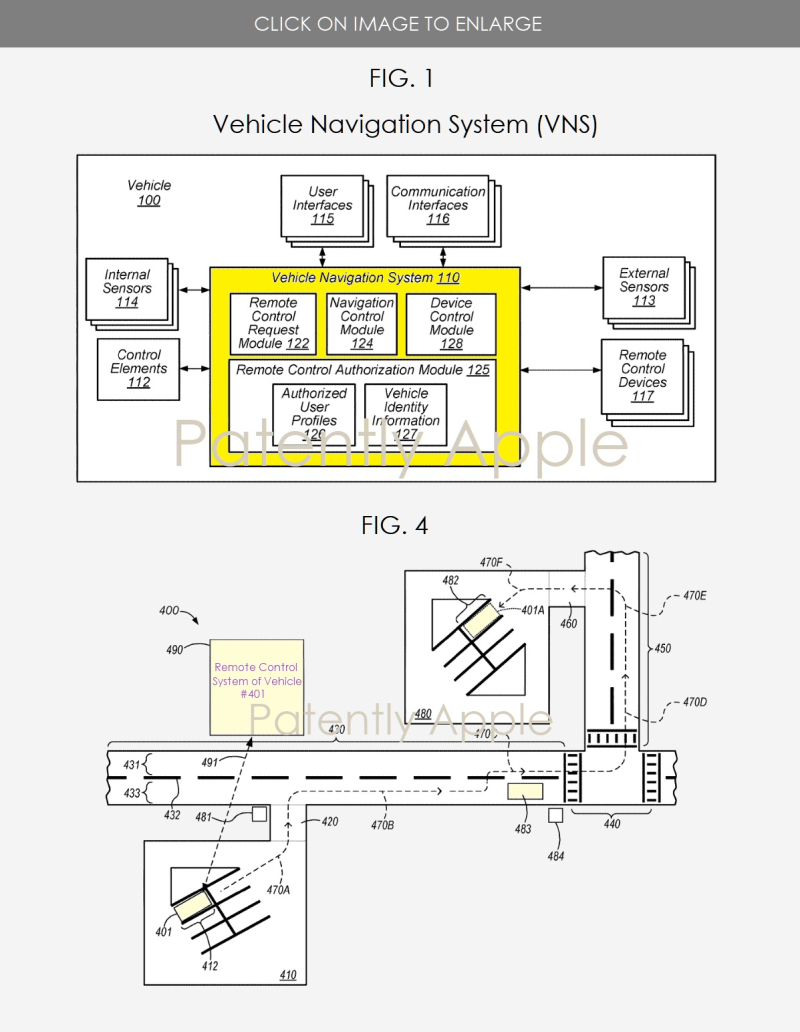 Apple's patent FIG. 4 above illustrates an overhead view of a stopped vehicle which includes an impaired occupant being autonomously navigated from a starting position to a selected driving destination location. The vehicle illustrated in FIG. 4 includes a "Vehicle Navigation System (VNS)."

This part of Apple's Project Titan is a powerful argument why adults will appreciate a vehicle with an autonomous capability. Imagine a driver suddenly experiencing chest pains and knows that they're in trouble. The driver could pull over and call 911. The stressed out driver could convey the emergency to an EMS service operator and request that they take control of their vehicle so as to drive them safely to the nearest hospital.

Apple's patent FIG. 4 above illustrates a vehicle being taken over remotely and is on a driving course to a destination, such as a hospital.

In theory, the autonomous system could also be used to drive an inebriated person home.