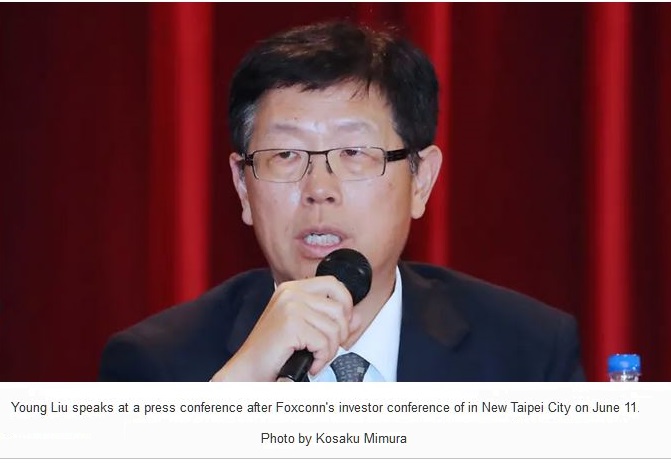 Today Apple sent a message to Wall Street through their leading manufacturer Apple supplier Foxconn that they have contingency plans in place should the China-US trade war escalate.

Foxconn warned of a deepening technology divide due to the bitter trade battle between Washington and Beijing, and signaled it was not only accelerating US manufacturing but ready to step up production of the iconic iPhone outside China if necessary.

The company revealed plans to widen the range of products at its $10 billion flagship U.S. factory in Wisconsin, elevating the strategic importance of the plant amid the escalating trade tensions.

Although Apple had not asked Foxconn to move production, the two companies were watching trade war developments closely, said the head of Foxconn's semiconductor business, Young Liu, at the first investor day in the company's 45 year history. Liu, who hosted the event, is widely expected to take over from founder and chairman Terry Gou later this month, as he makes a bid for Taiwan's presidency.

"If Apple has any supply chain diversification plans outside China, we have sufficient capacity to help it cope with its need for the U.S. market," he said.

Liu's comments indicate Foxconn is digging in for a protracted trade war, which has already dealt a blow to global growth expectations.

The Wisconsin project was crucial to Foxconn's ability to deal with the new order of "one world, two systems," Liu said. Under that vision, Foxconn is planning to greatly expand its Wisconsin plants to go far beyond just display panels and manufacture servers, networking products and automotive central controls.

The Nikkei Asian Review further noted that Liu said Foxconn and Apple, its biggest customer, were monitoring the U.S.-China trade discussions around the clock.

Foxconn was well placed to help Apple, Liu said, with 25% of its total production capacity outside China and production sites in 16 countries all over the world.

Meanwhile, Foxconn on Tuesday unveiled a nine-person operational committee, which includes four new board of directors and the key executives from Foxconn's business groups. The operational committee will hold weekly meetings to handle the company's day-to-day operations and propose decisions for the board to make, after Gou steps down from the chairmanship later this month.

As far back as December 2018 Patently Apple posted a report titled "Foxconn may Setup a Plant in Vietnam should the US-China Trade War Expand in the New Year." The report noted at the time that "Apple Inc’s biggest iPhone assembler, Foxconn, is still considering setting up a factory in Vietnam to mitigate any impact of an ongoing trade war between the United States and China, according to a Vietnamese state media report."

Clearly contingency plans are in place to ensure that Apple's key products don't experience any major disruption should China decide to use Apple as a sacrificial lamb in their war with the U.S.