Today the US Patent & Trademark Office published a patent application from Apple that relates to their second generation Apple Pencil that introduces a touch sensitive surface that could be tapped and have tools like an eraser made available to users. The patent places emphasis on the new deformation feedback surface of Apple Pencil 2 and the components that make the new functionality and features possible.

At one point, Apple's patent states "there is a need for electronic devices to include more sophisticated feedback mechanisms and components for providing user feedback that is responsive to the user's physical interaction with such electronic devices.

Such techniques and components may be beneficial to graphical artists drawing with an electronic stylus (Apple Pencil 2), where the digital representations of their graphical designs is heavily dependent upon the amount of tactile feedback that they receive during the drawing. 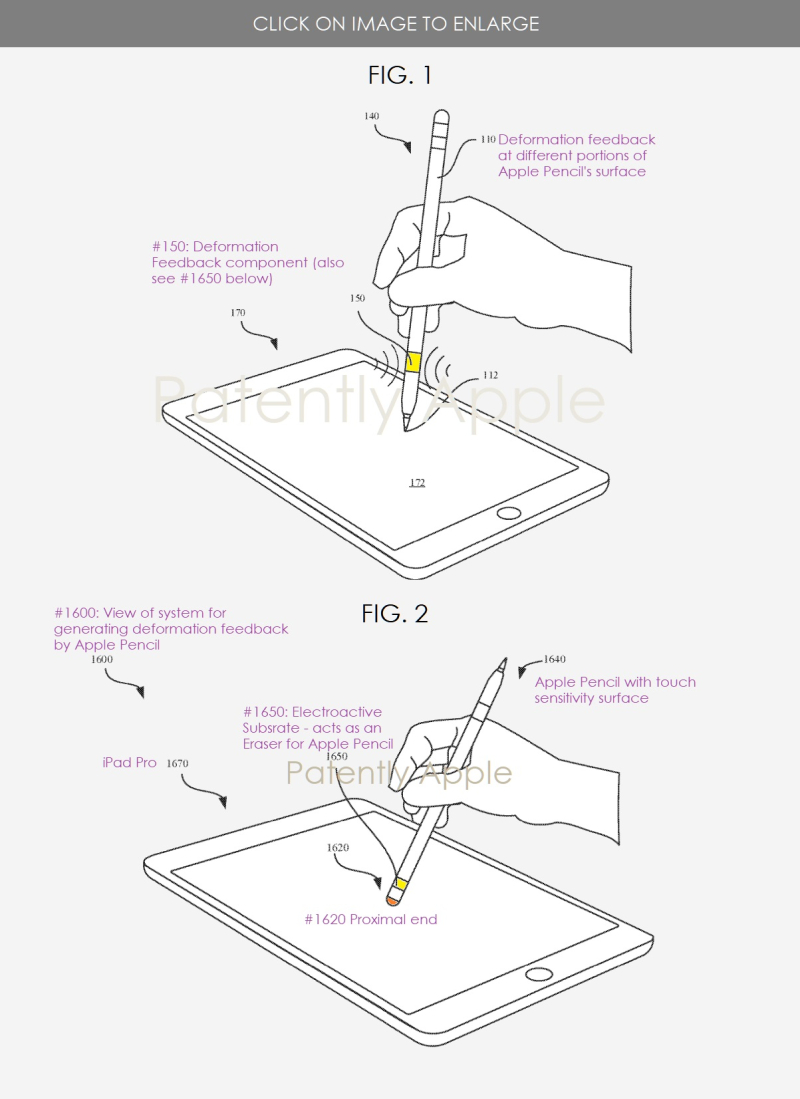 In Apple's patent FIG. 20 below we're able to see a system view of an exemplary list of feedback preferences associated with data items that can be executed by application #1920. In one example, the user can select "Media Tool Type" #2010, and choose #7 for eraser. 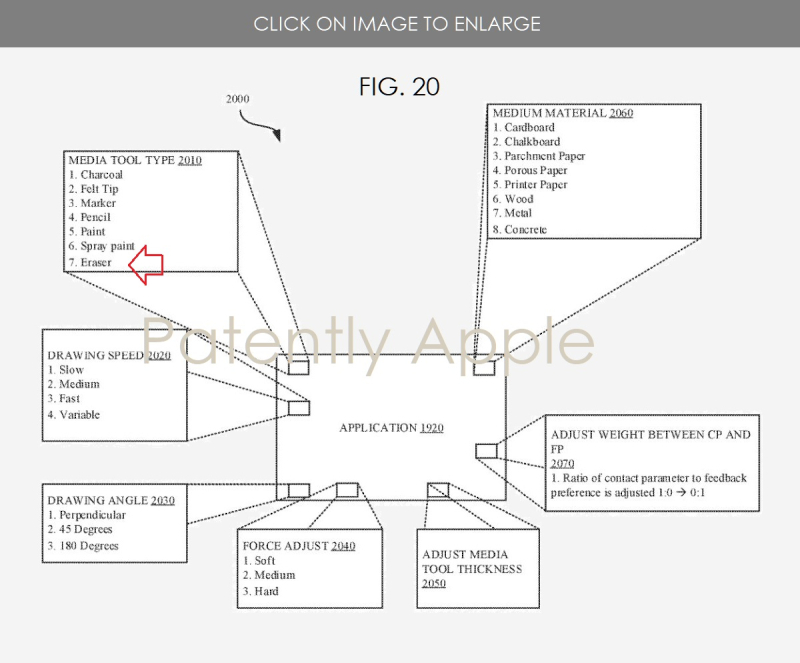 Technically this is a continuation patent. However, because we never covered this as a patent application or granted patent, our report illustrates some key points and patent figures about Apple's invention that covers Apple pencil 2.

As a continuation patent, we know that Apple has since updated their Apple Pencil 2 patent and those changes are always present in the patent claims alone.

In the original granted patent, the claims generically refer to Apple Pencil simply as "a device." In today's continuation patent Apple's claim #1 refers to the device as an "electronic pencil." The original patent emphasized the "distal tip" whereas today's patent now emphasizes stimulus originating from the walls of the exterior of Apple Pencil.

The original patent claims also emphasized "orientation" or "feedback" based on "the load path." Today's patent update emphasizes "direction of the force" on the walls of Apple Pencil.

The patent updated their claim related to a Method with emphasis on a feedback force component responding to the stimulus applied to the walls of Apple Pencil's housing.

Apple added an all new claim with the following verbiage: "An electronic accessory device for use with a touch sensitive portion of an electronic device, the electronic accessory device comprising: a housing capable of carrying operational components, the operational components including: a processor capable of providing operational instructions; a sensor coupled to the processor, wherein the sensor is capable of detecting a region of the housing that is exposed to a stimulus originating from a source external to the housing, and responding by (i) determining properties of the stimulus, and (ii) transmitting the properties of the stimulus to the processor; and a feedback component that is responsive to an instruction received from the processor, wherein the instruction causes the feedback component to selectively deform the region of the housing, and an amount of the deformation is based on the properties of the stimulus."