Back in February Patently Apple posted a report titled "Apple granted their Fifth Patent on Integrating Gas and other Environmental Sensors into Future iDevices and Macs." Apple now wants to take this project to the next level. Today the US Patent & Trademark Office published a patent application from Apple that relates to a possible future smart home wall mounted gas detection device.

In Apple's patent FIG. 1 below we're able to see an illustration of an exemplary trace gas detection system #110 that can include a display #112, laser #114, and detector #116. The laser can be configurably operable using any of the methods and waveforms discussed in Apple's patent filing. 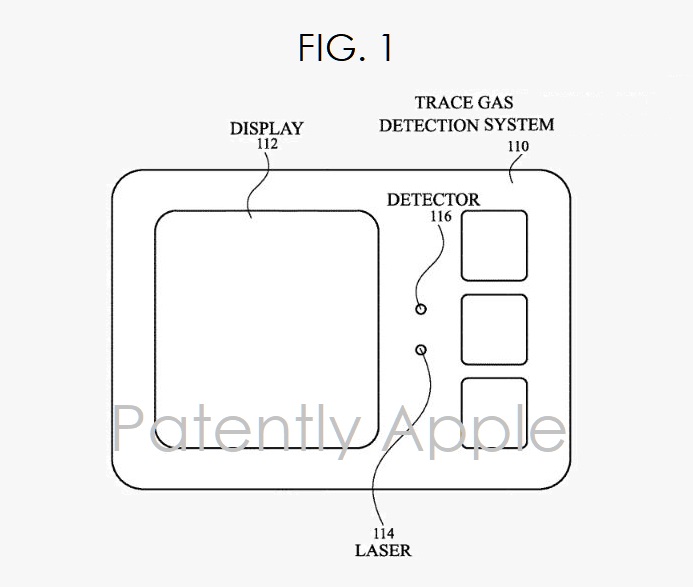 Although typically used in large, bulky systems, tunable semiconductor lasers can have many uses in portable electronic devices. For example, wall-mountable trace gas detection system #110 can be located in a user's garage and can be used to detect if the exhaust from an automobile parked in the garage exceeds a safe level.

The wall-mountable trace gas detection system can provide a warning on the display and additionally transmit the information to a mobile telephone. In response, the mobile telephone can warn the user of the hazard and can prevent the user from entering the garage.

Apple's patent application that was published today by the U.S. Patent Office was originally filed back in February 2019. Considering that this is a patent application, the timing of such a product to market is unknown at this time.

About Making Comments on our Site: Patently Apple reserves the right to post, dismiss or edit any comments. Those using abusive language or negative behavior will result in being blacklisted on Disqus 20190190233