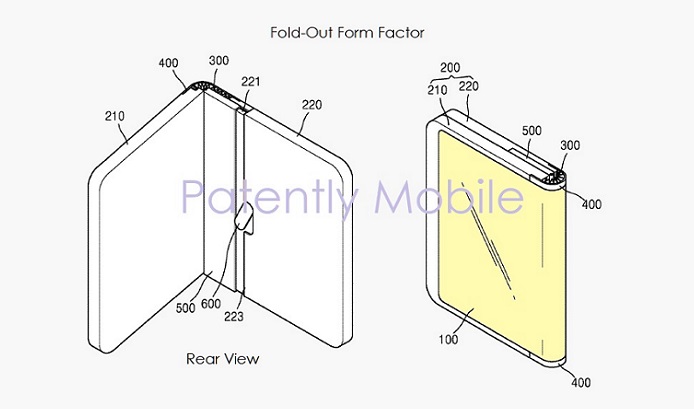 On May 24th Patently Apple reported that Best Buy cancelled their Samsung Galaxy Fold pre-orders as did AT&T on June 13th. While Samsung has yet to fix and relaunch their "Fold-In" styled Galaxy Fold phone as of yet, surprising news out of Korea today claims that Samsung is aiming to launch a second model later this summer that offers a "Fold-Out" form factor. Samsung wants to beat Huawei's delayed Mate X to market which is due in September.

A Korean tech report states today that Samsung Electronics is expected to soon release a wide range of foldable smartphones, including one that folds outward, according to industry insiders.

In fact, Samsung's executives have signaled that foldable smartphones will be the company's next secret weapon. During the Samsung Investors Forum on June 26, Lee Jong-min, senior vice president at Samsung’s mobile communication business, hinted at a varied lineup of foldable phones, adding that Samsung’s next-generation smartphones would be led by foldable devices.

The report further stated that an out-folding phone would come ahead of Huawei Technologies’ version of the foldable phone.

One of the publication's sources on the condition of anonymity stated that "The launch date has yet to be unveiled, but it’s likely to be earlier than the date set for Huawei. Samsung has already begun producing the outward folding phone."

One market analyst told the publication that "By getting ahead of Huawei and producing the first mass-produced out-folding smartphones, Samsung can claim another world title."

Adding to their report today was news from local media ET news that was published on Wednesday that Samsung had produced a prototype of an out-folding phone last year but decided at the last moment to push for an in-folding device instead. It will now push for various types of fordable phones -- both inward- and outward-folding phones as well as clamshell-like devices, which open and close vertically, as early as 2020, according to

Today's cover graphic above is from reports that were posted under both Patently Apple and Patently Mobile in May covering Samsung winning  a U.S. patent for a Fold-Out phone design.  Our Patently Mobile IP blog has archived many of Samsung's foldable device patents that also include clamshell-like devices and even scrollable form factors. Below are a few examples of Samsung patent figures from over the years. It's unknown at this time if today's tech report out of Korea took liberty of expanding on the statements made by Samsung's VP Lee Jong-min at yesterday's investor's forum.