On Saturday Apple's CEO Tim Cook gave the the commencement address at Tulane University. Below you'll find a video of Cook's full address. Cook talked about climate change which is one theme Apple is continually working on with Al Gore and Lisa Perez Jackson, an American chemical engineer who served as the Administrator of the United States Environmental Protection Agency from 2009 to 2013 and now holds the position of Vice President, Environment, Policy and Social Initiatives at Apple.

Beyond climate change, Cook told students, in a round about way, to respect freedom of speech and the views of others. Cook stated that "If you find yourself spending more time fighting than getting to work, stop and ask yourself who benefits from all the chaos.  There are some who would like you to believe that the only way that you can be strong is by bulldozing those who disagree or never giving them a chance to say their peace in the first place.  That the only way you can build your own accomplishments is by tearing down the other side.

We forget sometimes that our preexisting beliefs have their own force of gravity.  Today, certain algorithms pull toward you the things you already know, believe, or like, and they push away everything else.  Push back.  It shouldn't be this way.  But in 2019, opening your eyes and seeing things in a new way can be a revolutionary act. Summon the courage not just to hear but to listen."

Tim Cook's address begins at around the 3:24 mark of the video below. 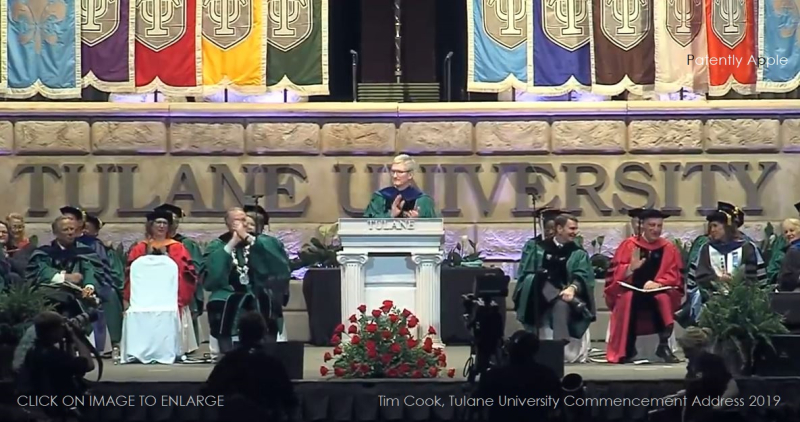