Home Archives Contact Us Subscribe Twitter MeWe Facebook Patently Mobile
Foxconn's Chairman tells U.S. President Construction on new Wisconsin Plant resumes this month & will open on Cue in 2020
A Federal Judge in Massachusetts Granted the AFT the Right to Force a Suspect to Open their iPhone via Touch ID 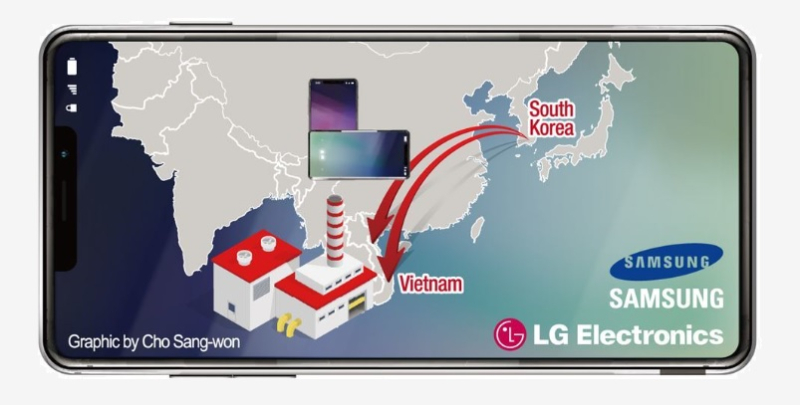 The heyday for Korea's once-bustling smartphone plants appears to have come to an end with both LG Electronics and Samsung Electronics either shutting down production lines or curtailing domestic output, according to Korean tech site report published today.

Smartphone makers are moving their local production lines to Vietnam and other countries where labor costs are lower. This has been brought on by increasing competition from Chinese smartphone makers such as Huawei and Xiaomi that have price competitiveness.

In order to sell smartphones cheaper so as to retain their customer base and win new customers, LG needed to look to Vietnam where the monthly minimum wage is currently at between $126 to $180, according to Vietnam's National Wage Council.

An LG official commented that "The decision to move the smartphone production line to Vietnam has been made to promote improvement in profitability and raise our global competitiveness amid stagnation in the global smartphone market."

Currently Samsung reportedly produces almost half of its entire smartphones in Vietnam.  Unlike LG, Samsung also plans to build additional factories in India, seeking to increase smartphone production there.

Those moves are apparently aimed at cutting costs amid comparatively high labor costs in Korea and an increase in the prices of components.