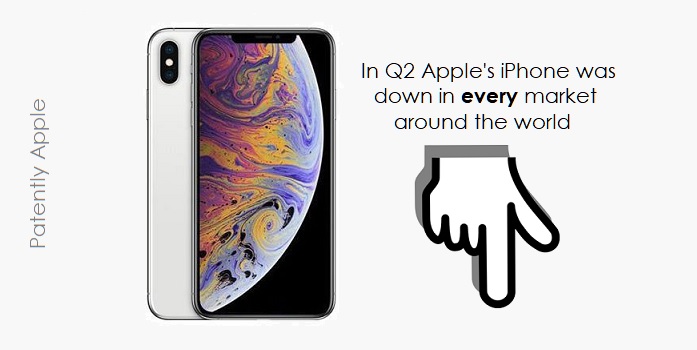 Apple has published their Form 10-Q that was submitted to the US Securities and Exchange Commission for fiscal Q2 2019. In this report we narrowly cover Apple's statement regarding iPhone and their current legal proceedings.

On Tuesday's opening statement regarding fiscal Q2 2019 Financials, Apple CEO stated the following in-part about the March Quarter: For iPhone, while our worldwide revenue was down 17% from a year ago, declines were significantly smaller in the final weeks of the March quarter. We like the direction we're headed with iPhone and our goal now is to pick up the pace."

Looking at Apple's recently filed Form 10-Q document with the Securities and Exchange Commission, Apple's commentary about the iPhone was more direct and honest about Apple's real performance for the Quarter without any marketing babble about the future.

Below are statements made by Apple in-part, focused on iPhone:

iPhone: "iPhone net sales decreased during the second quarter and first six months of 2019 compared to the same periods in 2018 due primarily to lower iPhone unit sales in all the reportable geographic segments."

For the Americas, Apple states in-part that "net sales increased during the second quarter and first six months of 2019 compared to the same periods in 2018 due primarily to higher Services and Wearables, Home and Accessories net sales, partially offset by lower iPhone net sales."

For Europe, Apple notes that "Europe net sales decreased during the second quarter and first six months of 2019 compared to the same periods in 2018 due primarily to lower iPhone net sales.

For Greater China, Apple states in-part that "Greater China net sales decreased during the secondquarter and first six months of 2019 compared to the same periods in 2018, driven by lower iPhone net sales.

For China, Apple states in-part that "Japan net sales during the second quarter of 2019 were relatively flat compared to the same quarter in 2018, as higher Services and iPad net sales were primarily offset by lower iPhone net sales.

Not a single positive note was made for iPhone in any geographic market segment that Apple serves.

Under the header "The Company could be impacted by unfavorable results of legal proceedings,such as being found to have infringed on intellectual property rights," Apple states in-part:

The outcome of litigation is inherently uncertain.If one or more legal matters were resolved against the Company or an indemnified third party in a reporting period for amounts in excess of management’s expectations, the Company’s financial condition and operating results for that reporting period could be materially adversely affected." A few of the cases that Apple highlights include the following:

On January 20, 2017, the Company filed a lawsuit against Qualcomm Incorporated and affiliated parties (“Qualcomm”) in the U.S.District Court for the Southern District of California seeking, among other things, to enjoin Qualcomm from requiring the Company to pay royalties at the rate demanded by Qualcomm. No Qualcomm-related royalty payments had been remitted by the Company to its contract manufacturers since the beginning of the second quarter of 2017. Following the Company’s lawsuit, Qualcomm filed patent infringement suits against the Company and its affiliates in the U.S.and various international jurisdictions, some of which sought to enjoin the sale of certain of the Company’s products in particular countries. On April 16, 2019, the Company and Qualcomm reached a settlement agreement to dismiss all litigation between the two companies worldwide.The companies also reached a multi-year license agreement and a multi-year supply agreement.Under the terms of the settlement agreement, Apple will make a payment to Qualcomm to, among other things, resolve disputes over the withheld royalty payments.

Various civil litigation matters have been filed in state and federal courts in the U.S.and in various international jurisdictions alleging violation of consumer protection laws, fraud, computer intrusion and other causes of action related to the Company’s performance management feature used in its iPhone operating systems, introduced to certain iPhones in iOS updates 10.2.1 and 11.2.The claims seek monetary damages and other non-monetary relief.On April 5, 2018, several U.S.federal actions were consolidated through a Multidistrict Litigation process into a single action in the U.S.District Court for the Northern District of California. In addition to civil litigation, the Company is also responding to governmental investigations and requests for information relating to the performance management feature. The Company believes that its iPhones were not defective, that the performance management feature introduced with iOS updates 10.2.1 and 11.2 was intended to, and did, improve customers’ user experience, and that the Company did not make any misleading statements or fail to disclose any material information. The Company has accrued its best estimate for the ultimate resolution of these matters.

Lastly, Apple's Form 10-Q also noted that "Payments made in connection with business acquisitions, net, $291 million for Q2 2019 compared to $305 million in Q2 2018." No details were provided as to what companies were acquired.