The U.S. Patent and Trademark Office officially published a series of 85 newly granted patents for Apple Inc. today. In this particular report we cover three patents covering various attributes of a possible future Head-Mounted Display (HMD) system. Our fourth patent focuses on Apple branded over-ear headphones that will use an optical proximity sensor system specifically with transreflective optical sensors. According to a 2018 Bloomberg report, Apple branded over-ear headphones will launch sometime in 2019, so everything that we can learn about Apple's next major music accessory the better.

While Apple has been working on various kinds of headsets including a futurist design recently revealed in a number of patent application reports (one, two and three), there's been one design with a consistent theme of inserting an iPhone into the headset acting as its video display. The original patent for this style of head mounted display (HMD) was covered by us in 2010 or 9 years ago. Since that time we've kept on top of many of the updates including two published in 2016 (one and two).

While all three patents carry the very same title, they in fact carry different patent claims that contribute to the one invention. The '036 patent generally covers the HMD using its own built-in speakers and not that of an iPhone; the '037 patent covers smartglasses where the display is opaque and possibly used with AR imagery; and the '038 patent covers the HMD system being able to function in two modes, one with iPhone and one without iPhone.

All three HMD patents were filed at different times throughout 2017 and published today by the USPTO.

On Sunday Patently Apple posted a report titled "A Major Apple Headphone Patent in Europe points to Touch Inputs and a Collapsible Design to fit a Carrying Case." Two days later and Apple has been granted a new over-ear headphones patent relating to the use of transreflective optical sensors.

The patent oddly doesn't provide a patent application number as if it went from being a filing and ending up a granted patent.

Control circuitry in an electronic device can use the transreflective optical proximity sensor system to detect objects in an object detection region formed where a light-emitting region associated with a light emitter and a light-detecting region associated with a light detector overlap. During operation, the control circuitry can stop audio playback or take other suitable action in response to output from the transreflective optical proximity sensor. 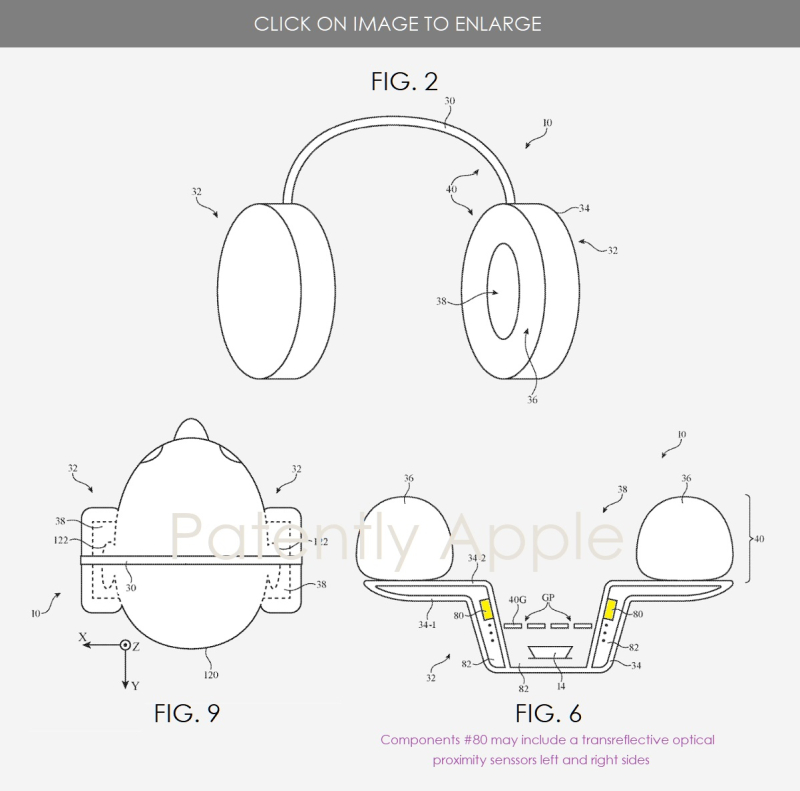 Apple's newly granted patent 10,306,350 on July 23, 2018 and published today by the U.S. Patent and Trademark Office as a granted patent. Other over-ear patents could be reviewed in our Audio Archives. This category of headphones has been active since Q4 2018.

Some of the Inventors of this Granted Patent