France is First to Introduce a new Digital 'GAFA Tax' (Google, Apple, Facebook and Amazon Tax) with the EU to Follow 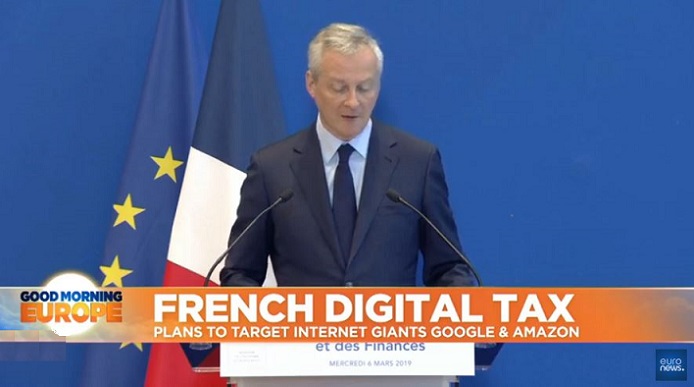 Lawmakers in France’s National Assembly, France’s lower house of Parliament, will on Monday begin debating a draft national GAFA tax law. They've dubbed it the GAFA tax, which is an acronym of the US companies it targets: Google, Apple, Facebook and Amazon. The bill proposes a 3 percent tax on digital advertising and other revenues of tech firms with worldwide revenues of more than 750 million euros ($842 million).

Reading the Euronews report it would appear that France seems to want to take credit for the "GAFA" tax as French Finance Minister Bruno Le Maire has unveiled plans for France's new tax on digital giants, calling it a "tax of the 21st Century."

The French Economy Ministry said it believed the tax would raise €500 million per year.

Le Maire told reporters on Wednesday that by "building the tax of the 21st Century," he hoped it would "restore fiscal justice."

While the tax will only apply to France, he said he would continue to campaign to develop it internationally.

In a statement sent to Euronews, a Google spokesperson said: "We always pay all of the taxes due and comply with the tax laws in every country we operate in around the world. Google pays the vast majority of its corporate income tax in the United States, and we have paid a global effective tax rate of 23% over the last ten years."

The Guardian reports that "The tax will be introduced whatever happens on 1 January and it will be for the whole of 2019 for an amount that we estimate at €500m," Le Maire told a press conference in Paris. To clarify, it's retroactive to January 1st 2019.

Spain and Italy are also working on national versions of a digital tax, as are Singapore and India.

An official response from Apple has yet to emerge.

While France's Finance Minister made their announcement independently, wishing to take leadership on this front, the EU held their own meeting to make a similar announcement. It's being reported by several sources today that "There is still disagreement among EU members over how to implement a so-called "GAFA tax" which is an acronym of the US companies it targets: - named after Google, Apple, Facebook and Amazon - to ensure the global internet giants pay a fair share of taxes on their massive business operations in Europe.

France has been driving hard for such a tax and made it official over the weekend. Yet a at a meeting of EU finance ministers over the weekend, Sweden, Finland, Ireland and Denmark blocked a draft EU-wide GAFA tax proposal, officials said.

“We are becoming an increasingly digital world and it will be a huge problem if we do not find a way to raise (digital) taxes,” Vestager told France Inter radio.

“The best thing is a global solution. But if we want to obtain results in a reasonable period of time, Europe must take the lead,” the commissioner added.