Foxconn's Terry Gou Stated during an Event at the U.S. Embassy in Taiwan that he may run for President of Taiwan 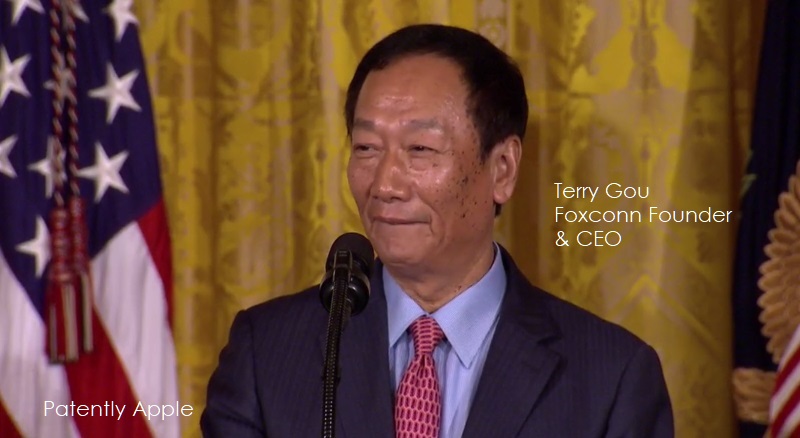 It appears that working with President Trump in 2017 on a plan to open a major plant in Wisconsin has inspired Terry Gou to think bigger and run for President of Taiwan.

Bloomberg reports today that "Billionaire Foxconn founder Terry Gou said he was considering a run for Taiwan’s presidency, adding a powerful symbol of Chinese business ties to the field of potential challengers against the island’s leader.

Gou, who amassed a personal fortune of about $4.4 billion building iPhones on the mainland, said on the sidelines of a security forum in Taipei that he was weighing a bid to oust Taiwanese President Tsai Ing-wen. He would seek the nomination of the China-friendly Kuomintang, or Nationalist Party, should he choose to run, he said.

"If I am to make a decision, I will participate in the KMT primary," Gou, 68, said Tuesday at the event hosted by the American Institute in Taiwan -- the U.S.’s de facto embassy -- and Taiwan’s foreign ministry. The opposition KMT, which has controlled Taiwan for all but 11 years since World War II, was expected to choose a candidate in the coming weeks.

Reuters added the Gou said: "I didn’t sleep last night ... 2020 is key for Taiwan. The reason for the tense situation (with China) is because it’s a turning point for Taiwan’s direction for politics, economy, defense for the next 20 years."

Gou added with tears welling up in his eyes: "So I asked myself the whole night ... I need to ask myself what I can do. What I can do for the youth? ... The next 20 years will decide their fate."

The KMT said in a statement Gou had been a party member for more than 50 years and had given it an interest-free loan of T$45 million ($1.5 million) in 2016 under the name of his mother, a move that signaled his “loyalty” to the party.