Home Archives Contact Us Subscribe Twitter MeWe Facebook Patently Mobile
Apple Files for "Apple Trade In" Trademark in Europe
Prior to the Apple-Qualcomm Deal, Apple was rumored to be in talks to Acquire Intel's 5G Modem Division

Semiconductor giant Foxconn, that ranked 24th on the Fortune Global 500 list in 2018, is building a manufacturing base in southwestern China’s Chengdu to produce wearable devices. The original Chinese report coined it "smartwear." Foxconn’s factory is on track to open in September, a city government spokesperson said – even though the deal was only signed yesterday.

If Foxconn were to get the contract for Apple's future Headset or smartglasses, for instance, the new plant is where they would be manufactured. And with Huawei working with South Korea's Gentle Monster fashion brand to introduce one of the first realistic looking smartglasses later this year, hopefully Apple won't be too late to the party.

China sets up these economic zone's so that suppliers of a particular set of products are located in one Zone to make it easier to keep production of end-user products at maximum levels to meet demanding schedules.

Foxconn's new smartwear base is expected to have an area of around a million square meters. The report notes that this isn't Foxconn’s first project in Chengdu. The company set up factories back in Chengdu in 2010 to produce tablets and personal computer components. In 2018, Foxconn’s Chengdu factories contributed a total revenue of over 100 billion yuan ($14.84 billion) to the company.

While Foxconn is currently engaged in R&D and manufacturing of 3C products (Computer, Communication and Consumer electronics), China's next push is into wearable devices to expand growth.

The report adds that "China's wearable device industry market prospects and investment strategy planning analysis report" pointed out that "in 2019, global smart device shipments will reach 136 million. After the smart phone, wearable smart devices are gradually becoming one of the next new growth areas."

The project is aimed at the manufacture of smart wearable devices and will promote Chengdu's further participation in the global electronic information industry division of labor. The Zone will promote the transformation and upgrading of traditional manufacturing to intelligent manufacturing

Earlier today Patently Apple also learned that BOE is planning to start construction of its fourth 6th generation flexible OLED plant soon in Chengdu. It is hoping to secure monthly production capacity of 48,000 panels by investing $6.91 billion (7.9 trillion KRW). Although display market has been stagnant and demands for flexible OLEDs for Smartphones have not met initial expectation, BOE is being more aggressive in its investments and is speeding up the process of increasing its production capacity.

BOE is a supplier of foldable OLED displays and Huawei's upcoming Mate X will use their displays. 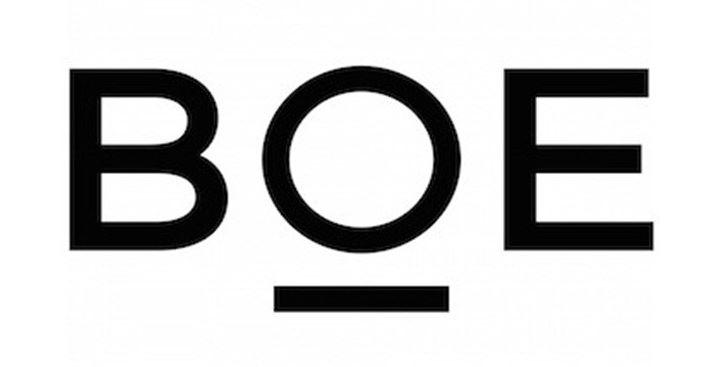 By investing into B15 plant, it has become certain that BOE will have the highest production capacity of 6th generation flexible OLED by surpassing Samsung Display.

Patently Apple reported on one of the first Rumors that BOE would enter Apple's supply chain began back in October 2017. The rumor panned out as BOE was listed on Apple's Official 2018 Supplier List (page 4).