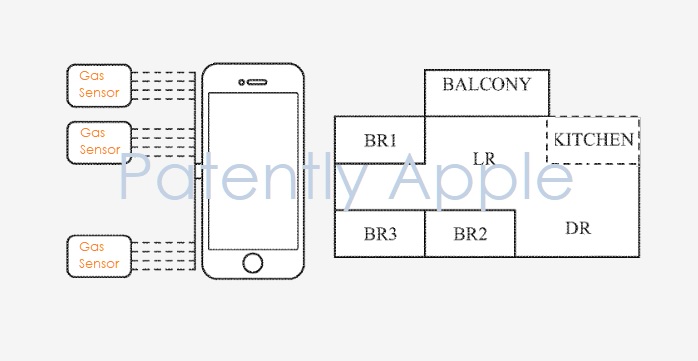 In January Patently Apple posted a report titled "One of Apple's Next Health Sensors for iDevices could save your Life by Detecting Invisible Deadly Gases." In February we posted another report on this subject matter titled "Apple granted their Fifth Patent on Integrating Gas and other Environmental Sensors into Future iDevices and Macs." Today the US Patent & Trademark Office published a patent application from Apple that relates to integrating a series of enhanced miniature gas sensors in future iPhones that will be able to detect gas readings in various rooms in your home.

Indoor and outdoor environments typically differ by their air compositions and concentrations, which can be captured by gas sensors and potentially used for indoor-outdoor (I-O) detection. Single gas composition and/or concentration or multi-gas identification could be used. One particular example is tropospheric ozone (O.sub.3) gas, the ground level of which is usually formed outdoors, by photochemical and chemical reactions between nitrogen oxides (NOx) and volatile organic compounds (VOCs) in the presence of sunlight. Ozone naturally breaks down in indoor environments, especially on surfaces where unsaturated carbon-carbon bonds are present, which results in a lower ozone concentration indoors than outdoors.

In one or more aspects of Apple's invention, the subject technology is directed to enhanced location detection using gas and/or particulate matter sensors integrated in electronic devices such as an iPhone and Apple Watch.

It is understood that integration of miniature gas and/or particulate matter sensors into consumer electronic platforms is valuable as it could enable new features such as environmental, health monitoring and other various features. In particular, integration of one or more miniature sensors with a consumer electronic platform such as a portable communication device can enhance location detection accuracy of the device. This enables the device to more accurately distinguish a transition between indoor and outdoor based on detected transition in concentration of a signature gas, for example, ozone (O.sub.3) or carbon dioxide (CO.sub.2) or based on composition difference of indoor and outdoor gases or particulate matter.

A processor coupled to the miniature sensors can determine a sensor signal transition when a user of the device moves the device from indoor to outdoor or from one location in a building to another location.

Apple's patent FIG. 1 below is a schematic diagram illustrating an example of portable communication devices #100 (iPhone) and #110 (Apple Watch) with enhanced location detection capability, in accordance with one or more aspects of the subject technology.

In some implementations, one or more of the sensors can be ozone (O.sub.3) sensors, carbon dioxide (CO.sub.2) sensors or sensors of other gases that may be associated with various neighboring locations.

In some implementations, the sensor can be a multi-pixel gas sensor, for example formed of an array of gas sensors, each of which can be sensitive to a particular gas. 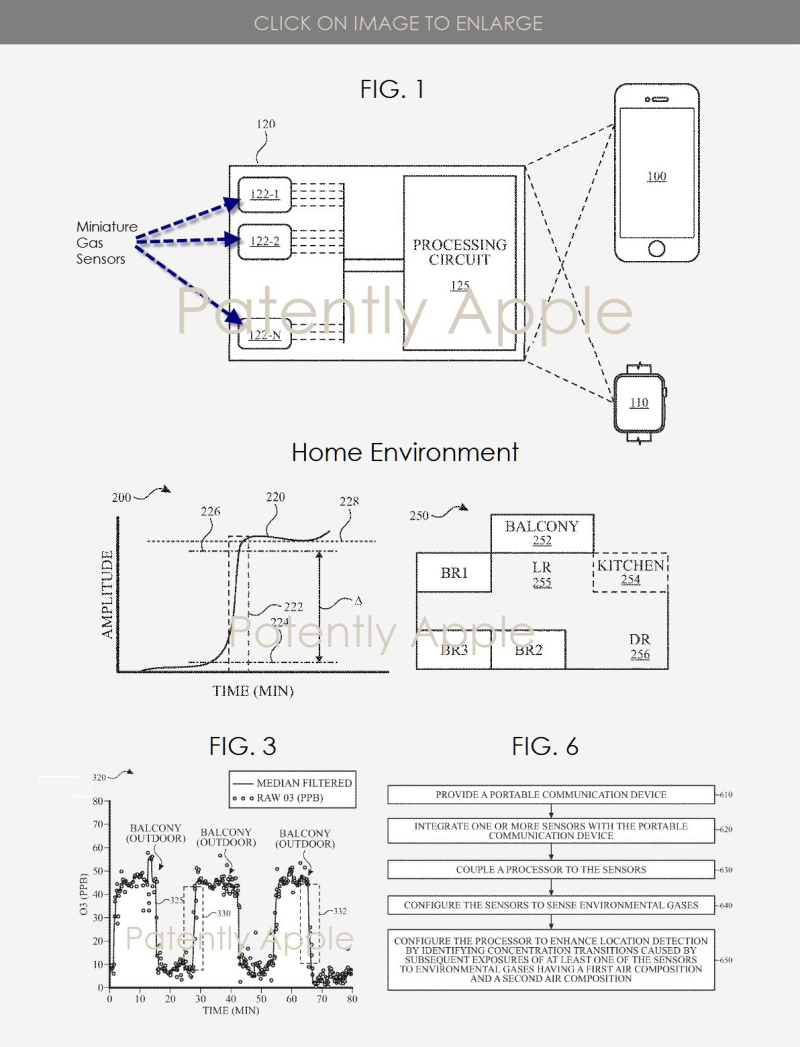 In Apple's patent FIG. 2 above, we're able to see a chart and a schematic diagram illustrating an example sensor signal transition #222 used to enhance location detection.

The sensor signal transition can be due to a change of concentration of a signature gas or due to a change in air composition that the sensor is exposed to. For example, if the sensor is an ozone sensor and the user of the host device moves the host device from indoor (e.g., a space in the building #250, such as the living room (LR) #255) to outdoor (e.g., balcony #252), the ozone signal (e.g., #220) shows the sensor signal transition which is an indication of a change in concentration of ozone gas.

In some aspects, other gases such as carbon dioxide can be a signature gas for detecting indoor-outdoor (I-O) transition or transition from the living room or dining room to a bedroom (e.g., BR1). In one or more aspects, the change in air composition in a first location (e.g., kitchen #254) may be different from the air composition in a bedroom (e.g., BR1, BR2, or BR3).

This can result in a transition in sensors response when data from a number of sensors are analyzed. For example, air composition percentages of at least one of the different gases that different sensors are sensitive to a change in a location of the host device from a first location to a second location, which can cause a transition in a combined sensor signals. There may be different ways that signals from multiple sensors can be combined to result in a stronger signal transition.

Apple's patent FIG. 6 above is a flow diagram illustrating an example method of providing an iDevice with enhanced location detection capability.

Apple's patent application 20190120806 that was published today by the U.S. Patent Office was originally filed back in Q3 2018. Considering that this is a patent application, the timing of such a product to market is unknown at this time.

01: This Colorless, Odorless Gas Can Kill Within Minutes – and It Could Be Inside Your Home

02: Lake Nyos in Africa Suffocated Over 1,746 People in a Single Night

03: Invisible carbon monoxide can kill before you know what’s happening