Home Archives Contact Us Subscribe Twitter Facebook Patently Mobile
For Q1 2019 Apple's iPhone XR was #1 in the U.S. & Britain while the iPhone X was Apple's best Seller in Urban China
Foxconn's Terry Gou Stated during an Event at the U.S. Embassy in Taiwan that he may run for President of Taiwan

In review, Apple continued to lead the global premium smartphone segment in 2018 by capturing more than half of the market in spite of one weaker quarter that got all of the headlines. The segment grew faster than the global smartphone market, according to a new Counterpoint Research report.

The segment grew 14% year-on-year (YoY) in terms of sell-in and 18% YoY in terms of sell-through. Growth was driven by new iPhones and launches in a premium segment from Chinese OEMs like Huawei, OPPO, OnePlus.

While competition is increasing competition in the premium segment with close to 40 OEMs now competing in this space, the top five players account for almost 90% of shipments. Premium segment contributed to one-fourth (22%) of the global smartphone shipments in 2018.

Apple remained the market leader capturing 51% share of the premium segment, a significant lead over its nearest competitor Samsung which had a 22% share. 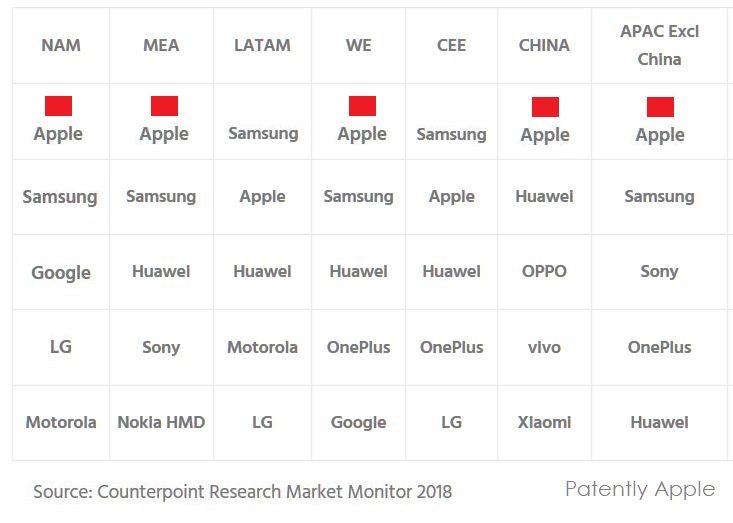 In terms of regions, APAC was the fastest growing region for the premium segment with a growth of 27% YoY. Huawei, OPPO, Vivo, and Xiaomi’s performance in China drove this growth. In terms of countries, China and the US alone contributed to more than half of the global premium market shipments. China’s premium segment grew 37% YoY while the US grew 10% YoY. Other countries where the premium segment grew fast include Indonesia (+54%), Russia (+28%), Canada (22%), Mexico (22%), Thailand (+20%), India (+14%), Brazil (13%), and Japan (10%).

Counterpoint considers premium smartphones to be priced $US400 and higher.