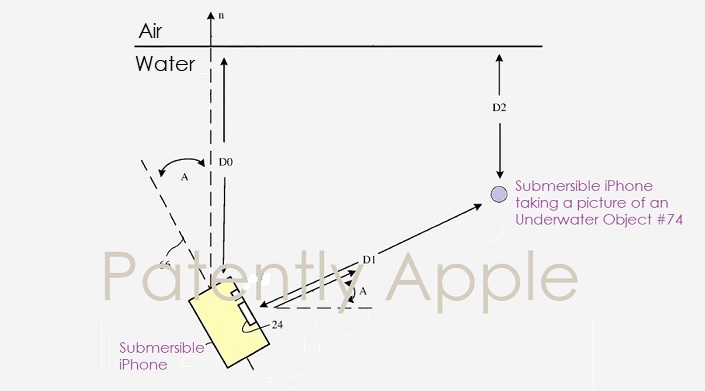 Today the US Patent & Trademark Office published a patent application from Apple relating to a future submersible iPhone that could take pictures at a depth between 90 to 140 feet of water.

Electronic devices are sometimes provided with image sensors. In a device such as a submersible camera, ambient light color is influenced by the presence of the water surrounding the camera. If care is not taken, images captured with a submersible camera may have an undesired greenish color cast.

Apple's invention covers a submersible electronic device such as a waterproof iPhone that may be provided with an image sensor. The image sensor may capture images of underwater objects.

The spectral absorption of water tends to turn underwater ambient lighting conditions greenish. Control circuitry in the submersible electronic device can perform color balancing operations and take other actions to compensate for this change in ambient lighting.

A schematic diagram of an illustrative submersible iPhone with an image sensor is shown in FIG. 1. The iPhone (electronic device #10), which may sometimes be referred to as an underwater device or waterproof device, may be sufficiently watertight to be used for capturing still and moving images of underwater scenes. 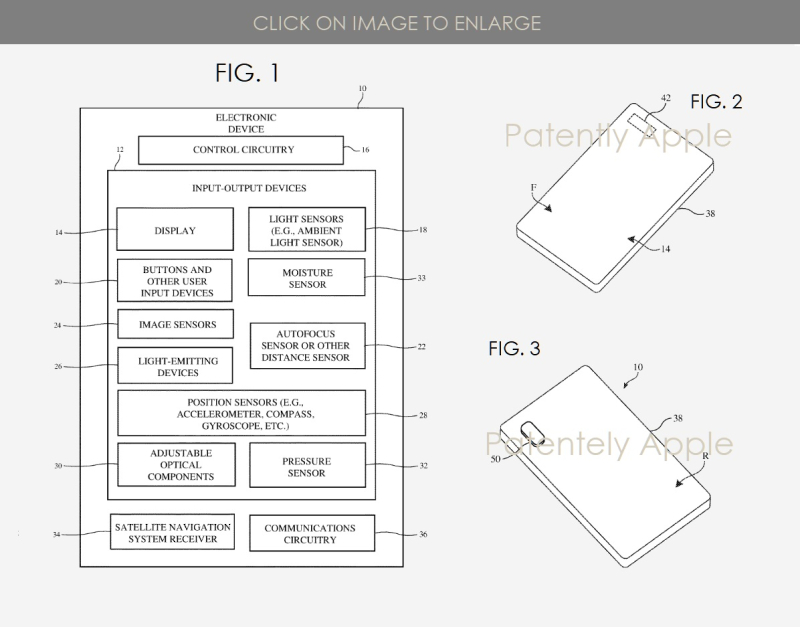 Light-emitting devices #26 of FIG. 1 may include light-emitting diodes, lasers, and/or other sources of illumination that help correct the color of images acquired under water. For example, the iPhone may have a red light source such as a red light-emitting diode or laser that is used to help illuminate objects underwater. In underwater conditions, red ambient light levels are relatively low, so providing supplemental red illumination may help achieve a desired color balance or a desired signal-to-noise ratio for each channel.

Apple's patent FIGS. 2 and 3 above are, respectively, front and rear perspective views of an illustrative iPhone with a housing  that may be formed of plastic, glass, ceramics, fiber composites, metal (e.g., stainless steel, aluminum, etc.), other suitable materials, or a combination of any two or more of these materials. Housing #38 may be formed using a unibody configuration in which some or all of the housing is machined or molded as a single structure.  The housing is designed to prevent water from intruding into the interior of the iPhone which may be referred to as an underwater device, submersible device, or waterproof device.

Apple's patent FIG. 8 below is a diagram showing how a geometrical model may be used in assessing the impact of water on the color of images acquired by a submersible iPhone.

The submersible iPhone has a camera with a lens and image sensor for capturing images of an external underwater object such as object #74. Light-emitting devices (#26) may include a white light camera flash, a supplemental red-light illumination source, and other light sources. In addition to image sensor (#24) and light sources on the iPhone may include a pressure sensor, an orientation sensor, and the other components of FIG. 1. 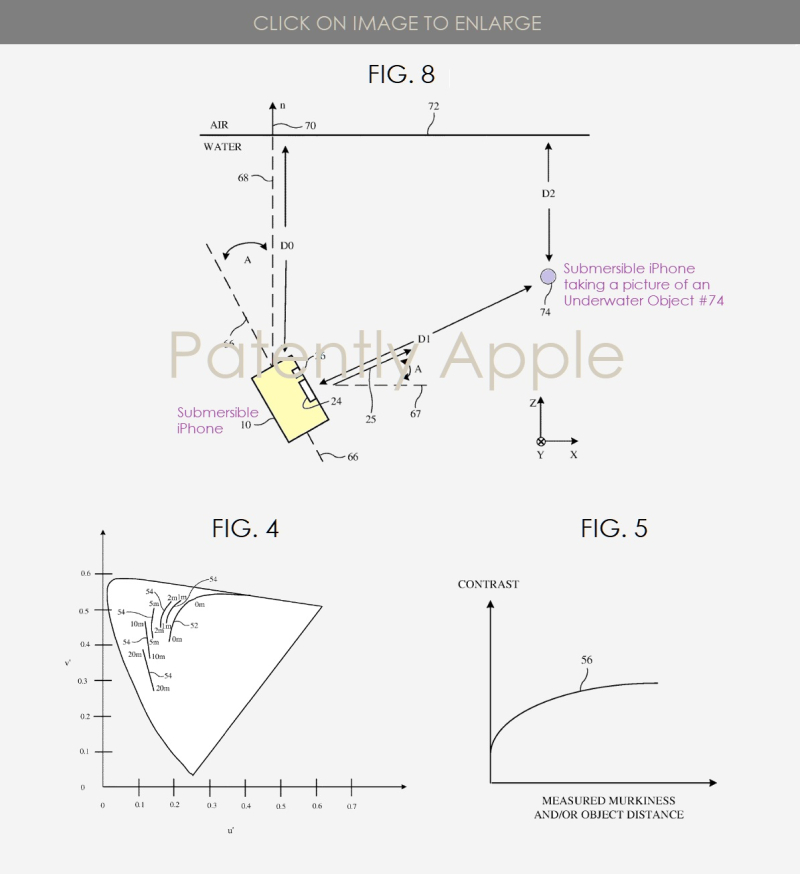 Apple's patent FIG. 4 above is a chromaticity diagram showing illustrative Planckian Loci associated with different depths underwater; FIG. 5 is a diagram of illustrative contrast levels that may be established as a function of measured depth underwater and image-sensor-to-object distance.

While device 10 is mainly covered as a future iPhone, like all patents, Apple ensures to state that the invention may apply to a wide range of devices including an iPad, Apple Watch, smartglasses, a miniature wearable device, a digital camera and more.