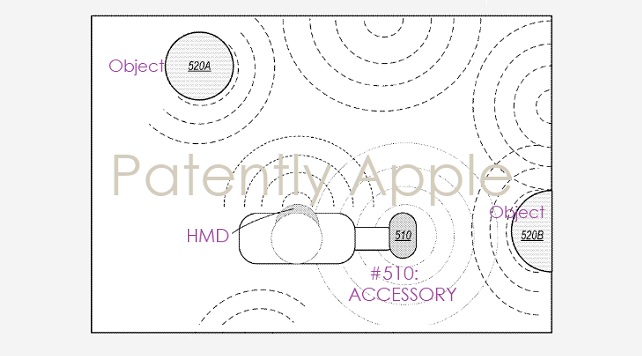 Today the US Patent & Trademark Office published a patent application from Apple relating to methods and systems behind a new handheld range finding controller for Apple's future mixed reality headset.

Head-mounted displays (HMDs), for example helmets, goggles, or glasses, may be used in a variety of applications including but not limited to virtual reality (VR) and mixed reality (MR) systems. Virtual reality (VR) allows users to experience and/or interact with an immersive artificial environment, such that the user feels as if they were physically in that environment. For example, virtual reality systems may display stereoscopic scenes to users in order to create an illusion of depth, and a computer may adjust the scene content in real-time to provide the illusion of the user moving within the scene. When the user views images through a virtual reality system, the user may thus feel as if they are moving within the scenes from a first-person point of view.

Apple's invention covers methods and an apparatus for range finding in virtual reality (VR) and mixed reality (MR) systems. Embodiments of range finding methods and apparatus may, for example, be implemented by VR/MR systems that include a head-mounted display (HMD) such as a helmet, goggles, or glasses, and an accessory that the user is holding or wearing (e.g., a hand-held device such as a controller for the HMD or a mobile multipurpose device).

In embodiments, range finding sensors (e.g., transmitters and receivers (or transceivers), for example ultrasonic transducers), may be included on the HMD and on the accessory and used to track distances to and relative position of walls, objects, and other obstacles within constrained physical environments such as rooms, gyms, yards, or fields, or in unconstrained physical environments.

Range finding information from the sensors on the HMD and accessory can be used to generate a 3D map of the user's environment that can be used for various purposes in the VR/MR system. In addition to mapping the user's environment, embodiments of the range finding methods and apparatus may also be used to track the relative position of the accessory with respect to the HMD.

Apple's patent FIG. 1 below illustrates an example virtual reality (VR) or mixed reality (MR) system that includes a head-mounted display (HMD) and accessory that include ultrasonic sensors for mapping the user's environment. 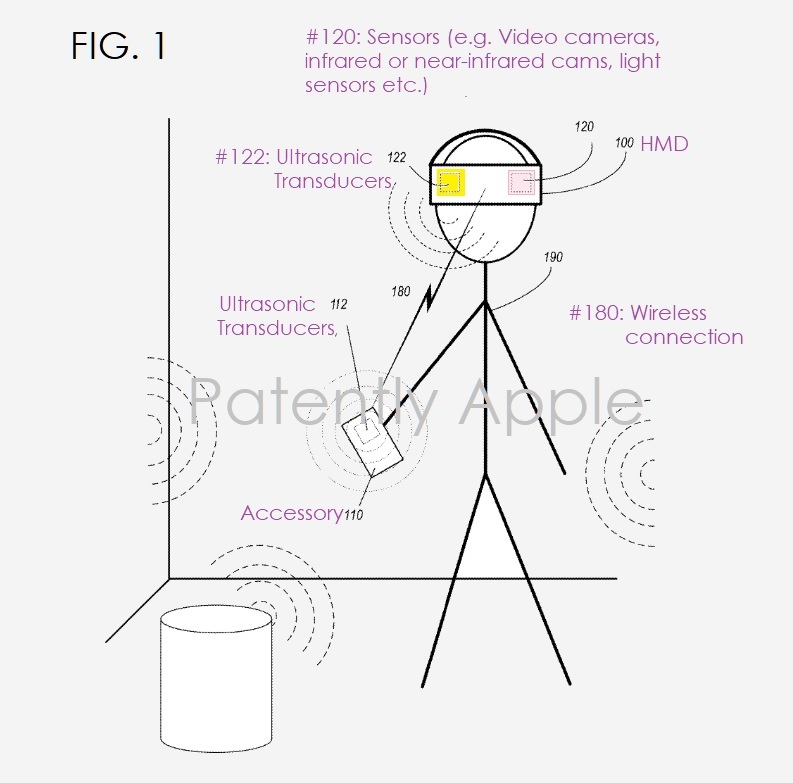 Apple's patent FIG. 2 below illustrates an example VR/MR system that includes ultrasonic sensors on the HMD and accessory that are used to track relative position of the accessory to the HMD. 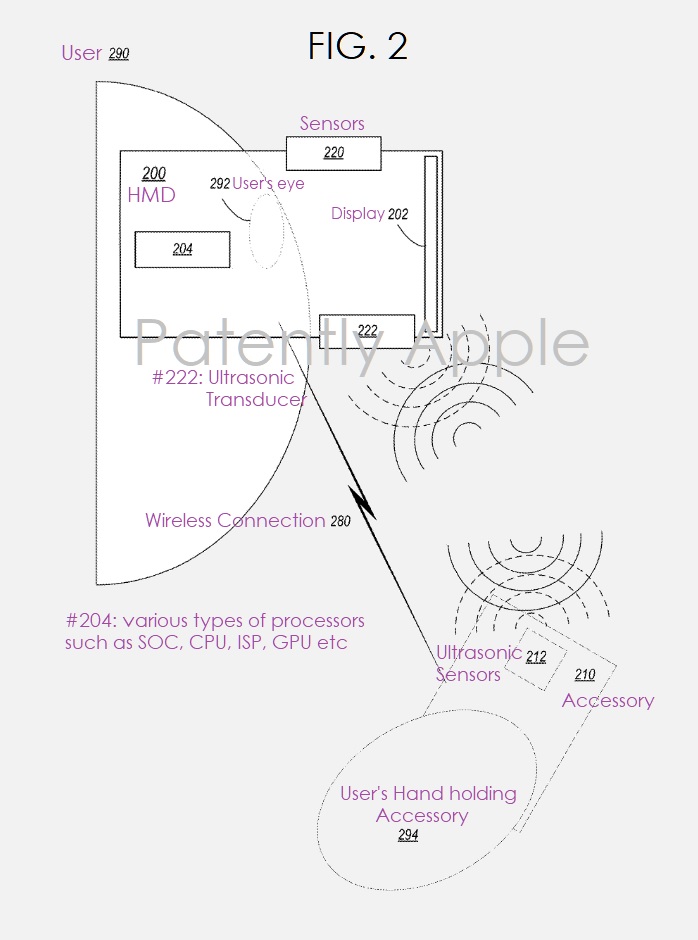 Apple's patent FIG. 5 below illustrates mapping a real-world environment using ultrasonics in an example VR/MR system; FIG. 9 is a high-level flowchart of a method for detecting potential collisions in a VR/MR system as illustrated in patent FIG. 1. 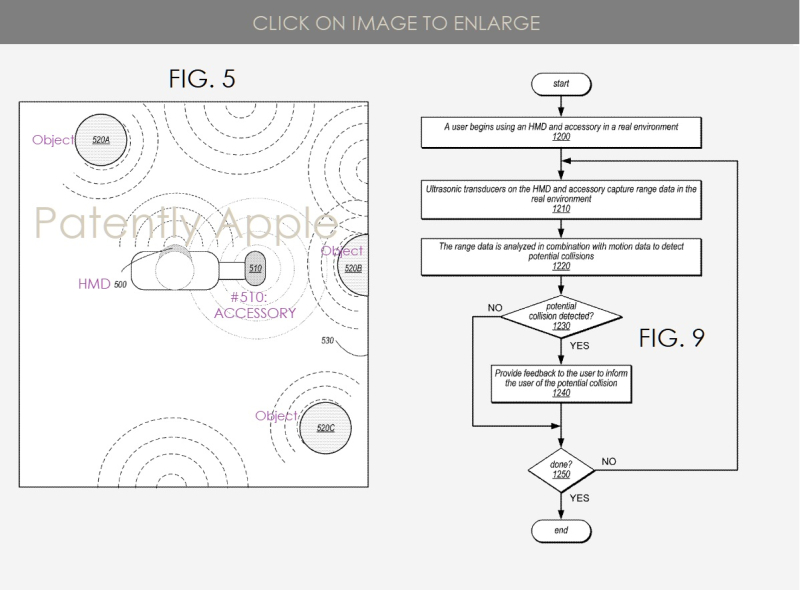 An advantage of using sound over light is that light-based sensors may have difficulty with some surfaces such as glass and mirrors that ultrasonic transducers can easily detect.

In addition, light-based sensors may have problems with light interference in some conditions such as bright sunlight. In some embodiments, a VR/MR system may include both light-based sensors and ultrasonic transceivers, and the range finding data from the two systems may be combined to more accurately map the user's environment.

Also, the user may move their arm about while holding to the accessory to map portions of the room that are not within the range of the sensors on the HMD. In addition, the range finding sensors on the accessory be used to detect potential collisions of the user's hand or arm with surfaces and objects in the environment when the user is moving their arm; the user may be alerted to prevent the collision, for example using audio, visual, and/or haptic feedback.