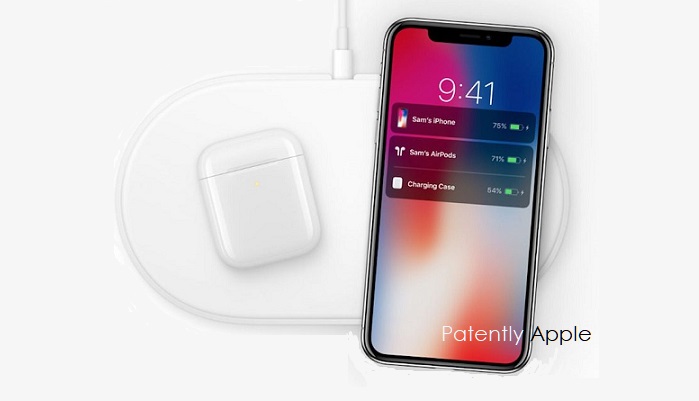 Apple acquired Power by Proxi in October 2017. One of the first patent applications surfacing from Power by Proxi under Apple's name showed that their expertise was with an "object detection system." Such a system is crucial on a multi-device charging pad like AirPower. A user may pull their iPhone out of their pocket to charge it on AirPower and accidentally place along with it an aluminum gum wrapper, some loose change or a transit pass with a magnetic strip on the mat which could cause havoc if not a fire if the charging coils are accidentally overheated. Apple has both acquired and filed patents (01 & 02) working on this problem of foreign objects dumped on a charging pad.

Yesterday a new invention covering this issue surfaced at the US Patent & Trademark Office that reveals that Apple now has a machine-learning-based foreign object detection system.

Apple's invention relates to advancing their AirPower multi-device charging mat with a superior method of preventing the undesirable heating of foreign metallic objects, like keys or coins, by utilizing a machine-learning-based foreign object detection system.

For example, control circuitry may use inductance measurements and other measurements from the coils in the coil array to determine a probability value indicative of whether a foreign object is present on the charging surface. The control circuitry may use a machine learning classifier to determine the probability of an object on the wireless power transmitting device being a foreign object.

The control circuitry may compare the probability value indicative of whether a foreign object is present on the charging surface to a threshold. In response to determining that the probability value is greater than the threshold, wireless power transmission operations can be blocked to prevent undesirable heating of the foreign objects or other suitable action can be taken.

A user of system 8 (AirPower) shown below may sometimes place one or more wireless power receiving devices on it. For example, a user may place power receiving devices #24A and #24B (an iPhone, Apple Watch and one or more additional devices) on AirPower. Foreign objects #72A, #72B, and #72C which represents items like coins, keys, paper clips, scraps of metal foil, and/or other foreign metallic objects may also be present on AirPower's surface #70. 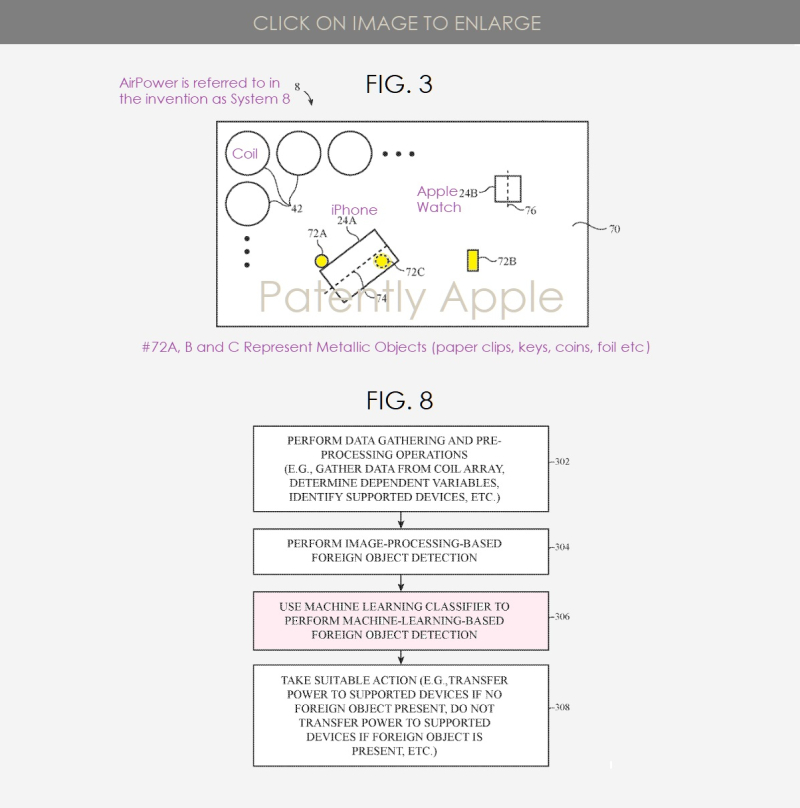 Each wireless power receiving device may have a characteristic pattern of inductance measurements (and/or quality factors and coupling factors) when the device is present on the charging surface.

In some embodiments, when a foreign object is determined to likely be present, control circuitry may generate an alert that notifies a user that the foreign object is present. The alert may be, for example, a visual alert displayed on an iPhone charging on AirPower or an auditory alert emitted the iPhone.

The patent also described a device used by Apple engineers that conducted more than 100,000 trials. In each trial, data such as inductance measurements, quality factors, and coupling factors from the coils were sent to a host device. The host associated data from the coils of AirPower with a desired output of the machine learning classifier (i.e., foreign object detected or no foreign object detected) to train the machine learning classifier.