On Wednesday Spotify filed a formal complaint against Apple with the European Commission about their unfair Apple Store practices. Then yesterday the EU watchdog stepped in with a statement saying: "We have to examine the role of Apple and Apple’s app store," she was quoted as saying. "If we conclude that they have a market-dominating position, then the case would be comparable to our proceedings against Google." Late yesterday Apple addressed Spotify's claims as presented below in full.

"We believe that technology achieves its true potential when we infuse it with human creativity and ingenuity. From our earliest days, we’ve built our devices, software and services to help artists, musicians, creators and visionaries do what they do best.

Sixteen years ago, we launched the iTunes Store with the idea that there should be a trusted place where users discover and purchase great music and every creator is treated fairly. The result revolutionized the music industry, and our love of music and the people who make it are deeply engrained in Apple.

Eleven years ago, the App Store brought that same passion for creativity to mobile apps. In the decade since, the App Store has helped create many millions of jobs, generated more than $120 billion for developers and created new industries through businesses started and grown entirely in the App Store ecosystem.

At its core, the App Store is a safe, secure platform where users can have faith in the apps they discover and the transactions they make. And developers, from first-time engineers to larger companies, can be rest assured that everyone is playing by the same set of rules.

That’s how it should be. We want more app businesses to thrive — including the ones that compete with some aspect of our business, because they drive us to be better.

What Spotify is demanding is something very different. After using the App Store for years to dramatically grow their business, Spotify seeks to keep all the benefits of the App Store ecosystem — including the substantial revenue that they draw from the App Store’s customers — without making any contributions to that marketplace. At the same time, they distribute the music you love while making ever-smaller contributions to the artists, musicians and songwriters who create it — even going so far as to take these creators to court.

Spotify has every right to determine their own business model, but we feel an obligation to respond when Spotify wraps its financial motivations in misleading rhetoric about who we are, what we’ve built and what we do to support independent developers, musicians, songwriters and creators of all stripes.

So we want to address a few key points:

Let’s clear this one up right away. We’ve approved and distributed nearly 200 app updates on Spotify’s behalf, resulting in over 300 million downloaded copies of the Spotify app. The only time we have requested adjustments is when Spotify has tried to sidestep the same rules that every other app follows.

We’ve worked with Spotify frequently to help them bring their service to more devices and platforms:

Spotify is free to build apps for — and compete on — our products and platforms, and we hope they do.

A full 84 percent of the apps in the App Store pay nothing to Apple when you download or use the app. That’s not discrimination, as Spotify claims; it’s by design:

The only contribution that Apple requires is for digital goods and services that are purchased inside the app using our secure in-app purchase system. As Spotify points out, that revenue share is 30 percent for the first year of an annual subscription — but they left out that it drops to 15 percent in the years after.

That’s not the only information Spotify left out about how their business works:

Let’s be clear about what that means. Apple connects Spotify to our users. We provide the platform by which users download and update their app. We share critical software development tools to support Spotify’s app building. And we built a secure payment system — no small undertaking — which allows users to have faith in in-app transactions. Spotify is asking to keep all those benefits while also retaining 100 percent of the revenue.

Spotify wouldn’t be the business they are today without the App Store ecosystem, but now they’re leveraging their scale to avoid contributing to maintaining that ecosystem for the next generation of app entrepreneurs. We think that’s wrong.

What does that have to do with Music? A lot.

We share Spotify’s love of music and their vision of sharing it with the world. Where we differ is how you achieve that goal. Underneath the rhetoric, Spotify’s aim is to make more money off others’ work. And it’s not just the App Store that they’re trying to squeeze — it’s also artists, musicians and songwriters.

Just this week, Spotify sued music creators after a decision by the US Copyright Royalty Board required Spotify to increase its royalty payments. This isn’t just wrong, it represents a real, meaningful and damaging step backwards for the music industry.

Apple’s approach has always been to grow the pie. By creating new marketplaces, we can create more opportunities not just for our business, but for artists, creators, entrepreneurs and every “crazy one” with a big idea. That’s in our DNA, it’s the right model to grow the next big app ideas and, ultimately, it’s better for customers.

We’re proud of the work we’ve done to help Spotify build a successful business reaching hundreds of millions of music lovers, and we wish them continued success — after all, that was the whole point of creating the App Store in the first place." 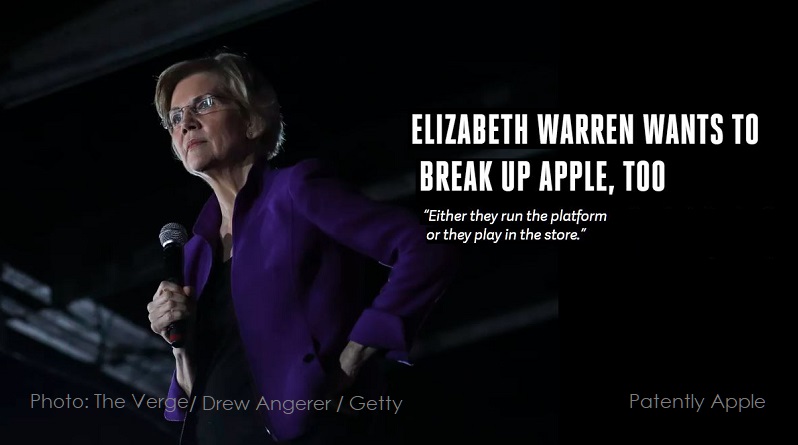 Patently Apple Side Note: Lastly, it should be pointed out that Presidential Candidate Elizabeth Warren made the App Store an issue when talking at the SXSW event over the weekend. I find it disturbing to know that Warren likely had access to what Spotify was about to do in the following days, as in, file a formal complaint against Apple.

It appears that Warren is siding with Europe's Spotify over U.S. base Apple and made the case against Apple on Spotify's behalf. The European Commission is likely to use Warren's argument against Apple. So it begs the question: Why would any Apple fan now want to support Warren's bid for President?