Home Archives Contact Us Subscribe Twitter MeWe Facebook Patently Mobile
While the Smart Speaker Market Grew over the Holiday Quarter, Consumers aren't buying into having one in every Room
A Surprise Granted Patent for Samsung Reveals a Galaxy Note S-Pen Doubling as a Camera with a Superior Optical System 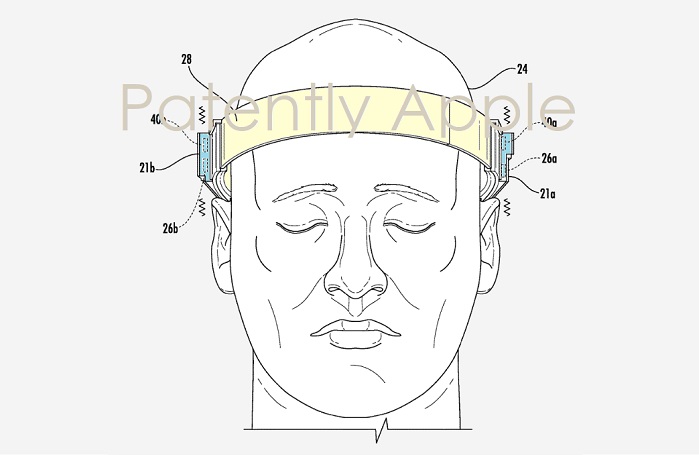 The U.S. Patent and Trademark Office officially published a series of 63 newly granted patents for Apple Inc. today. In this particular report we focus on a single patent covering future devices that could use new haptics and audio output. Other patents pointed out for interest sake cover Apple TV interfaces, touch and hover detection, the lightning connector, finding a parked vehicle and more. We wrap up this week's granted patent report with our traditional listing of the remaining granted patents that were issued to Apple today.

Apple's newly granted patent is one never seen before as a patent application. Their invention covers a wearable electronic device that may include a wearable band and a plurality of audio output transducers carried by the wearable band.

The wearable electronic device includes first and second device housings 21a, 21b. Respective wireless communications circuitry 25a, 25b (e.g. cellular, WLAN Bluetooth, etc.) may also be carried within each respective device housing on the left and right, respectively #21a and # 21b. 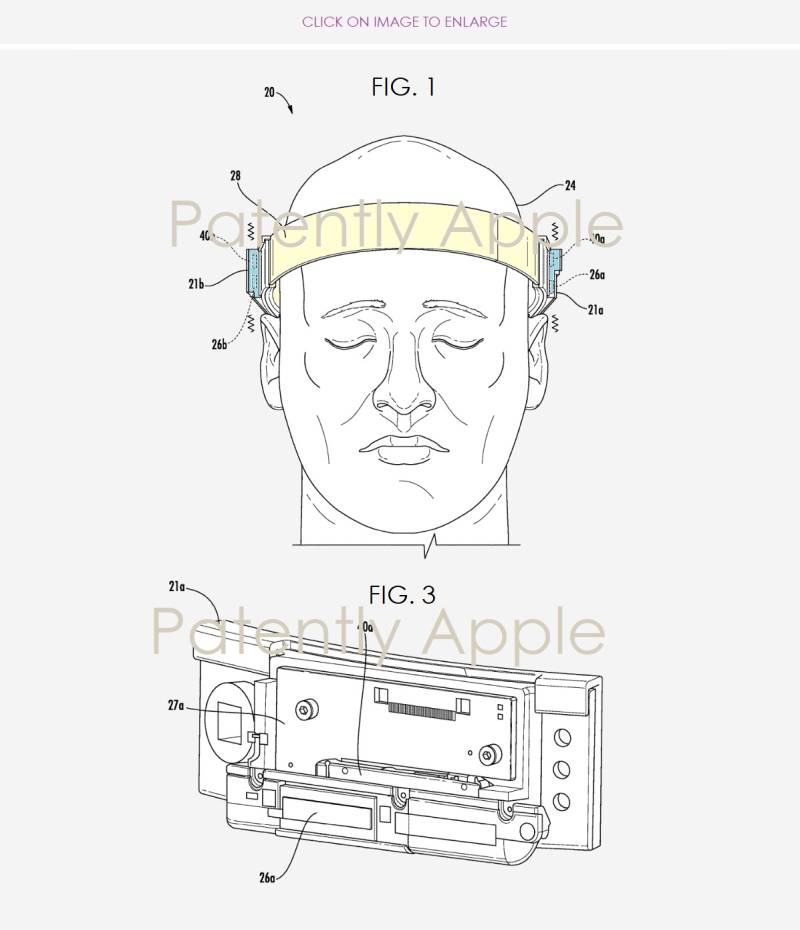 Respective haptic actuators are on each side of the band and shown as #40a and #40b.

Apple illustrates that their invention will apply to a wide range of products including a future headset that may or may not be used in conjunction with an iPhone, future headphones (and more) as shown below. 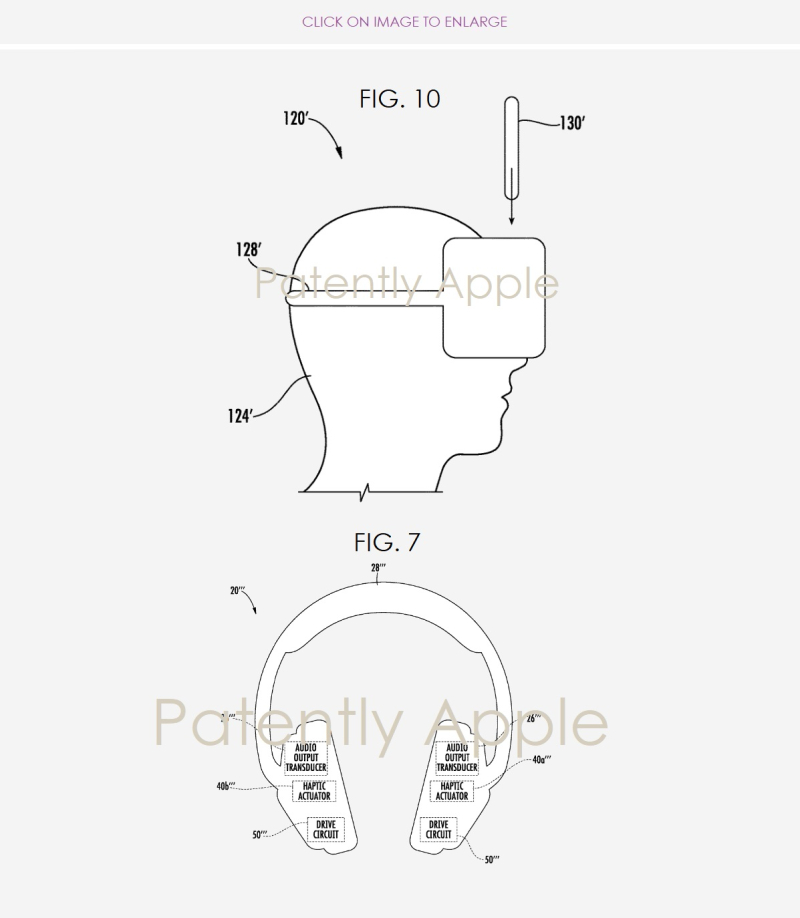 Other random points Apple makes in their granted patent is that the wearable devices will include multiple haptic actuators. For example, a user may play back synchronized waveforms on multiple actuators such that users can feel effects, particularly those involving bass, from a certain direction. A user with a headset may be able to feel a car passing by from the right to left side of the display.

The wearable devices may also augment the low frequency band of sound with by adding a haptic sensation synchronized to speaker outputs. For example, haptic actuators attached near right and left ears vibrate differently to generate stereo haptic effect, which is synchronized to the speaker outputs. A user may feel improved bass sound due to the added vibration.

Still further, the wearable devices may provide haptic notification with directional information. For example, during navigation, a user may differentiate a "right turn" and "left turn" based on the directionality of haptic notification (e.g., a vibration may start from right side and finish at the left side). A rotational effect may also be generated, for example, based upon phase delayed first and second drive signals.

Apple filed for this patent back in September 2017 and granted today by the U.S. Patent and Trademark Office. Concept drawings presented in this granted patent are not design patents, simply illustrations conveying a concept.

Other Granted Patents of mild interest include the following:

04:  Detection of Touch and Hovering (Patently Apple covered this in 2015 and as a first granted patent here.

05: Apple was granted design patents for the Mac Pro tower and an adapter. 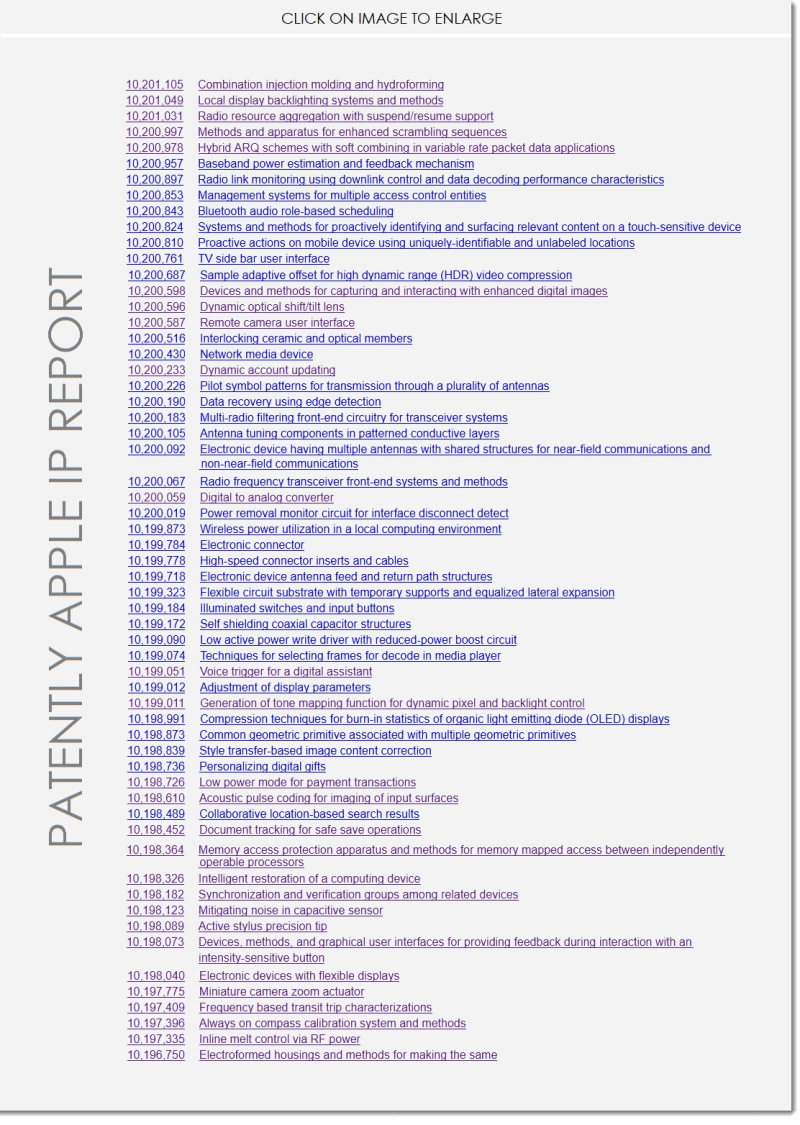