The U.S. Patent and Trademark Office officially published a series of 56 newly granted patents for Apple Inc. today. In this particular report we cover Apple's fifth granted patent for "Electronic devices with environmental sensors" since 2015. Last month Patently Apple covered a couple of Apple's inventions relating to next-gen health sensors for iOS devices and the Mac that could save your life by detecting invisible deadly gasses.

Today Apple was granted patent 10,209,106, one of Apple's first patents relating to environmental sensors that could be added to future iDevices and Macs. The sensors include those being able to sense deadly gas, surrounding temperature, humidity smoke and more.

The emphasis and priority found in Apple's granted patent, and more specifically found in their patent-claims, is without a doubt the gas sensor. Apple's patent claim #18 states in part, "a gas sensor attached to the printed circuit that is configured to measure a concentration of a gas, wherein the gas comprises a gas selected from the group consisting of: carbon monoxide, carbon dioxide, alcohol vapor, propane, ozone, nitric oxide, nitrogen dioxide, benzene, methane, hydrogen, and oxygen."

Apple notes that the new sensors could be positioned in the iPhone's speaker or microphone cavities as noted in their patent FIG. 1 below.

Apple's invention could apply to future products that Apple lists as follows: 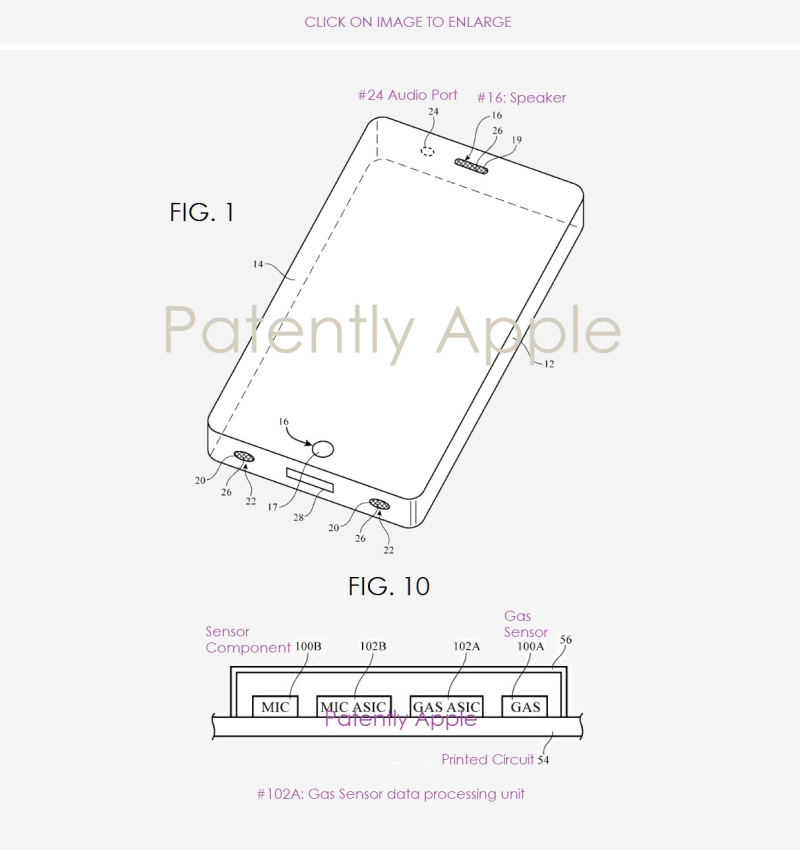 Apple's first granted patent for environmental sensors for electronic sensors describes "the microphone and the gas sensor are formed from a common semiconductor die." That is not listed in Apple's latest granted patent.

For the record, Apple has been working on this project for some time now. Here are other granted patents on the subject of environmental sensors: